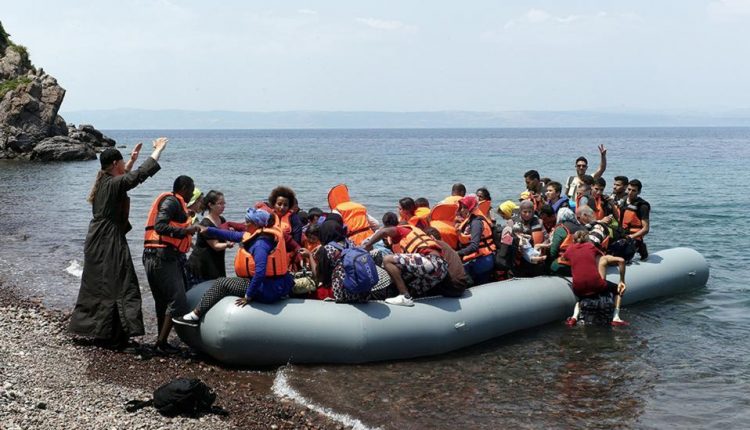 Relations between two countries hit new lows after Turkey’s foreign minister announced the suspension of migrant readmission deal with Greece following a dispute triggered by the Greek court’s release of the Turkish troops wanted by Ankara over their involvement in 2016 coup attempt.

After months of diplomatic wrangling, the EU in March 2016 reached a migrant deal with Turkey in return for visa-free travel for the Turkish citizens. Though the deal sometimes wavered on the brink of collapse, it somehow took hold given the need to stem the tide of migrant flow from Turkey to the EU.

Greece was an important part of the deal as a route for Europe-bound migrants. But apart from the EU-Turkey deal, Ankara and Athens have their own readmission agreement to stop the illegal immigration. Under the bilateral deal sealed in 2001, 1,209 foreign nationals were sent back to Turkey from Greece over the past two years.

The suspension may also affect Turkey’s deal with the EU given the migrants’ desired destination through the Greek islands: the Western European countries such as Germany, Sweden or other prosperous countries.

The latest diplomatic row broke out after the release of last four of eight Turkish military officers who had been in Greek custody after fleeing to Greece on a military helicopter when a coup attempt failed in July 2016. The recent course of the Turkish-Greek relations has been mostly defined by the spat over the extradition of soldiers.

The Greek Supreme Court ruled against the extradition, citing the lack of fair trial and the high risk of torture of the Turkish officers who were portrayed as hate figures by Turkey’s state-run media.

“It is our duty to find these putschist soldiers wherever they are, pack them up and bring them to Turkey,” Turkish government spokesman Bekir Bozdag said after the court decision on Monday.

The tension between the two neighbors quickly escalated after the Turkish F-16 fighter jets intruded into the Greek airspace both on Tuesday and Wednesday amid reports of dogfights in the Aegean Sea.

The Greek officials felt shudder over Bozdag’s remarks. Greek Defense Minister Panos Kammenos vowed to bring the issue to the meeting of NATO defense ministers. After the meeting on Thursday, NATO Secretary-General Jens Stoltenberg said he urged leaders of Greece and Turkey to show restraint and defuse the simmering tension.

As mutual recriminations linger, Greece and Turkey have again found themselves in the middle of a tug of war, with the risk of an inadvertent confrontation getting serious more than ever before.

“What has happened in Kosovo cannot happen in Greece. If Turkey attempts such a thing, this is a casus belli, it cannot be anything else,” ANEL Party Deputy Chairman Panagiotis Sgouridis said on Wednesday.

His reference was to a plot by the Turkish intelligence to capture dissidents of President Recep Tayyip Erdogan in Kosovo in April. The forceful capture of seven people unsettled Kosovo politics and led to the dismissal of the interior minister and security chief.

Sgouridis’ party is part of the coalition government in Athens. He warned Turkey that if a kidnapping attempt takes place, Greece would go to war.

But according to experts, his inflammatory rhetoric does not reflect the Greek government’s approach.

“Greece does not seem to be interested in any escalation due to economic and political concerns. Greece was caught in the crisis of the ‘coup’ as the Turkish troops were not invited to Greece and Greece did not actively attempt to save anybody from Turkish police/justice/army,” Sotirios Zartaloudis from University Birmingham told Globe Post Turkey.

“The problem is that the Greek government cannot do much as the Greek courts have not allowed the extradition of these troops as there is a danger for their life in Turkey (with the threat of potential death penalty or life imprisonment which makes any Greek or European court not able to allow the extradition to a country whereby the threat of life for an individual is high),” he said.

He argues that Greek Prime Minister Alexis Tsipras might have personally made some promises to President Erdogan over the phone, relying on Erdogan’s remarks regarding his dialogues with the Greek prime minister. “… But Tsipras should have known better that in any European (and especially EU) state, the government cannot dictate to courts what decisions to reach.”

He added: “But the Greek government denies any such promises so we cannot really tell what has happened. Tsipras has a record of making too many promises that are impossible to keep so Erdogan may be the one telling the truth here.”

A History of Dangerous Encounters

The emergence of dogfights recalled the days when fighter jets of both countries in the 1990s were wrestling with each other in dangerous closeness in the skies over the Aegean Sea in a bid to secure mastery of the disputed airspace overseeing uninhabited islets.

This year saw the Turkish and Greek boats and navy vessels collided with each other on two separate occasions. As if it were not a signal to deter the countries, the bellicose rhetoric from populist politicians on both side only aggravates the delicate nature of the situation.

“Greece and Turkey ‘fought’ a near-war situation with each other at least once every decade since the 1950s with the notable exception of the past two decades,” Neophytos Loizides from the University of Kent told Globe Post Turkey.

“This fairly quiet period for Greece and Turkey is an outlier in their historical record of crisis behavior as both countries demonstrated restraint during crises. Yet a combination of factors such as the global financial crisis, the conflict over exclusive economic zones (EEZ), the derailment of Turkey’s EU accession and the rise of extremist groups could very easily turn the clock back in the Greek-Turkish neighborhood,” he added with a caveat.

The political calculations and configurations in the domestic realm on both sides are also at play with serious repercussions for the evolution of the turbulent relationship. Loizides, however, dismissed ANEL Party official’s remarks as nothing of substance.

“ANEL as party is not a major player in the Greek political system. The party might not be elected in the next parliament (elections could take place anytime between now and Sept 2019 and polls show ANEL below the 3 percent threshold); they are also facing immediate pressure to overthrow the government as Syriza is negotiating a new agreement on the Macedonian issue which contradicts ANEL’s views on Greek foreign policy and national heritage,” he noted.

“Even so, there is nothing more misleading than to brand current escalations as harmless.” War, he emphasized, is less the result of intentions and more often the result of accidents as suggested by international experience and the recent history of conflict in the region.

Tsipras Faces Dilemma Over Rule of Law and Realpolitik

President Erdogan’s unyielding demands over the extradition of soldiers placed the Greek prime minister in an awkward spot. He found himself treading a delicate balancing act between the respect for judicial independence and the need to handle with an unduly leader, the president of its eastern neighbor.

“Yet Syriza does not control the Greek justice issue and Prime Minister Tsipras could not decide himself on the fate of the eight Turkish asylum seekers. Even if he had attempted to influence the justice system, Tsipras would have ended up in prison by the next government (the Greek political system has become highly polarized and governments routinely use all types of accountability mechanisms to punish opponents),” he added, expounding on the legal and political perils for the Greek prime minister.

Perhaps a lesson from this crisis is for Greece and Turkey to negotiate other bilateral mechanisms to address similar issues in the future and include those in their legal system in a way that is compatible with their mutual interests and the European Convention of Human Rights, he said in conclusion.

Zartaloudis did not appear much concerned about the revival of dogfights. It happens for decades. But the unpredictable nature of populist politics and the ongoing election wilderness present additional risks that could dangerously veer of the track.

“Although given the record of Erdogan in power nobody can be sure about Turkey’s next move as the country has already become too unpredictable and erratic in its foreign policy,” he said.

“The statements of the Turkish government spokesman is in this vein of a country that does not limit itself in terms of policy options as he basically implies that there will be a covert mission in Greek territory by Turkish special forces to abduct the eight Turkish troops.”

If this happens, he noted, it will definitely be a complete departure of Greek-Turkish relations as we don’t have such incident in recent history.

The only source of consolation, both experts argued, would be the fact that deeds do not follow words on most occasions. Apart from some deadly accidents, both sides managed to put brakes before things wandered off the course.

“The only hope for the crisis not to escalate further is that there will be a lot of discourse about them due to the Turkish elections but nothing of a major incident that will jeopardize peace between Greece and Turkey,” Zartaloudis said.