Did Turkey’s incumbent president graduate from a university? Is the college diploma he claimed he presented to media a fake, fabricated one? Why has not President Recep Tayyip Erdogan never showed up with his college friends up to date? Why did none of them visit him at the presidential office, while even his acquaintances from childhood never miss a chance to pose for photos with the president?

We don’t know a single name of his mentors or academics who may somehow have recollections of student Erdogan. Why there is no single line of reference to him in the university yearbooks or not a single photograph showing Erdogan during his college days, either during a lecture or along with his friends or professors?

Make no mistake. We are talking about a president whose ambitions are sky-high and who is set to transform Turkey in his own image and worldview, like no one since Ataturk, the founder of the republic. While countless documentaries and a number of films made about him delve into even smallest details and trivial points of his action-packed life, there is no mention or reference to his college years. The issue has been carefully elided or evaded. Until now.

The question whether President Erdogan has ever graduated from a university is not a new one. But the controversy, as never before, now redefines the nature of political debate during the presidential campaign, and provides additional ammunition to opposition candidates to ruthlessly dig into the matter.

It is a favorite topic for Muharrem Ince, the presidential candidate of main opposition Republican People’s Party (CHP), who, in a swipe at Erdogan, pledged to show up with his college friends when he launched his presidential campaign.

He even distributed copies of his diploma to media members along with his friends in a bitter swipe at the president.

Erdogan who is not fond of even a small hint of dissent and frequently goes to courts to file complaints against his thousands of critics has not lodged a single lawsuit against claimants questioning his college credentials. Because if he does, it might require the court to seriously deal with the matter, investigate it by demanding university documents; thus it may further expose the president to peril.

This point has become a source of mockery in social media where people encourage one another to take jibes at the president over his diploma.

The issue is no an ordinary matter of political controversy. The authenticity of Erdogan’s college degree certificate, the possibility of no university education at all has profound implications for Turkey’s politics. According to Constitution and laws regulating who can be elected as president and who not, any aspirant presidential candidate is required to be a college graduate and over 40 years old.

This means if Erdogan’s diploma is fake, it, in normal times, would disqualify him from the office and his occupation of the presidential palace since 2014 would be rendered completely illegitimate. Erdogan might have somehow managed to cast aside the matter out of the public spotlight, thanks to a pliant media, but the allegations of illegitimacy appear to haunt him to the last day of his tenure, at least in the eyes of the opposition.

The issue came to media spotlight when President Erdogan first ran for presidential office in 2014. When people demanded the original version of his diploma, the access to the archive of Marmara University has been blocked by a ruling of Istanbul 5th Criminal Court of Peace on July 18, 2014. The block later was lifted.

Under incessant fire, Erdogan and Marmara University released different documents about the president’s college degree. Instead of dispelling doubts or ending the quarrel, it further fueled questions, starting a new dispute over the presented documents.

The public controversy about the president’s eligibility took a new turn in June 2016 as entire social media devolved into a frenzy over the matter.

Former chairman of the Association of Judges and Prosecutors (YARSAV), Omer Faruk Eminagaoglu, appealed to the Supreme Electoral Council (YSK) to declare Erdogan’s presidency null and void. In a 29-page document he submitted to YSK, he argued that the council failed to process a required review of Erdogan’s eligibility regarding the diploma issue in prior to the 2014 presidential elections.

He also urged the office of Ankara Chief Public Prosecutor to launch an investigation to find out that whether Erdogan forged his documents indeed.

“There are currently three documents available: a temporary diploma, a copy of the diploma and a certificate issued after the diploma’s registration. And there are some suspicious discrepancies between these three documents,” he told Sputnik International in June 2016.

“Therefore,” he added, “we insist that this matter is properly investigated.”

“I am telling President Erdogan that your diploma is fake, he doesn’t sue me. If it were something else, he would have done that a long time ago,” Bianet quoted him as saying on June 2, in 2016.

The pro-Kurdish People’s Democracy Party (HDP) joined the fray that summer and pressured Education Minister Ismet Yilmaz to probe the claims. The YSK provided a notarized version of the first document dated 1981 about Erdogan’s degree.

But it failed to persuade the Kurdish politicians who pledged to pursue the matter with rigor.

A recent report from Grihat reveals contradictions in Erdogan’s claims about his college education. 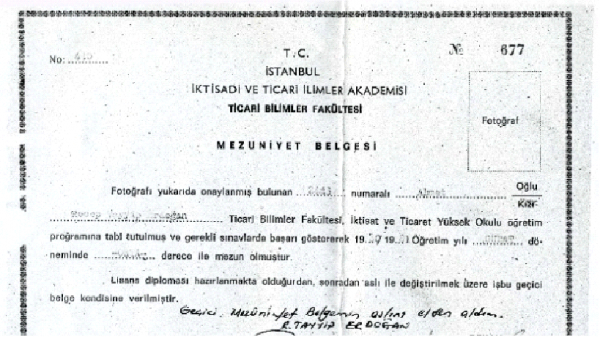 At the center of the controversy lies a number of palpable discrepancies.

The first document is a temporary diploma shows Erdogan graduated from Istanbul Academy of Economics and Commercial Sciences in 1981. Upon persistent demands from the opposition for the original version, not a temporary one, a new document was shared two years ago and it was a different one. 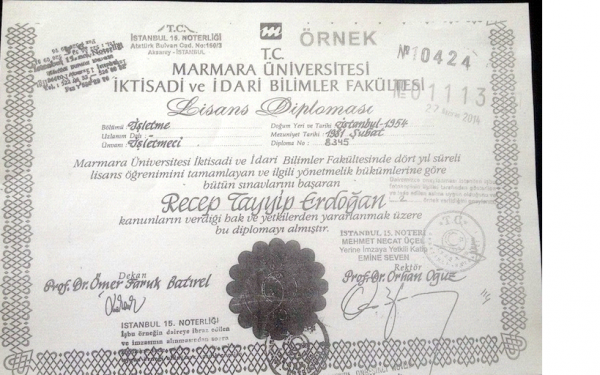 According to this document, Erdogan seemed to graduate from the Faculty of Economics and Administrative Sciences of Marmara University in 1981. At the bottom, two signatures, which belong to university rector and the dean of the faculty, could be seen. Here problems emerge.

The problem with the documents does not end there.

According to journalist Umit Zileli, there some technical contradictions and errors in the preparation of the documents.

In the temporary diploma, it should be written “temporary finish certificate,” not “graduation certificate.” The document says the photo approved, but there is no photograph in the document.

In the first temporary document, there are two numbers given. It is illegal. Every diploma or certificate has only one serial number, says Zileli.

Another problematic point is that vocational high schools or academies during the 1980s are run by directors not by deans as mentioned in the document. And more important, a student, Erdogan, signed the first document himself to declare that he did indeed take the paper from the faculty, while normally students were not allowed to do that.

The notarized version of diploma also did not alleviate ensuing debates. And Erdogan’s office provided the third version, only to cause further controversy. 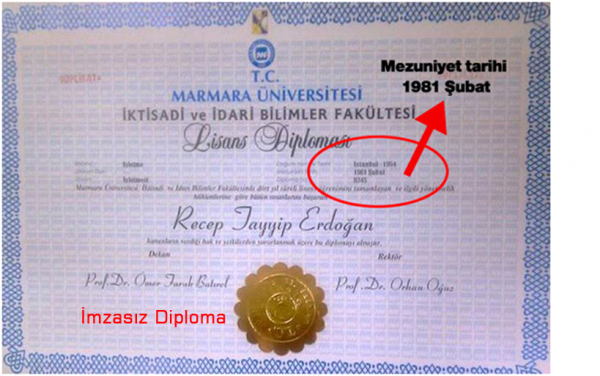 Critics believe that the latest version was probably prepared by Erdogan’s office. But they seem to forget adding the signatures of the rector and dean existent in the previous document.

According to Grihat, the latest one was either written in Calibri Font produced by Microsoft in 2005 or 2008-date Malgin Gotic Font. There was no such type of writing in 1981 in an official document.

“There are two different diplomas, one prepared by Erdogan and the other one by Marmara University. We have a president who has two different documents both of which are forged,” leftist-nationalist writer Gokce Firat Culhaoglu said of the presented “original versions.” He was one of the figures questioning Erdogan’s college credentials and was imprisoned after the failed coup.

According to the tale presented by critics, Erdogan needed a diploma to evade long-term military service. And he copied the diploma of his lifelong friend Ali Ibis who graduated from Istanbul Academy of Economics and Commerical Sciences. The first temporary certificate shown above enabled Erdogan to serve in the military for a shorter period.

Laws regulating military personnel and military service allow those who finish a four-year university to carry out a short compulsory service in the Turkish military. Turkey has a conscription system and every capable man who reaches 19 years-old are required to serve in the military.

Another detail cast doubts over the president’s occasional references to his college years.

According to insurance records, Erdogan appeared to be working full-time at the Istanbul Electric Tram and Tunnel Company (IETT) during the same college years he sometimes mentions. He seemed to be a very busy man, taking part in activities at the youth branch of Islamist National Salvation Party (MSP), parenting his children along with his wife Emine Erdogan. He had had a very vibrant social life.

How such a busy man could find enough time to go to four-year faculty apart from his daily full-time work and duties is a great deal of mystery.

The emergence of new findings may not have an immediate impact on the election or behaviors of loyal voters. They do not seem to be swayed by the torrent of debates or controversial “original versions” of Erdogan’s diploma. And the opposition is well aware of the realistically dim prospect of any direct change after the dispute. Still, it has a psychological impact and Erdogan appears impotent to counteract the line of attacks over this controversy.

In a parliamentary session last month, Mustafa Balbay, a CHP lawmaker, called on Turkey’s High Election Council (YSK) to look into the issue.

Metin Kulunk, a lawmaker from the ruling Justice and Development Party (AKP), came to the defense of Erdogan by downplaying the role of diploma in a politician’s life.

“Politics is not done with a diploma. The diploma is only a piece for a combative man who touches hearts. If someone says “If there is no diploma, then you cannot be in a position of representation,” he should read the history of prophets,” he said in April.

Big fights, he argued, can be carried out by those unsung heroes who are not heard of and who have no diploma. In his line of argument, a diploma/certificate means nothing at all for big leaders who leave their mark in history.

His remarks would be an unwitting admission of lack of a degree. Kulunk’s revelations carry additional weight given his companion with Erdogan from their youth days. They closed ranks well before Erdogan became Istanbul’s mayor and even his thrust to political life. Given their lifelong friendship, after all, he is in a position to be able to know and tell whether Erdogan went to a college.

The issue has become a hot topic of political conversation at the national level, with Ince never relenting his attacks against Erdogan.

“It is not me who demands diploma. It is the constitution. You have to show it as constitution demands,” Ince said this week.