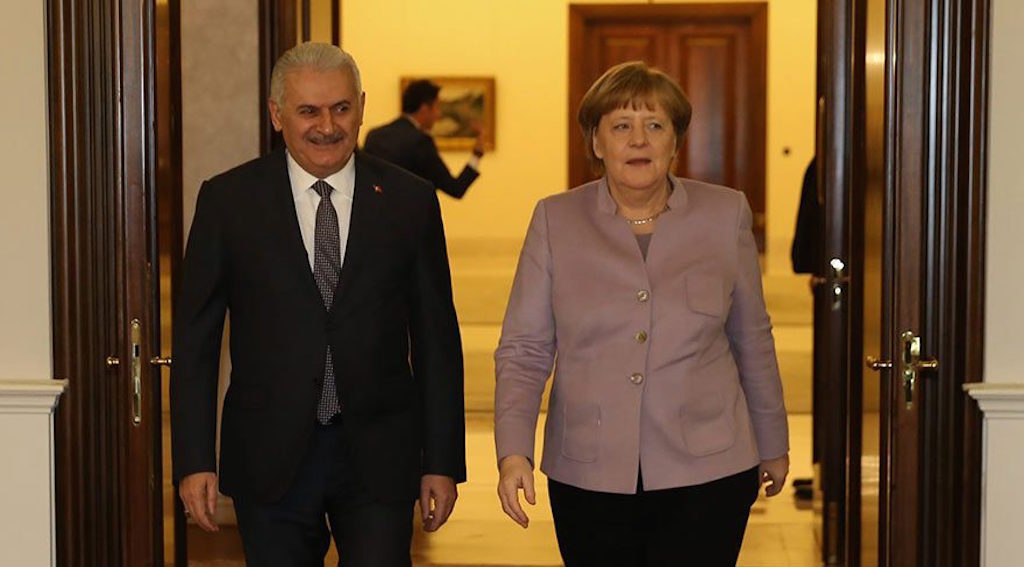 Hopes for an improvement in Turkey-Germany relations plagued by a number of contentious issues over the past two years quickly unraveled after Turkish prime minister’s meeting with German Chancellor Angela Merkel in Berlin on Thursday. The meeting failed to produce any progress, rather exposed lingering obstacles before a full-fledged thaw in ties.

“I said during the talks that we hope for a fast and constitutional (judicial) process for Deniz Yucel,” the German chancellor said, calling on the Turkish leaders to remain loyal to the principles of rule of law.

She dismissed expectations for an improvement in relations. Ms. Merkel said she saw many hurdles in the way of normalization of ties.

In an interview before the meeting, the Turkish prime minister spoke very positively about turning a new page on the strained relations. “Let’s forget the past and look into the future,” the prime minister said.

During the press conference, he stated that journalist Yucel’s case should not affect bilateral ties.

“We do not want these and similar matters to harm relations between Turkey and Germany.”

No Thaw in Offing

Turkey’s relations with Germany in particular and EU, in general, repeatedly veered off track and plunged into a series of diplomatic spats over the past two years. President Recep Tayyip Erdogan’s crackdown on domestic opponents in the aftermath of a botched coup in 2016 and the purge of more than 150,000 public workers spurred wide-ranging criticism from Brussels.

“The relationship between Turkey and the EU and Germany is a very rocky one. There is no progress in the negotiations in sight, and both sides are eager to fulfill their commitments regarding the EU-Turkey-Agreement,” Professor Thomas Jäger from Koln University told Globe Post Turkey.

“Nobody wants to be blamed if the relationships erode further,” he said. But, he cautioned against the argument of looming breakdown, “the EU and Turkey don’t stand on the edge of an abyss.”

According to Mr. Jäger, the big challenge is Turkey’s course of action in Syria.

Turkey’s military offensive against Kurdish enclave of Afrin to uproot a U.S.-allied militia from the border town ignited criticism from its Western allies, including Germany which called for an emergency NATO meeting to discuss the fallout of Ankara’s move.

The Afrin offensive also placed a hold on talks between the German and Turkish governments to modernize German Leopard tanks at Turkey’s disposal after some columns of tanks were spotted rolling in northern Syria.

During the joint press conference, Prime Minister Yildirim faced questions over civilian casualties and the unfolding humanitarian tragedy in Afrin. He invited a journalist to come to the town to see the situation with his own eyes. The Turkish authorities unflinchingly dismiss reports of civilian casualties as “terrorist propaganda.”

One of the unwitting implication of Turkey’s military endeavor is the existence of an inadvertent confrontation between the Turkish and U.S. forces if Ankara expands the current military operation toward Manbij where the U.S. troops are stationed.

If a clash between U.S. and Turkish forces cannot be avoided, Mr. Jäger, argued,  absolutely new circumstances had to be addressed. And the repercussions will be huge.

Josef Janning, Head of Berlin Office at European Council on Foreign Relations, said the relationship between both countries is in a phase of redefinition.

“It no longer can be based on the accession paradigm as both sides have moved away from it, though both will stick to the accession option on paper for different reasons,” he noted.

Though Germany appears as the most vocal critic against Ankara over human rights violations during the state of emergency and erosion of democracy in the post-coup era, the realpolitik and the need for cooperation prevents a complete collapse of the fragile relationship.

“Relations now are defined by the self-interests of each side, and by the degree of overlap or complementarity between them,” Mr. Janning told Globe Post Turkey. “The refugee deal is evidence to that approach; it works despite not being fully implemented because it meets essential interests of both sides.”

The arrest of a number of German nationals remained a sore point in bilateral ties. Though Ankara recently released some German citizens from Turkey’s jails, it stubbornly declined any demand for the release of Journalist Yucel.

Yucel, Mr. Janning said, is a special case. “To the German side, the duration of his imprisonment without any proper trial is evidence to the broken legal system in Turkey. Berlin will demand his release, but lives with his imprisonment as a showcase for the inability of Turkey to become a member of the EU.”

To the Turkish side, he added, Yucel is a symbol of Turkey’s parity with Germany, a key to continued attention to Turkey and incentive to engage with Turkey.

According to him and many other observers of Turkish politics, Western nationals, including German and the American ones, unwittingly ended up in Turkey’s jails as hostages to be used as bargaining chips in diplomacy.

Whether there could be a complete transition from the current state of relationship to trouble-free ties is a matter of great controversy. The visiting Turkish prime minister offered to open a new, white page.

But the meeting itself exposed the limits of his overtures and the unpleasant world of realities.

Mr. Janning still retains his optimism. “The change towards such a transactional relationship is possible and could make for a quite active relationship as both sides have important interests which make it advisable to engage with the other side,” he said.

In contrary, ProfessorJäger was cautious.

Can there be a reset in the relations? “In the long run, yes,” he said. “For the foreseeable time to come, both sides will take up their contradicting position.”