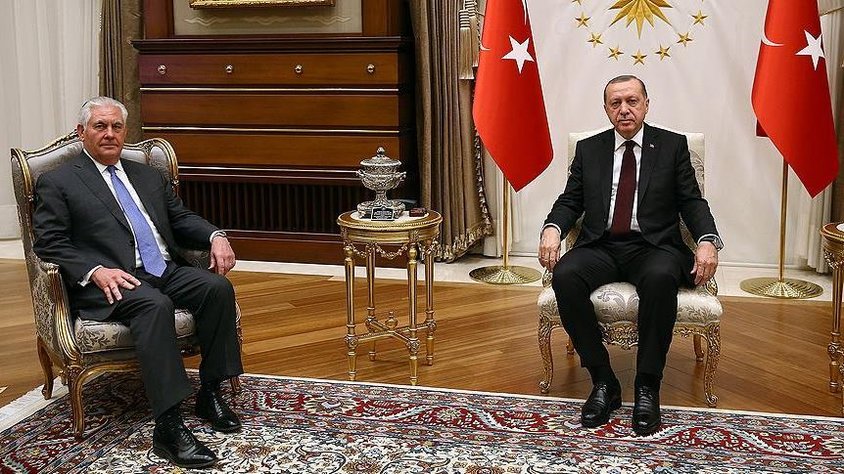 U.S. Secretary of State Rex Tillerson met with Turkish President Recep Tayyip Erdogan in Ankara on Thursday amid an ensuing tension between Turkey and the U.S. over the former’s military offensive in northern Syria and the American backing of Syrian Kurdish militia.

The meeting, which unexpectedly lasted longer than planned, about 3 hours and 15 minutes, came as authorities from both countries sparred over the U.S. arms supply to Kurdish People’s Protection Units (YPG).

A statement from Turkish presidential office said Turkey’s expectations and priorities have been conveyed to Mr. Tillerson during the meeting. Both leaders also discussed bilateral relations, regional politics and cooperation against terrorism.

The quarrel over the U.S. alliance with Kurdish militia which Ankara views as a terrorist group never seems to evanesced between two allies while Secretary of State Rex Tillerson claimed that Washington has never supplied heavy weaponry to the militia.

“We have never given heavy arms to the YPG  so there is none to take back,” Mr. Tillerson said in response to a question at a press conference in the Lebanese capital Beirut before heading for Ankara.

Turkey has repeatedly accused the United States of massively arming the YPG, and has said Washington must gather up its weapons now that the peak of the fight against jihadists has passed.

Turkey’s President Recep Tayyip Erdogan earlier this month accused Washington of sending in 5,000 truckloads of weapons to the YPG in Syria, as well as 2,000 planeloads of arms.

“The United States says ‘we have cleansed (the area) of Daesh’,” President Erdogan said, using an Arabic acronym for the group.

“So if you have cleaned it from Daesh then why are you still here?” he asked.

The war of words took a new turn when President Erdogan threatened with the U.S. with an Ottoman slap. On Thursday, Prime Minister Binali Yildirim said Turkey would fight the U.S. if it fights alongside with the YPG in a possible Turkish operation.

On Jan. 20, the Turkish military launched an offensive against Kurdish militia in northwestern Syrian enclave of Afrin. Now, the whole debate revolves around Mr. Erdogan’s pledge to attack Kurdish-held Manbij, which is home to U.S. special forces.

An expansion of Turkish offensive raises the specter of an unwitting confrontation between the Turkish and the U.S. forces in Manbij.