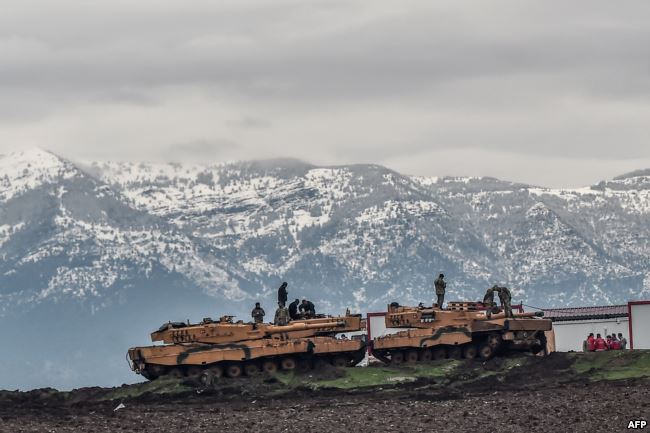 As a large convoy of Turkish military vehicles was heading to southern Aleppo from Idlib province, the Syrian regime elements and Iran-backed militia opened fire at Turkish forces while Russian warplanes dropped bombs to halt the advance of the convoy, reports from local sources said on Monday.

The episode played out when a 50 to 60 Turkish military vehicles escorted by al-Qaeda-linked Hayat Tahrir al-Sham (HTS) were taking the route from Idlib province toward Al Eis.

5/ Here is another video of the Turkish army convoy when it was still driving earlier through Idlib before the Russians started bombing the route. I am just sharing it so you know how big this convoy is. @akhbar pic.twitter.com/iaOBR8Se0Q

Journalist Jenan Moussa reported that the convoy was going to Al Eis, a rebel-controlled frontline that was facing the Syrian troops and its allies. The Russian warplanes took off from their base from western Syria and opened warning fire to halt the convoy, rebels said on social media.

The Iranian militia and the Syrian regime forces also opened fire against the Turkish military convoy, triggering a response from the Turkish forces.

The Turkish officers reportedly sought air support from Ankara. The vehicles turned their lights off while the Russian warplanes flew over. They returned to their initial positions in the de-escalation zone in Idlib province.

The Turkish F-16 fighter jets also entered the Syrian airspace moments later. The episode exposes the underlying risks of the complex battlefield where a diverse set of adversaries and regional power players have forces on the ground, dangerously close to each other in the northern part of Syria.

The Turkish forces have already launched an offensive against Kurdish enclave of Afrin after Ankara secured the consent of Russia which controls of the airspace of Afrin. The Turkish military and its rebel allies aim to uproot Kurdish militia People’s Protection Units (YPG) from the city.

Turkey is in 10th day of the operation and seized control of strategic Mount Barsaya overlooking Afrin on Sunday. The picture captured the national imagination, decorated front pages of almost all newspapers, lifting animal spirits.

The entire nation, except many of Turkey’s disgruntled Kurdish population and other critics, appears on a war footing. But the realities of the battleground defies the simplistic narrative of the government and the loyal media as fast-moving developments often leave official accounts incomplete and misplaced.

The hilltop proves to be a strategic prize for the Turkish forces but it slid out of its control after the first attempt to capture it last week. With its second capture, Afrin now falls within the reach of Turkey’s formidable  T-55 self-propelled howitzer Firtina, which covers a range up to 45 kilometers.

Bad weather and thick of mud previously hampered the efforts of poorly organized rebel forces and the Turkish troops in their bid to advance against Afrin. So far now, at least seven Turkish forces have been killed.

The Syrian Observatory for Human Rights said more than 40 civilians were killed in Turkish airstrikes and shelling. Ankara refuses death toll for civilians as terrorist propaganda.