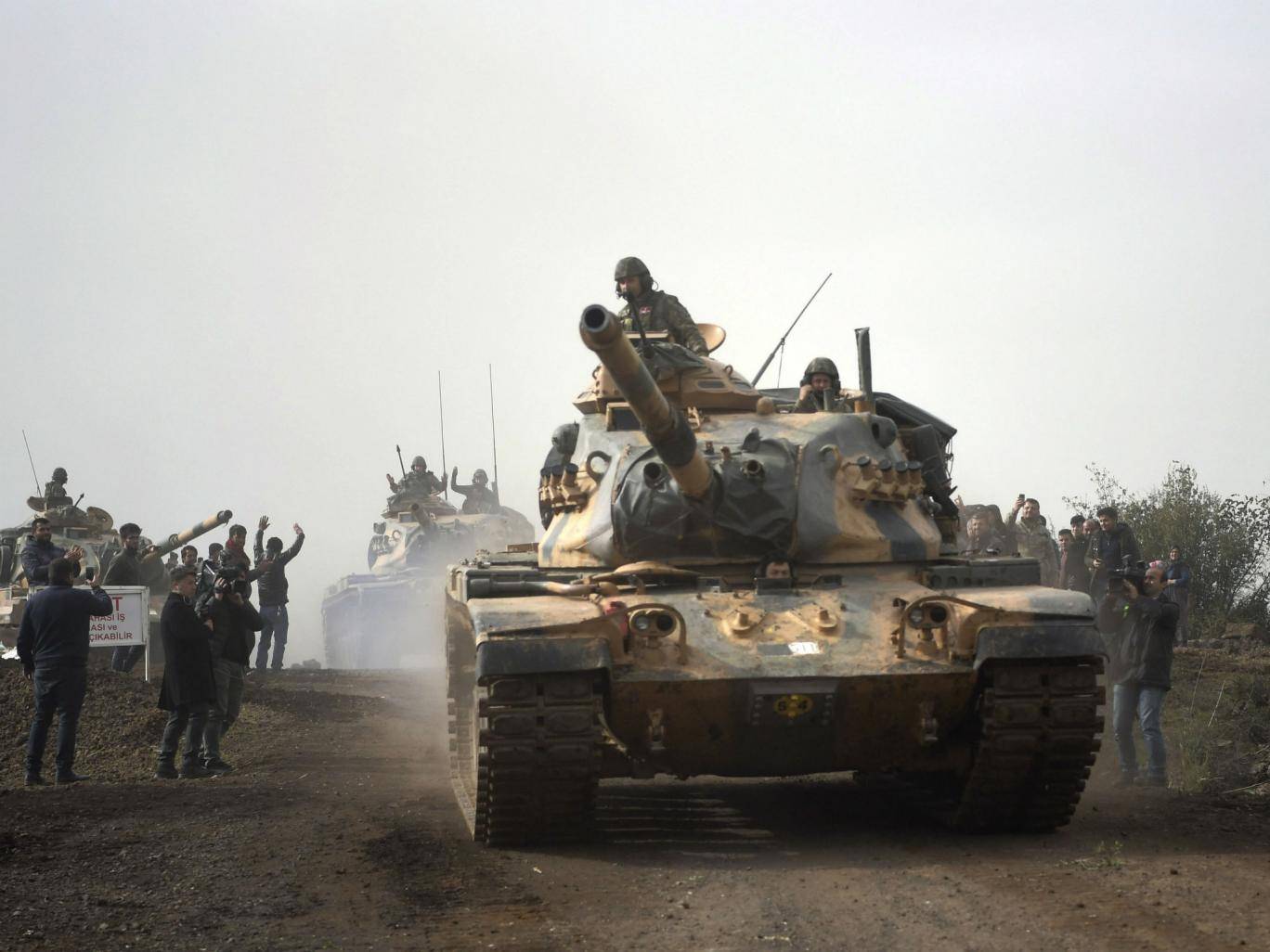 Political winds of a strident nationalism have swept the political and public landscape in Turkey after another foray into the complex theater of Syria. Facing the potential charges of treason and being unpatriotic, Turkey’s opposition parties, except the pro-Kurdish party, had little choice but to close ranks around the country’s president to support his latest bid.

On Saturday, after months of signals, the Turkish security forces have launched a long-anticipated offensive against Kurdish enclave in northern Syria in an effort to uproot the Kurdish militia from Afrin.

The central objective of the military offensive is to crush the hold of Kurdish People’s Protection Units (YPG) across the Turkish border and blunt its buoyant aspirations for a statelet in northern Syria.

Turkey’s festering grievances over the U.S. military alignment with the Kurdish armed group, the brethren of Ankara’s arch-nemesis Kurdistan Worker’s Party (PKK), burst into open rancor after the revelation of a U.S. plan to form a new border force. The planned 30,000-strong new border guard units has the unmistakable air of a small army, trained and equipped by the U.S., Turkey’s NATO ally, and spooked the Turkish leaders who saw in the U.S. initiative the formation of a menacing force capable of threatening its national security.

President Erdogan and a coterie of his underlings swooped to unleash scathing criticism of the U.S. for building an “army of terror” on Turkey’s southern border. Turks have, over the past few years, catered to the view that the U.S. military alliance with Kurdish militia was not temporary and had some sinister, insidious form detrimental to Turkey’s century-old security interests.

The border force plan has, therefore, only aggravated Ankara’s long-simmering fears of usurpation of the territorial status quo in Syria by a new actor. Subsequent U.S. efforts to offer reassurances have failed to alleviate the suspicion and the sense of betrayal on the side of Turks.

Regarding Afrin, President Erdogan pushed brinkmanship into dangerous levels, plunging Turkey into the powder keg of northern Syria after getting the consent of its newfound working partner Russia for an offensive against the Kurdish-held town. Grudgingly, the Russians conceded to Turks’ pressing demand in exchange for more cooperation in Idlib in favor of the Syrian regime.

According to international media reports, it also extracted concessions from Ankara that Turkey would cede control of Afrin to Damascus once it captures from the Kurdish militia. The U.S. warned Turkey not to take action in Afrin. But Ankara defied the pressure from Washington in a strong display of go-it-along determination that later nudged the U.S. position to budge, acknowledging Ankara’s security concerns.

At home front, the offensive has galvanized not only Mr. Erdogan’s loyal constituency but also large segments of the society.

“Our support for the Afrin operation has been full and unquestionable. The offensive is the right one and a necessary step. We wish quick success for our military,” CHP Deputy Chairman Bulent Tezcan said on Sunday.

But he also urged for pressing diplomacy along with the military measures against the militia, and spoke out against the politicization of the operation for domestic goals. CHP leader Kemal Kilicdaroglu cooled down his initial criticism and said the “Operation Olive Branch” was inevitable.

Otherwise, he could risk placing the party in a dangerously perilous state. Being seen less patriotic at this particular moment amounts to a political suicide for any party.

MHP had already been on board, given its strident opposition to Kurdish political and military movements both in Turkey and its near vicinity. MHP Chairman Devlet Bahceli immediately hewed to President Erdogan’s call to arms.

In a statement after the launch of the operation, MHP leader Devlet Bahceli called for putting aside all political and ideological differences for a common cause, for a national objective to defeat the plots hatched against the country.

He blamed the U.S. for leaving the ground to the terrorist groups, PKK and YPG, in northern Syria. Given MHP’s late realignment with President Erdogan’s ruling Justice and Development Party (AKP), his endorsement did come as a surprise.

The Turkish leader’s bold gamble gave him a broad sway over his rivals, animating the swelling fervor of nationalism beyond his base, and robbing his discontents of the tools to challenge him through employing even moderate criticism.

Former President Abdullah Gul who recently embroiled in a publicly playing out spat with his successor voiced support for the military operation.

Even Mr. Erdogan’s most serious rival, Meral Aksener, the rising nationalist politician, suspended her fires against the president on other fronts. Her nationalist leanings were also on vivid display when the Turkish forces had plunged into Jarablus and al-Bab in 2016. She voiced support and quick success for the military without casualties.

The only critical party was pro-Kurdish People’s Democracy Party (HDP). HDP lawmaker Ayhan Bilgen and other party representatives blasted the Turkish foray into Afrin, saying it would irreparably hamper efforts to resolve the Kurdish conflict in a peaceful manner.

“Do people have to die for your seat? Do they have to die for your sultanate? You say “we are going to sacrifice our sons,” but each of your sons [somehow granted] exemption to [compulsory military service] either by medical report or compensation,” said a previous statement belonging to jailed HDP co-chair Selahattin Demirtas and shared by the Kurdish party this week.

The military endeavor, though, has won praise and backing in unlikely quarters of the society. Turkey’s urbanized, secular Turks in affluent cities leapt to the praise of the army.

Supporting the war has indeed become a natural default position for Turks of any social affiliation. The display of valor and praise for the soldiers has transcended boundaries of political identity, cut across the social strata, erasing the borders between social cleavages thanks to the power of social media.

It has even become a must, an inevitable act of duty to display their patriotism through whatever available means, including photos, caps, memes, tweets, posts on any medium.

From soccer stars to celebrities, from singers to social media stars, influential figures posted tweets and photos in praise of the military.

The coarsening effect of the militarist nationalism and the drumbeats of the war appear to further chip away the remaining guardrails and safeguards of Turkey’s democracy.

The democratic landscape has already been shredded by the post-coup crackdown on media, opponents, forms of dissent and civic liberties. To make matters worse, the war threatens to entirely choke the freedom of speech as the criticism of the operation has been officially declared synonymous with treason. So far now 91 people have been detained. Probes are launched against Kurdish lawmakers for their criticism of Afrin operation.

The government has launched a mobilization on all fronts to control the media narrative and shape public opinion. Officials no longer need to show any scruples over media freedom. Prime Minister Binali Yildirim on Sunday handed 15-point demand list to media representatives for patriotic media coverage of the operation.

Turkey’s advance against PKK-affiliated YPG in northern Syria has inexorably led to three immediate consequences in the domestic political landscape: the resurgence of Turkish nationalism, Mr. Erdogan’s ever-tightening grip over media and politics, and further weakening of the opposition parties.

All three have buttressed the president’s precarious political situation, offered him a new opportunity to steer clear of political tribulations amid signs of economic troubles, the decline of support for his 2019 presidential plans according to results of recent surveys.

But it all depends on the success on the ground in Syria. So far now three Turkish military members have been killed. If the casualties mount to a level that the public cannot accept, things could go awry for the president and his government.