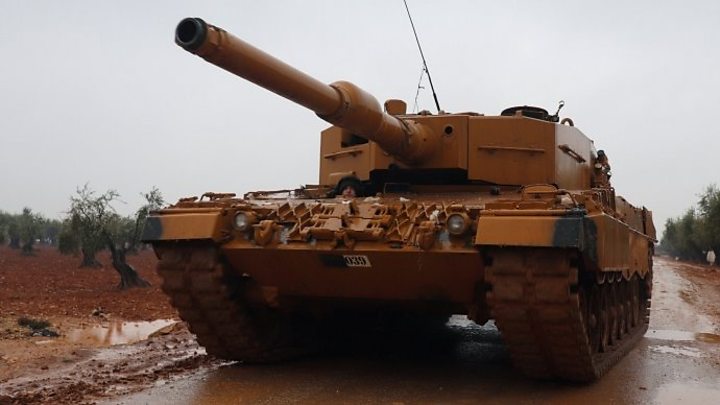 President of France and Turkish leadership plunged into a quarrel over Turkey’s military offensive against a Syrian enclave after the French leader warned Ankara that its operation should not turn to a full-scale invasion of northern Syria.

“If it turns out that this operation takes a turn other than to fight a potential terrorist threat to the Turkish border and becomes an invasion operation, (then) this becomes a real problem for us,” French President Emmanuel Macron said in an interview with Le Figaro on Wednesday.

Mr. Macron’s remarks, expectedly, ignited a fierce backlash from Ankara. “If France is interpreting this issue as an [invasion], we need to assess what they have done in Syria accordingly,” Turkish Prime Minister Binali Yildirim said in response.

He said the operation was launched to protect Turkey’s borders as well as local communities such as Kurds, Arabs and Turkmens from terrorist organizations.

Turkey is not acting with an invasion mindset, he demurred.

The French president also urged Turkey to act in coordination with its allies. He also called for deeper and constant coordination between European allies.

The Turkish incursion into northern Syria drove a wedge between Turkey and its Western allies. Ties with the U.S. devolved into new lows, with the specter of an unwanted showdown looms large as a serious possibility, leaving authorities on both sides dreadful over such a scenario.

Gen. Joseph Votel, the commander of U.S. Central Command, tried to assuage jolted nerves, telling reports that a “robust” coordination mechanism exists to avoid such friction. The “U.S. is doing everything we absolutely can” to avoid a confrontation with Turkey in Syria, he said on Wednesday.

The unswerving U.S. commitment to the alliance with Syrian Kurds has afflicted its relationship with its NATO ally. Gen. Votel, the U.S. top commander for the Middle East, felt a compulsion to emphasize that Washington recognizes that “Turkey has a very legitimate concern about security along its border.”

But such remarks fall short of offering reassurances to Turks who unflinchingly demand cut of U.S. ties to Kurdish militia Ankara deems as “terrorist.” The disparity in views of YPG, and Kurdish-dominated Syrian Democratic Forces (SDF) risks jeopardizing the U.S. and Western efforts to completely snuff out the remnants of Islamic State after a protracted battle to uproot the extremist group from cities and towns across northern Syria over the past three years.

Though the U.S.-backed Kurds and its Arab allies captured Raqqa, the capital of self-proclaimed Islamic Caliphate, last year, the U.S. military appears reticent for the final declaration of victory against ISIS group.

The revelation of a U.S. plan earlier this month to build a new border force marked the tipping point for Turkey, which then plunged into a new front in nortSyriasYRIA to take Afrin from YPG.

Turkey’s Afrin operation exposes riddling web of interlocked rivalries, rapidly shifting realities on the ground and the specter of new lines of confrontation among a diverse set of rivals. Without Russian consent, observers construed, it would be nigh-impossible for Turkey to take action against Kurds in Afrin given that Russian warplanes command the airspace in that region.

The Syrian regime threatened to shoot down any Turkish warplane if they cross into Syrian airspace but so far now it has not taken any action.

Two days after local sources reported that a car bomb attack targeted Turkish military convoy in Idlib, presidents of Russia and Turkey reached a new accord on Wednesday to ramp up de-escalation efforts in the Western province of Idlib.

Turkish President Recep Tayyip Erdogan spoke to his Russian counterpart Vladimir Putin on the phone to evaluate the Sochi talks between the Syrian opposition and government.

During the summit capped and interrupted by heckles and boycotts, an agreement was reached for a new constitution in Syria. In absence of boycotting Syrian opposition representatives, the Turkish delegated represented them.

Both the Turkish and Russian leader hailed the summit result as a serious achievement.