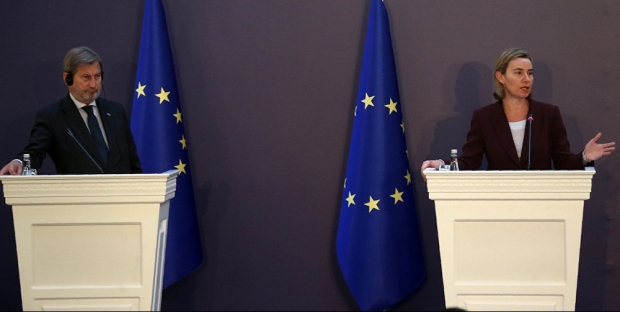 On Thursday, Istanbul 35th High Criminal Court reversed it’s earlier decision to release Mr. Kilic who has been in jail for nearly eight months on bogus charges of “terrorist organization membership and attempting to topple the Turkish government.”

Earlier this week, the Turkish authorities also detained eight members of TTB after they spoke against the military offensive against Kurdish enclave of Afrin in northern Syria.

Those are “the latest examples of the worrying developments undermining the rule of law and independence and impartiality of the judiciary in Turkey,” a statement by High Representative/Vice-President Federica Mogherini and Commissioner Johannes Hahn said.

In the statement, both leaders expressed concern over how court rulings are ignored by authorities.

“The non-implementation of judgments, including the recent Constitutional Court ruling and continued detention of two journalists in addition to the undermining of the rule of law, risks setting an unfortunate precedent as it cast serious doubts about the existence of effective legal remedy,” the statement added.

In early January, Turkey’s Constitutional Court ordered the release of two prominent journalists, Mehmet Altan and Sahin Alpay, but a local court in Istanbul refused to comply with the order.

It created a crisis in Turkey’s judicial system. A lower court’s refusal to comply with the top court ruling, which is ultimate and binding on all other courts, left legal experts and observers pondering its long-term ramifications for Turkey’s judiciary.

“The European Union expects the Turkish authorities to ensure that the Constitutional Court decision of 11 January 2018 is implemented and that the journalists are released without delay,” the two leaders said in a call to the Turkish government.

Concrete and lasting improvements in the area of the rule of law and fundamental freedoms, the statement concluded, remain essential to the prospects of E.U.-Turkey relations.

Turkey’s relations with E.U. has suffered significant setbacks over the past two years since the failed coup attempt.