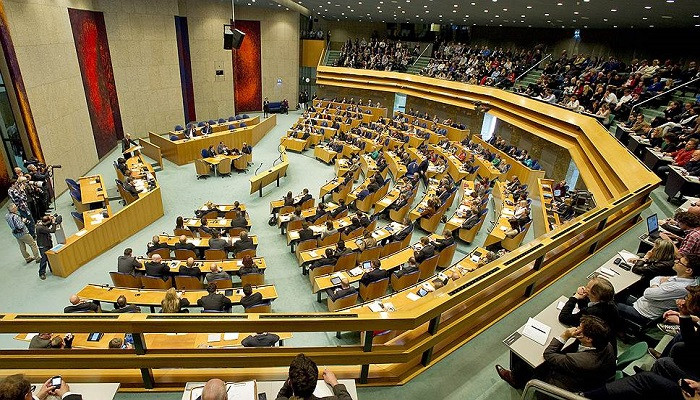 The Dutch Lower House’s recognition of 1915 events during the dying days of Ottoman Empire as a genocide against Armenian population has sparked a bitter diplomatic standoff with Turkey only after weeks of a recent row regarding mutual envoy pullouts.

Turkey has been incensed by the Dutch Parliament’s thrust into a contentions historical matter that bedeviled Ankara’s diplomatic ties with a number of countries in the past.

The Turkish Foreign Ministry summoned the Dutch charge d’affaires on Friday to condemn the vote. The Dutch lower house voted 142 to 3 in favor of the proposal “that parliament in no uncertain terms speak about the Armenian genocide.”

It also agreed to send a cabinet representative to Yerevan in April for the commemorations of the killings.

Acting Dutch Foreign Minister Sigrid Kaag tried to downplay the political consequences of the motion and said the government would restrain itself.

Turkey’s Foreign Minister Mevlut Cavusoglu unleashed a string of tirades against the Dutch government and said the populist vote was not binding in any way.

“I would think that the strained Turkey-Netherlands relation has made it easier for the Netherlands Parliament to become somewhat more outspoken on the Armenian question. Officially this is not a recognition but NL will be present at official commemorations without taking a further stance,” Adriaan Schout, Head of EU Affairs at the Netherlands Institute of International Relations (Clingendael), told Globe Post Turkey.

The definition of what happened in 1915, during dying days of the Ottoman Empire, has still been a matter of grave political and diplomatic controversy. To master the historical narrative, both Turkey and Armenia are jostling to persuade the international audience to accept their own accounts.

Armenian diaspora has for decades labored for the international recognition of killing of Armenians during the World War One as a genocide in a systematic campaign by the Ottoman forces. But Ankara stridently refuses such interpretation and argues that there were mutual killings in inter-communal violence, and a great number of Muslims suffered similar tragedies as well in Anatolia during the Great War. There was no systematic effort to extirpate Armenians, Turkey insists.

“The Dutch Lower House has urged the Dutch government to recognize the Armenian genocide, but the government is refusing to do so, continuing instead to speak about “the issue of the Armenian genocide”, while requesting that for this to be called “genocide”, historical research, U.N. statements as well as court rulings are required,” Pieter Cleppe, Head of Brussels Office at Open Europe, told Globe Post Turkey.

He noted that The Dutch government is sending a representative to Armenia to commemorate the tragic events, but according to Elsevier, it also doesn’t want to offend the Turkish government.

“Recently, there had been some rapprochement between the two NATO allies. Given the fact that the Dutch government does not follow the Parliament after all, I don’t expect the renewed tension to last,” Mr. Cleppe concluded.

Turkey’s relations with the Dutch government sank into new lows after The Hague announced withdrawal of its ambassador to Ankara who had already been barred from returning to his post following a row last year.

In March 2017, Turkish Family Affairs Minister Fatma Betul Sayar defied a Dutch ban and attempted to enter Rotterdam to hold a rally in a bid to advance the cause of President Recep Tayyip Erdogan for a referendum about presidential system.

The Dutch police barred the Turkish minister from holding the rally. It sparked a diplomatic spat, culminating in the Dutch decision to pull out its envoy to Turkey. In a statement earlier this month the  Dutch Foreign Ministry also said it will not allow the appointment of a new Turkish ambassador to the Netherlands.