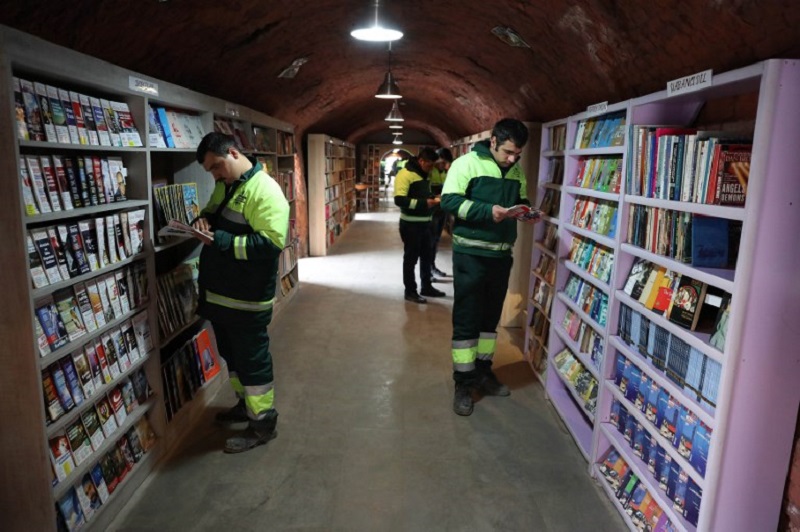 Many would prefer probably not to dwell on what becomes of books thrown into the rubbish bin when their onetime reader declutters their shelves.

In the Turkish capital Ankara, however, discarded books need not necessarily end up heading for papery oblivion.

Instead, a surprising life after death is now in store for them thanks to a rather unconventional library.

A group of the city’s rubbish collectors has set up the library boasting thousands of works that would otherwise have been swallowed up by landfill.

The books had been left out on residential streets together with other refuse for collection, sparking the idea to recycle them for a whole new readership.

Opened more than seven months ago by one district’s garbage collectors and their manager, the library is housed in a disused brick factory that was already serving as a base for the workers.

The once decaying plant, abandoned 20 years ago, is now a thriving space where staff can spend their break perusing the shelves stacked with some 4,750 books.

Originally intended just for the refuse workers and their families so they could borrow books for up to 15 days, it is now open to the public too, said Emirali Urtekin, the site’s manager, whose office is equipped with other rescued items like magazines and a typewriter.

There are another nearly 1,500 books yet to be placed on the shelves as more are rescued and now donated, he added.

No book goes to waste, with some of the nonusable books employed as shelves for the others.

The renovated building — where even copper pipes find a use as lights — is also home to a barber’s shop, cafeteria, social area and offices for administrative staff.

The books have so far been sorted into 17 categories, and counting, ranging from romance novels, economics textbooks, thrillers and children’s fiction.

It’s accessible 24 hours a day for the refuse workers and has its own librarian, paid by the municipality: 20-year-old Eray Yilmaz.

Up until now, Mr. Yilmaz said a total of 147 books had been borrowed from the library, whose members can potentially include the up to 700 rubbish collectors working for the Cankaya district.

According to the municipality, the new service is the only kind of library in the district open to the public.

“This is something that makes a person beyond happy. I take books to my mother too.”

Malik Ercan, one of several disabled staff members, said he took books home to his wife and child and that the library was drawing those outside of the city as well.

“Recently I showed my cousin around who had come from (the central Turkish province of) Sivas. They had heard about it in the news. They wanted to see it.

“More friends are calling and saying they want to see it after seeing the news, ‘let us see it… it’s very different’, they say,” added Mr. Ercan, who has been working for the municipality for two and a half years.

The library has received plenty of local and international attention, leading to the arrival of more books and not just from rubbish bins.

People from other Turkish cities now even pay the postal costs to send books to the library, Mr. Urtekin said, while refuse collectors continue to gather unwanted books on their daily rounds.

“We’re getting many visits from members of the public but also donations. They say: ‘This is such a good project, we want to support it as well’,” Mr. Urtekin said.

“We have given a new lease of life to those books that have been thrown away… and the books are available for free.”

Although there are no plans to expand the current space, the library has sparked further projects for discarded books.

The manager told AFP that later in the year they will create a mobile library and visit some Ankara schools every 15 days so more children have access.

It will serve schools without libraries or with a limited choice on their shelves.

Students will also benefit during the visits from musical performances by “Tin Group” — made up of 11 workers using broken rubbish containers and discarded metal objects.

The group started around the same time as the library opened, manager Urtekin said.

“We are happy,” the manager said. “It has given us a different identity.”