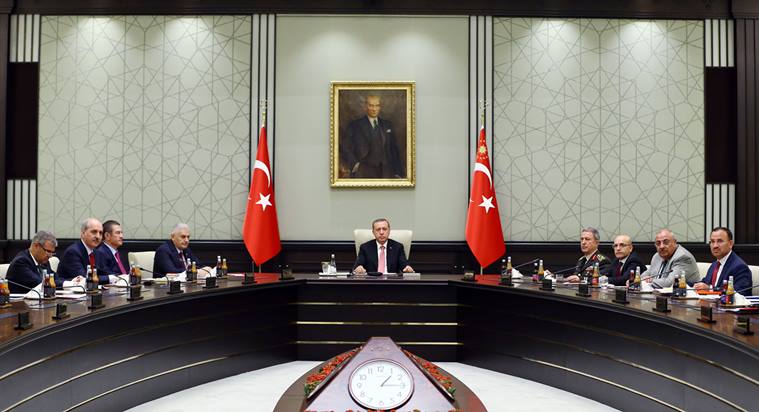 Turkey’s National Security Council vowed to take immediate steps to stop the formation of a “terror corridor and establishment of an army of terror” in northern Syria.

In a meeting that brought together government ministers and Turkish generals under the chairmanship of President Recep Tayyip Erdogan, the council also expressed dismay over the U.S. plan to build a new border force in Syria.

A statement released after the meeting underlined a number of efforts by Turkey to set back the initiative in northern Syria and to stop terror organizations from gathering strength.

It lamented the U.S. decision to proceed working with People’s Protection Units (YPG) despite its links to Kurdistan Workers’ Party (PKK).

The council expressed its demand that the U.S. should take back every weapon given to the YPG.

Regarding domestic politics, it offered an extension of the state of emergency.

Turkey has long pressed for an action against Kurdish militia in Afrin. It has been particularly enraged by a coalition plan to establish a 30,000-strong border force half of which will be comprised of veteran Kurdish fighters.

Read a comprehensive article on our sister website — The Defense Post. Turkey’s national security council says steps to be taken immediately to defeat threats from Syria