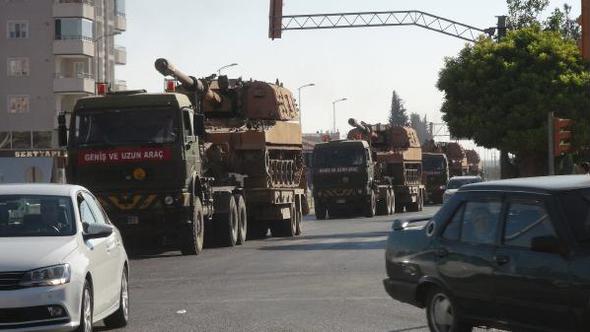 Turkey’s president has warned that the impending Turkish military operation against Kurdish militants in northern Syria would stir up unwanted losses of the U.S. military personnel who closely work with the “terrorists.”

As Ankara edges closer to a military endeavor that could seriously risk triggering an accidental encounter between the U.S. military members and the Turkish troops during the operation against Afrin, President Recep Tayyip Erdogan sharpened the tone of his criticism toward Turkey’s NATO ally.

“Remove your flags at terrorist bases in Syria, so we would not need to give them back to you [when we take over those bases]. Remove flags and insignia [of your personnel those who are] with YPG militants on the ground. So we would not need to bury them along with the terrorist dead,” President Erdogan said in threatening remarks during an address to his ruling Justice and Development Party (AKP) members on Monday. His speech was aired by pro-government A Haber TV channel.

Though the president criticized the U.S. in the past on many occasions, he never used such a threatening language against Turkey’s decades-old ally.

The Turkish authorities were enraged by a report appeared on The Defense Post. The U.S.-led coalition officials confirmed the formation of 30,000-strong force to protect Syria’s borders with Turkey and Iraq. Half of the new border units will be constituted by veteran fighters linked with Kurdish-led Syrian Democratic Forces (SDF).

Turkey sees U.S.-backed Kurdish militia as a terrorist organization due to its affiliation with the domestic insurgent group, Kurdistan Workers’ Party (PKK).

“What we are supposed to do is to drown this terror army before it comes into being,” the president said on Monday, signaling a looming operation to uproot the Kurdish militants from several towns in northern Syria.

“Our preparations have been completed. The operation is due to start any moment. After that, other regions will follow,” Bloomberg quoted the president as saying.

The Turkish military has now deployed hundreds of tanks near Syria border for a large-scale offensive against Afrin.

Turkey has genuine concerns that the recent plan could give a further edge to Syrian Kurds to push for their longstanding aspiration for a statelet, a self-sufficient armed force and a self-reliant political entity in northern Syria.

Ankara has been fighting against outlawed PKK in southeastern Turkey for nearly four decades. Another strong militia would stir additional challenges for Turkey’s border security.

Saleh Muslim, former co-chair of Kurdish political party, however, warned Turkey against an intrusion to Kurdish-held Afrin. He said that international coalition would not let Turkey plunge into Afrin.

An attack on Afrin, he emphasized, would be regarded as an attack on all Kurds, and would trigger an upheaval in Turkey, recalling the nation-wide violent protests by Kurds over Ankara’s position when Islamic State attacked Kobane in late 2014.

“The entire Kurdish people would erupt in revolt. That means total war,” he said, adding that it would bring the demise of the regime inside Turkey.

‘US Turns Page on Turkey’

Ankara has long pledged to take a military action against Syrian Kurds. But the latest salvos of threats appear to be more serious than ever. It also seems to bound to further strain ties with the U.S.

The State Department “has turned the page on Turkey and no longer believes it is a reliable U.S. partner,” Joshua Landis, Professor at Department of International and Area Studies at the University of Oklahoma, told The Globe Post Turkey.

According to him, Washington expects more anti-U.S. actions from Erdogan, and cannot reverse Erdogan’s course due to “the rising Islamism in Turkey, spreading dictatorship, and worsening anti-Israel rhetoric.”

President Donald Trump’s policy preferences led the U.S. to navigate its course in the region by engaging traditional allies, Saudi Arabia and Israel.

Mr. Landis said: “Trump has thrown in Washington’s future in the Middle East with its traditional allies, Israel and Saudi Arabia, and is moving to hurt Iran and Assad. To do this, Washington is promoting Kurdish nationalism in Syria and helping the YPG to arm and train.”

By keeping Damascus weak and divided, he underlined, the U.S. hopes to deny Iran and Russia the fruits of their victory.

Washington believes this pro-Kurdish policy will increase U.S. leverage in the region and roll back Iran, he added.

To him, Turkey is a collateral damage in this picture.

Washington recognizes that its pro-Kurdish policy is forcing Turkey into Russia’s arms but it is willing to risk this loss, he noted. “Washington is willing to hurt Turkey in order to help Israel and Saudi Arabia.”

Over the past few days, Turkey has repeatedly and increasingly shelled the positions of YPG militants in Afrin. For Mr. Landis, the Turkish leader would not go beyond that. Any invasion could bring YPG and PKK closer and would trigger unpleasant ramifications for Turkey.