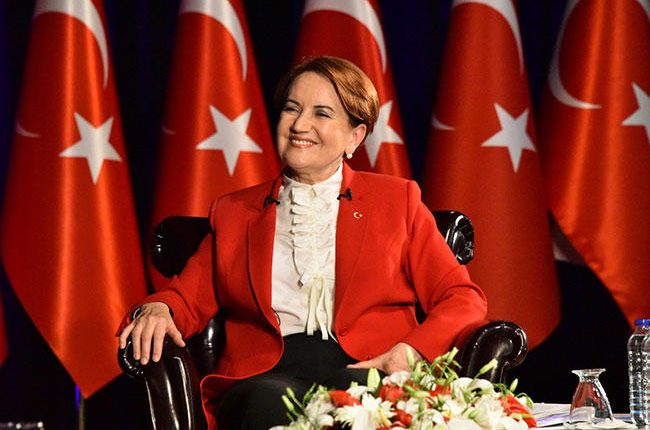 The upcoming June 24 elections will not only set Turkey’ first president in the new executive presidential system or determine the next government. It will also be a verdict about the future course of Turkey’s nationalist politics given that one nationalist party aligned with President Recep Tayyip Erdogan and his ruling party, while the other one has appeared as the president’s most ardent opponent.

At the center of schism is the emergence of Meral Aksener and her breakaway Good (IYI) Party as the new representative of traditional nationalist politics, while the meltdown of Nationalist Movement Party (MHP), which has dominated Turkey’s nationalist domain since 1969, seems to be accelerating.

What started as a jockeying for the control of party leadership and its policies in the late 2016 and early 2017, the split later devolved into a full-blown secession. Aksener’s challenge against current MHP Chairman Devlet Bahceli’s two-decade grip on the party opened divisions among scions and denizens of the party. To preserve his party leadership, Bahceli displayed a remarkable feat of a turnaround by abandoning his years-long fierce objection to a switch to the presidential system. He gave a full-throated support to Erdogan in his push for the executive presidency, and by doing so expedited the splintering of the party.

The party congress to elect a new chairman was blocked by an Ankara court last year. It enabled the embattled Bahceli to hold on to his post for the foreseeable future.

Not surprisingly, the path to the formation of Good Party was unwittingly laid out by the political machinations of Erdogan and Bahceli as legal drama only sharpened irreconcilable differences of the rival factions within the MHP. In October 2017, Aksener and her breakaway allies found a new nationalist party.

To take part in the first parliamentary elections, she immediately kickstarted building and completing the organizational structure of the nascent party. But President Erdogan’s unexpected call for snap elections on June 24 briefly left the party’s prospects to join elections in legal limbo over lack of clarity about meeting procedural requirements. According to Turkey’s election law, a party needs to prove that six months pass since it holds its first party congress, complete opening at least half of its provincial branches.

With main opposition Republican People’s Party (CHP)’s astute move to transfer 15 of its lawmakers to newly established Good Party to ensure its participation in the elections regardless of the political tug of war with the government through High Election Council (YSK) where its fate sealed after a tussle among board members.

Separately, Aksener officially became a candidate in the presidential contest earlier this month after securing 100,000 signatures. On Wednesday, she unveiled the main pillars of her party’s election manifesto for parliamentary elections while also set out major elements of her own program to follow if elected president.

Aksener’s opposition to President Erdogan rests on a central element. She has long accused Erdogan of building one-man rule and argued that the new presidential system virtually ends the basic pillars of an accountable democratic mode of governance.

Correspondingly, she vows to restore the parliamentary system as soon as she comes to power.

“We will take the initiative to write a new constitution that will pave way for the return to a strengthened parliamentary system that embraces all sections of the society,” she said.

The issue emerged as a common feature in programs of all opposition parties and their presidential candidates. Last year, this objection to the presidential system was the paramount source of the split within the MHP as Aksener and her lieutenants took the lead in defense of preserving the parliamentary system that had become the defining element of the republican democracy for much of the history of the Turkish Republic despite some intervals due to military coups.

Lowering the notoriously high election threshold from 10 percent to 5 percent finds its place as another policy objective in the to-do list. It is long floated by other opposition parties as well given that the punishing regulation leaves many parties outside Parliament although they garner millions of votes. Pro-Kurdish People’s Democracy Party (HDP), main opposition Republican People’s Party (CHP) and lately Nationalist Movement Party (MHP) broached the idea of reducing the threshold. The MHP, which previously had no qualms over the high bar that was set to keep the Kurdish party out of Parliament, moved to change its position after polls suggest that it falls short of that threshold for entering the legislative body.

Despite her promising posture last year during referendum campaign and offering a fresh voice to normally dull Turkish politics, polls do not augur well for Aksener’s prospects. Aksener is only able to capture only around 11 percent of the votes at the current moment. While the chance of a serious challenge to Erdogan appears to be implausible, her ascent is bound to redefine boundaries and the soul of Turkey’s nationalist politics. It is for this reason that Bahceli who seemed to be dreaded with the possibility of being dumped out of Parliament due to declining votes, sought a realignment with Erdogan’s AKP, to the dismay of loyal nationalists.

MHP is now acting as spokesman of Erdogan. For whatever goal Erdogan set for this alliance, infusing Islamist rhetoric with nationalist credo may well spur a backlash from pro-AKP Kurds who disdain MHP’s vulgar nationalism. To expand the limited reach of nationalist agenda, Aksener highlights the need to return to democracy, rule of law and accountability, elements that took a new form of life under the state of emergency and its corrosive impact on Turkey’s democracy.

Aksener who served interior minister in the late 1990s has strong credentials among religious and conservative segments of society over her unyielding opposition to the military interference in politics in 1997, a move that brought the end of a coalition government led by Islamist Welfare (Refah) Party. Her respect for religion and past record endears her to the religious voters. But there is no indication that whether that display of sympathy would translate into voting on election day given the existence of Islamist Felicity (Saadet) Party and its presidential candidate Temel Karamollaoglu as an alternative to the ruling Justice and Development Party (AKP) which share same ideological roots.

The alliance’s presence in Parliament would seriously dent AKP’s calculations for a majority in the 600-seat body. But polls show Erdogan’s AKP would finish the elections as the first party with a margin, however dim or small.

At the core of Aksener’s sharp criticism of the government is the pervasive culture of corruption.

“In the first six months of our rule, we will set up a legal framework that fights against corruption by issuing laws on transparency and political morality in the public service,” the Hurriyet daily quoted the nationalist leader as saying.

Her emphasis on increasing production in the national economy, fixing trade imbalance, dealing with a soaring inflation seems to reflect a strong desire. But her program does not offer certain prescriptions over how to tackle economic challenges given a struggling lira, a ballooning current account deficit and increasingly untenable debt of the corporate business against foreign banks.

But Aksener previously said she would respect the independence of Central Bank amid political controversy over Erdogan’s signals that he would have more say in the shaping of the monetary policy after the elections.

Last week, with a series of moves to increase interest rate and simplification of rate policy, the Central Bank somehow managed to arrest the freefall of the lira. Still, Erdogan’s tenuous relationship with the top body that regulates monetary policy in Turkey, his meager assurances of abiding global rules remain a source of concern for international markets.

Aksener’s economy team includes Durmus Yilmaz, former head of Central Bank. The veteran economist squarely ascribed the blame on Erdogan for the currency crisis and offered a bleak assessment of the management of Turkey’s economy under the AKP government.

The purge and crackdown following the failed coup in 2016 has created lasting social wounds. More than 150,000 people have been dismissed or sacked from public service while the same number of citizens are detained over coup-related and terrorism charges.

Aksener has emerged as one of the public defenders of Air Force Academy cadets who were recently sentenced to life in prison on the accusation of coup involvement. She blasted courts for failing to find out real perpetrators and holding young cadets and conscripted privates who only followed orders of their commanders during the coup day in 2016 summer.  She called for providing justice to cadets and soldiers.

She is not alone in this quest. CHP candidate Muharrem Ince also pledges to release convicted cadets and re-open closed military academies. Time will tell whether they would carry out their campaign promises. It all depends on the outcome of June 24 elections.

Kurdish Presidential Candidate Calls on PKK to Lay Down Arms