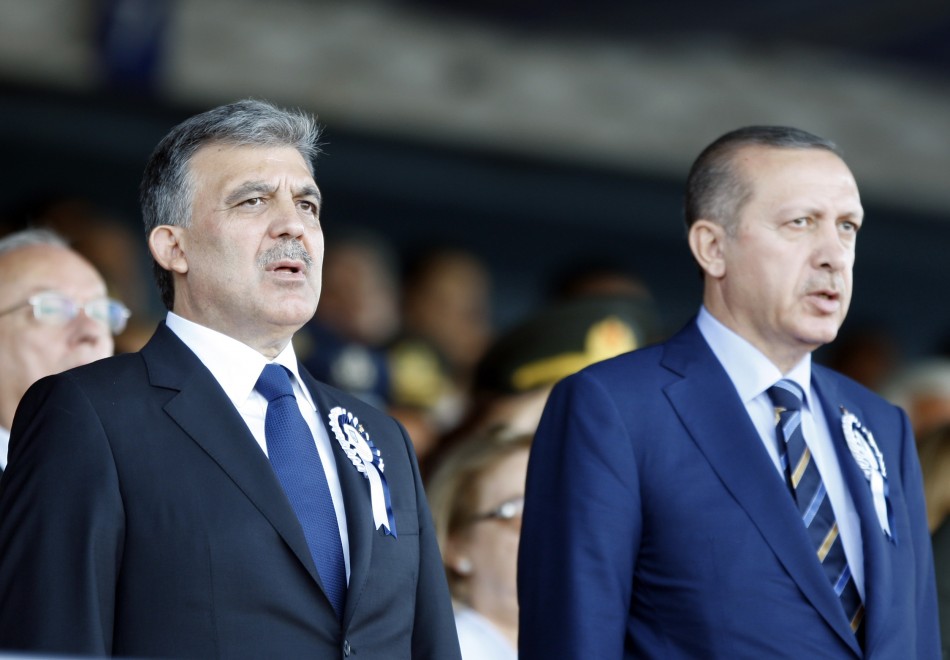 Rumors ran wild that former President Abdullah Gul, who was among the founding fathers of ruling Justice and Development Party (AKP), would consider the offer from opposition Islamist Felicity Party for running in the presidential elections. His potential candidacy has unsettled political calculations of the ruling AKP, with its media apparatchiks launching concerted efforts to disparage Erdogan’s comrade in the eyes of AKP constituency.

The idea of pitting Gul and Erdogan, AKP’s two towering figures, against each other appeared to be implausible and misplaced. Gul outright rejected running. With his refusal, the opposition was shorn of a serious prospect to defeat Erdogan under the stewardship of a figure as formidable as Gul.

According to Haberturk, President Erdogan sent military chief Gen. Hulusi Akar and his spokesman Ibrahim Kalin to persuade Gul to drop his possible candidacy. The newspaper later removed the story from its website.

The snap election move by the president set in motion of a series of events that would steer the course of Turkey’s elections in the weeks to come. The government’s banking on the premise of exclusion of new opposition Good Party fell apart after a shrewd move from main opposition Republican People’s Party (CHP) at the weekend.

On Saturday, the political fate of Good Party hung in the air. The vote in Turkey’s Supreme Election Board (YSK) on Saturday whether to allow the party to rune in June 24 election was a 5-5 tie and incomplete. An insider that night quickly informed CHP over the bickering and tussle among board members, prompting CHP to engineer a nimble move to thwart, in the words of former lawmaker Aykan Erdemir, “electoral machination of Erdogan.”

Fifteen lawmakers resigned from CHP and moved to Good Party, sealing its participation in the election regardless of the outcome of the dispute within YSK. And that plan worked. It expectedly produced a political storm. The ruling AKP reacted with incredulity, portraying the event as an electoral travesty, devoid of moral decency.

But Good Party Chairwoman Meral Aksener thinks differently. She exuded lavish praise on CHP leader Kemal Kilicdaroglu for his deft handling of the incident. According to observers, CHP pulled the levers once again, acquiring the moral high ground, elbowing aside the entrenched culture of the zero-sum political game with this altruistic act. It was CHP again in 2003 that untangled the locked doors of politics for Erdogan, enabling his ascension to premiership by allowing re-run of an election for a particular province, Siirt, after the annulment of the vote in the province.

President Erdogan, a veteran politician with an uncanny political acumen, appeared to be caught off guard. He was outmaneuvered and his facial expression, during a parliamentary session on Monday, displayed his seething anger.

During the same session, he looked at CHP side with as much contempt as he could generate. Erdogan and his government would not easily digest the opposition’s strategy even days after the move. After a brief quarrel between the main opposition leader and AKP lawmakers, the president left Parliament in rage. He unfurled rants and tantrums against the main opposition party.

Erdogan invoked the notorious Gunes Motel incident where 11 lawmakers switched their allegiance to rival political party in 1977 in return for getting ministerial posts. Their move triggered a government change and left an indelible mark in political memory. The incident secured its place in modern history as a moment of low-water mark of morality in politics.

With new lawmakers, Good Party is now able to form a group in Parliament and will enjoy state funding in its election campaign. The state-run television and news agency now have to air Aksener along with other political party leaders represented in Parliament.

Aksener is now considering to collect 100,000 signatures to officially declare her candidacy. Her thrust to politics has shaken her former Nationalist Movement Party (MHP) after the breakaway of hundreds of members in a move to join Good Party.

The political split between nationalist brethren left MHP still bleeding. Another lawmaker, Kadir Kocdemir, quit MHP on Thursday and joined the ranks of Good Party. The challenge from the splintered nationalists forced the MHP to crave for an electoral alliance with ruling AKP to avoid being dumped in elections. Current polls show MHP falling under 10 percent election threshold.

On Thursday, recently emboldened Felicity Party Chairman Temel Karamollaoglu visited CHP leader for possible alliance talks. Felicity Party is on the rise and threatens to steal votes from the ruling AKP given AKP voters’ growing disillusionment with their party leadership.

The disgruntled AKP supporters may switch their allegiance to Felicity Party, according to observers. As recently as last week, Karamollaoglu received a hero’s welcome in return from the central province of Konya, the cradle of political Islam in Turkey, to Ankara. The video showing hundreds of vehicles forming a convoy to welcome the party leader outside the city sent shudders among AKP leaders.

Amid a field of unpalatable choices, Turkey’s voters are left with a dearth of options to pick up a candidate appealing to many segments of society, including secular CHP base, Kurds, left, nationalists and some conservative voters who do not endorse Erdogan.

According to a shared conviction, Good Party leader Aksener’s chance to win Kurds’ votes is extremely low. Given her unswerving nationalist credo, there seems to be little space in her party program for Turkey’s disaffected Kurds. Her embrace of the military’s offensive in Afrin and her defense of the military option to resolve the decades-old Kurdish conflict would certainly not endear her to Kurds who desperately clamor for peace in the southeastern region.

The CHP’s candidate would not appeal to Islamist, nationalist or Kurdish voters. The party is still hankering for a name who could become a standard-bearer of its political message.

It would be safe to say that independent candidates Levent Gultekin and Tuna Beklevic have no chance to stand up to Erdogan.

Islamist Felicity Party’s efforts to convince Gul appeared to be the only realistic option against Erdogan. The mild-mannered and moderate Gul is the only name with political reach to Kurds, some of AKP’s core supporters, nationalist and other elements of the opposition.

Yet, both Good Party and CHP declared that they would proceed with their own candidates to assuage their demanding base.

Whether the opposition would close ranks around Gul as a second-round candidate remains to be seen. But for it to happen, Gul must first mull Felicity Party’s proposal to run against Erdogan.

On Thursday, Turkish media reported that he would not.