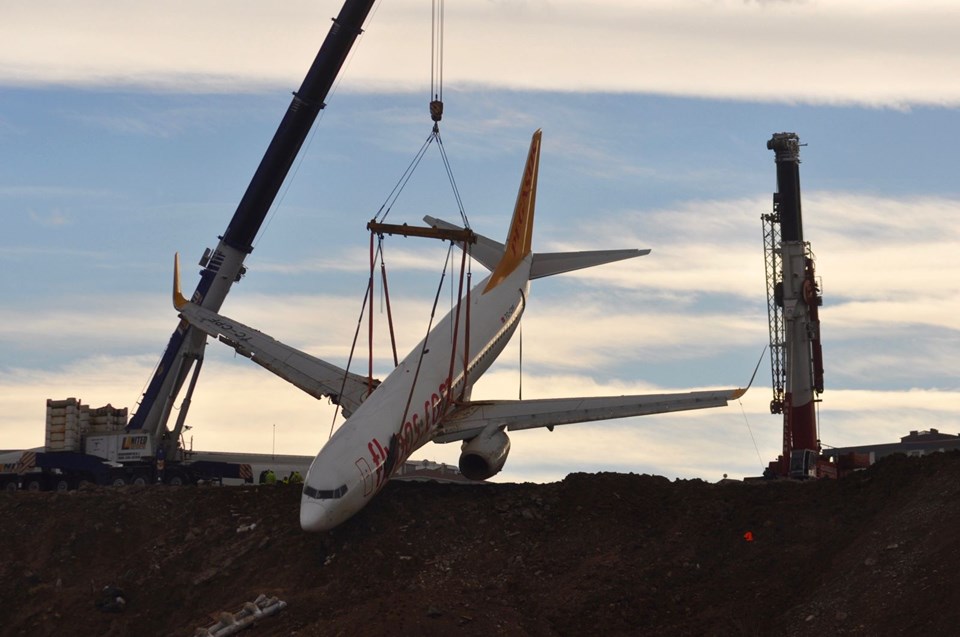 After a complex, arduous operation, Turkish officials successfully lifted a passenger plane, which skidded off the runway to be stranded on the edge of a cliff just a few meters away from the sea waters in northern Turkey.

The Pegasus Airlines Boeing 737-800 plane had landed normally at Trabzon airport late on Saturday on a flight from Ankara but then went off the runway just meters (feet) from the waters of the Black Sea with its wheels stuck in the mud.

Since then, it has remained on the steep slope that descends from the airport apron into the sea for four days, its nose pointing down and managing to defy gravity by being stuck in thick the mud.

The Turkish aviation authorities closed Trabzon airport from 0100 GMT to all air traffic so that the salvage operation can take place, with flights diverted to the nearby Ordu-Giresun airport, also on the Black Sea.

The authorities sent two cranes from Ankara and Samsun to carry out the operation, the Dogan news agency said.

Engineers began the operation by tying cables around the wing area of the plane in cradle fashion and also around the tail area. Both cranes will then work to lift the plane onto the runway.

Once it is back on the runway, it will be emptied of remaining fuel, taken to a hanger, where the baggage and personal possessions of the passengers will finally be removed.

All 162 passenger and six crew were safely evacuated but witnesses said at the time it was miracle there had been no casualties and the plane did not slip into the sea.

The pilot told prosecutors investigating the incident that the plane had undergone a sudden surge of power from one of the engines while taxiing on the runway.

The cause of the technical issue has yet to be made clear although images showed one of the engines had broken off and fallen into the sea.