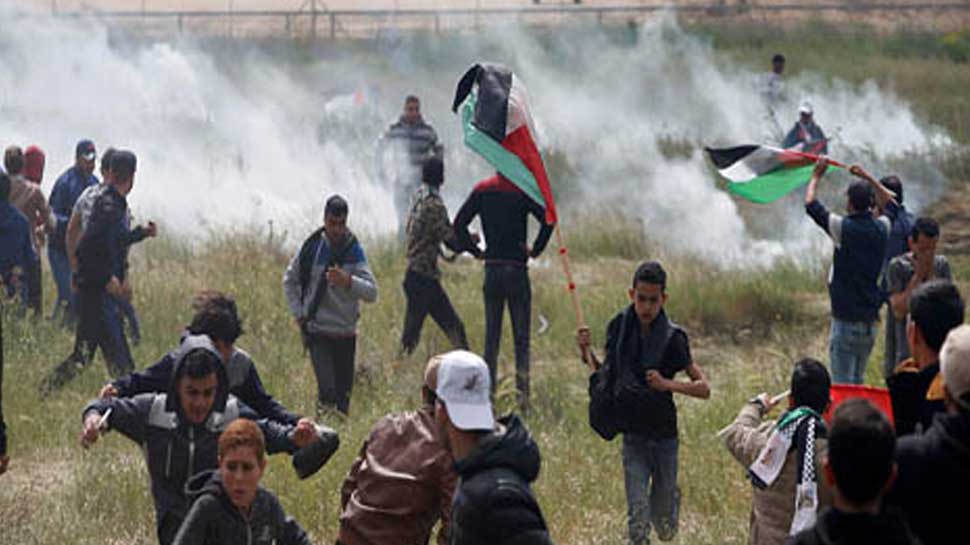 Leaders of Turkey and Israel engaged in mutual recriminations and traded barbs over Israel’s deadly response to protests in Gaza Strip after the Turkish president accused Tel Aviv of launching terrorism against innocent protesters.

Prime Minister Benjamin Netanyahu on Sunday lashed out at Turkey in response to its president’s claim that Israel mounted an “inhumane attack” on Palestinians during Friday’s mass protests on the border with Israel.

“The most moral army in the world will not accept moral preaching from someone who for years has been bombing a civilian population indiscriminately,” he said, in apparent reference to Ankara’s ongoing battle against the Kurds.

On Saturday, Recep Tayyip Erdogan said during a speech in Istanbul, “I strongly condemn the Israeli government over its inhumane attack.”

Also on Saturday, the speaker of Iran’s Parliament lashed out at what he called the “illegitimate and usurping Zionist regime” for its part in the clashes on the border between Gaza and Israel on Friday.

Speaking as the chairman of the Tehran-based Parliamentary Union of the OIC (Organization of Islamic Cooperation) member states, Ali Larijani charged that Israel was trying to destabilize the region together with US President Donald J. Trump, who in December recognized Jerusalem as the capital of Israel and announced the relocation of the U.S. Embassy there from Tel Aviv — a move due to take place in May.

“The Zionists’ policy of creating tensions and crises along with Trump’s move in announcing the move of [the] U.S. embassy to al-Quds [Jerusalem] are making up a dangerous plot targeting the stability and security of the region,” Mr. Larijani said, according to the Iranian Mehr news agency.

“The only language that the terrorists ruling in Tel Aviv can understand is the language of force, and resistance is [the] only solution to counter the ambitious ends of the Zionist regime,” he said.

The Israel Defense Forces said Saturday that at least 10 of those killed — the Gazans reported a death toll of 15 — were members of Palestinian terror groups including Hamas.

On Saturday, the U.S. blocked a draft U.N. Security Council statement urging restraint and calling for an investigation of the clashes on the Gaza-Israel border, diplomats said. Kuwait, which represents Arab countries on the council, had presented the proposed statement, which called for an “independent and transparent investigation” of the violence.

The Palestinian Authority blamed the U.S. and Britain for obstructing the Palestinian and Arab effort to persuade the Security Council to issue a resolution blasting Israel for the 15 Palestinian fatalities.

Yusef al Mahmoud, the spokesperson for the PA government in Ramallah, said Saturday that Washington and London’s opposition to a resolution condemning Israel “turns them into accomplices in the horrific massacre committed by the Israeli occupation army against our defenseless people.”

He said the IDF used “pinpoint fire” wherever there were attempts to breach or damage the security fence. “All the fatalities were aged 18-30, several of the fatalities were known to us, and at least two of them were members of Hamas commando forces,” he said in a late afternoon statement.

As of Saturday evening, Hamas itself acknowledged that five of the dead in the so-called “March of Return” were its own gunmen.

At previous peace talks, the Palestinians have always demanded, along with sovereignty in the West Bank, Gaza, East Jerusalem and the Old City, a “right of return” to Israel for Palestinian refugees who left or were forced out of Israel when it was established. The Palestinians demand this right not only for those of the hundreds of thousands of refugees who are still alive — a figure estimated in the low tens of thousands — but also for their descendants, who number in the millions.

No Israeli government would ever be likely to accept this demand since it would spell the end of Israel as a Jewish-majority state. Israel’s position has generally been that Palestinian refugees and their descendants would become citizens of a Palestinian state at the culmination of the peace process, just as Jews who fled or were forced out of Middle Eastern countries by hostile governments became citizens of Israel.