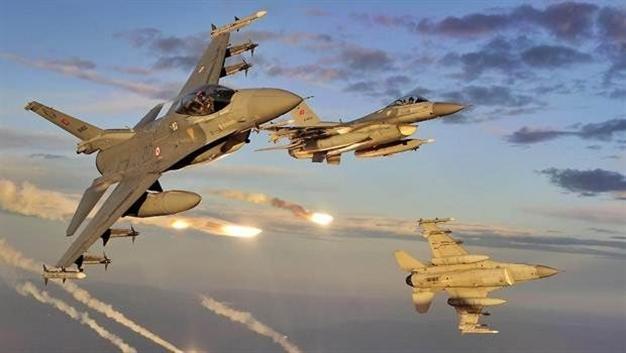 The Turkish military has officially launched the “Operation Olive Branch” against Kurdish enclave of Afrin in northern Syria on Saturday, at 5:00 p.m. local time, with Turkish fighter jets pounding militia positions in the city.

After weeks of diplomatic wrangling and saber-rattling, Turkey moved ahead with its long-anticipated endeavor to uproot the Kurdish militia from the northwestern Syrian town of Afrin near the Turkish border. The operation became possible after Russia consented to withdraw its troops to avoid potential casualties. Russia controls the airspace over Afrin.

The military announced the start of the offensive with a statement on Saturday hours after President Recep Tayyip Erdogan said the operation has de facto begun. The military said 108 targets were hit as  F-16s took off from Diyarbakir Air Base and other bases and joined the air campaign that lasted for hours.

A column of Turkish tanks crossed the Syrian border and heading to Afrin, NTV reported.

President Erdogan said Manbij will be the next target.

President Erdoğan: “Just like we drove a dagger into the terror corridor with the operation we carried out on the line between Jarabulus and Al-Bab, now we will gradually destroy this corridor, starting from the West. The Afrin Operation has begun in the field. Manbij is next.” pic.twitter.com/KFRSKGVPHJ

Locals and reporters shared photos from Afrin following the airstrikes.

Local residents reported in Turkey’s border town of Kilis that a mortar shell hit a residential apartment toward midnight. The governor refused reports that a shell from the Syrian side of the border landed in downtown.

Turkish military chief Akar told media that there are casualties on the Turkish side as well.

The impending operation was long in the making but faced delays given vexing geopolitical problems that pit regional and great powers against each other in a condensed theater.

The flurry of events that led up to the Turkish offensive on Saturday has reached a boiling point last week after the announcement of coalition plan to build a new 30,000-strong border force in northern Syria near the Turkish border.

Turkey’s long-simmering resentment toward the U.S. alliance with the Syrian Kurdish militia has reached a febrile stage after plans of integrating Kurdish-dominated Syrian Democratic Forces (SDF) into the scheme. Ankara’s reaction was furious and swift.

Later Pentagon backtracked on the plan and tried to alleviate fears of Turkey by clarifying the scope and the mission of new force. It, the U.S. authorities said, focused on tackling the threat of Islamic State.

Turkey had ramped its diplomatic efforts to sway the U.S. decision and to secure approval from great powers, Russia and the U.S., for the operation.

The U.S. last week urged its NATO ally not to take any action in northern Syria, warning the risk of wider regional destabilization.

On Thursday, Gen. Akar and Turkey’s spy chief Hakan Fidan were in Moscow for talks to secure Russian consent for the Turkish operation. The talks also revolved around the potential withdrawal of Russian military personnel from Afrin to be relocated to another location.

Before the operation, Turkish military chief Gen. Hulusi Akar called his Russian and the U.S. counterparts to inform them about the offensive.

Turkish Foreign Minister Mevlut Cavusoglu held a phone conversation with his U.S. counterpart Rex Tillerson to inform him about the Turkish offensive.

Turkish air force planes is now bombing the city of Afrin, and the two districts of Shirwa, Shira, the areas of Gendarese and Rajo. pic.twitter.com/2TKE9dvHDq

“We warn the Turkish leadership that in the event of initiating hostilities in the area of Afrin, this will be considered an act of aggression by the Turkish army on the sovereignty of the Syrian Arab Republic’s territories… ” Deputy Foreign Minister Faisal Mekdad said on Thursday.

But Turkey’s use of air force has not met with any resistance or fire. The Turkish military said all of 72 aircraft, which took part in the air campaign, returned to their bases safely.

German Foreign Ministry Deputy Spokesperson Rainer Breul urged caution for Turkey as Ankara mulls a ground offensive against the Kurdish enclave. Speaking to reporters in Berlin, the German official said Germany understood legitimate concerns of Turkey to protect its borders with Syria, and its national security interests along the border.

On Friday, Russia was reluctant to pull out its troops and Foreign Minister Sergei Lavrov rejected media reports suggesting withdrawal of its forces.

“The command of the Russian troops in Syria took measures to ensure the safety of Russian servicemen who were in the canton of Afrin, where the Turkish armed forces started a “special operation” against the Kurdish formations,” the Russian Defense Ministry said, confirming the withdrawal of its troops.

“To prevent possible provocations, to exclude the threat to the lives and health of Russian servicemen, the operational group of the Center for the reconciliation of warring parties and military police in the Afrin area was relocated to the Tell-Adjar area of the Tell Rifat deconfliction zone,” it said.

Prime Minister Binali Yildirim said on late Saturday that ground forces will plunge into the enclave on Sunday. But even before Sunday, Turkish tanks reportedly crossed the border.

Turkey has amassed troops, tanks and artillery units across the border.  Additionally, it has moved 20 buses of rebel fighters to the border areas for a possible deployment on the ground offensive, the Turkish media reported.

Al Jazeera reported on Saturday that as many as 15,000 rebel fighters aligned with Turkey have been mobilized in the east of Afrin.