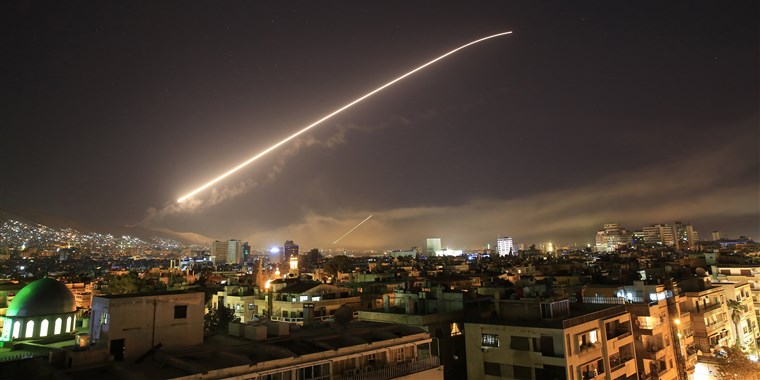 Turkey welcomed the coordinated strikes by the United States, the U.K. and France against the Bashar al-Assad regime as “appropriate response” in retaliation for a suspected chemical attack that killed dozens of civilians last week.

In his initial reaction, President Recep Tayyip Erdogan said he finds the operation justified and well-placed. ”

“The regime now saw that its inhumane, rule-defying attacks against the opposition that escalated recently would not away unpunished,” the president said.

Last week, U.S. President Donald J. Trump was hinting looming strikes against the Assad regime for the chemical weapon attack that killed scores of people in the Syrian city of Douma.

“We welcome this operation which has eased humanity’s conscience in the face of the attack in Douma, largely suspected to have been carried out by the regime,” said the Turkish foreign ministry in a statement on Monday.

Ankara portrayed the regime’s targeting of civilians with weapons of mass destruction as “crimes against humanity.”

“The Syrian regime, which has been tyrannizing its own people for more than seven years, be it with conventional or chemical weapons, has a proven track record of crimes against humanity and war crimes,” the ministry said.

“We believe that the sensitivity shown toward the chemical attack in Syria would be displayed for the hundreds of thousands of innocent Syrians killed by conventional weapons by the regime,” said the Turkish leader. He has been a vocal critic of the Assad regime.

Turkey has feverishly sought the ouster of the Assad regime since the outbreak of the conflict seven years ago.

Foreign Minister Mevlut Cavusoglu said that the operation should have taken place long ago.

“Despite the fact that Russia and Iran all guarantors of all treaties, this regime has killed tens of thousands of people in Eastern Ghouta,” he said. “This regime must not remain in control of Syria,” he added, warning that otherwise “things will get worse.”

The only critical voice came main opposition leader who registered his dissent from a broader perspective regarding the protracted conflict. Republican People’s Party (CHP) Chairman Kemal Kilicdaroglu denounced the chemical weapons attack but expressed discontent over the involvement of outside powers in a regional conflict.

After Trump’s vehement criticism of the Syrian regime last week, with the U.S. president calling Assad an “animal,” the expectation for imminent U.S. strikes was high. The U.S. administration was in constant contact with two allies for articulating a coordinated military response to punish the regime for the brazen attack that killed more than 40 people.

Mahir Unal, a spokesman for AKP government, said prior information before the attack was shared with the Turkish government.

As other officials in Ankara, he also savored the moment but urged for a more consistent effort to end the war and oust the Assad regime from power.

“We see and evaluate this attack as a sanction against the use of chemical weapons. We see it as a serious warning for preventing the chemical weapons used by Assad against his own people,” he added.

Ankara has long clamored for a more robust Western action against Damascus. None of its proposals, either for direct removal of the Assad regime or a limited intervention for a safe zone in northern Syria to accommodate refugees, has found a receptive audience in the West.

The U.S., both during Obama administration or current Trump presidency, is wary of a creeping mission and a risky entanglement in another Middle East conflict. The European powers are also reluctant for such an endeavor, citing costs and the ever-present of a risk of a greater military conflagration that would involve Russia and Iran.