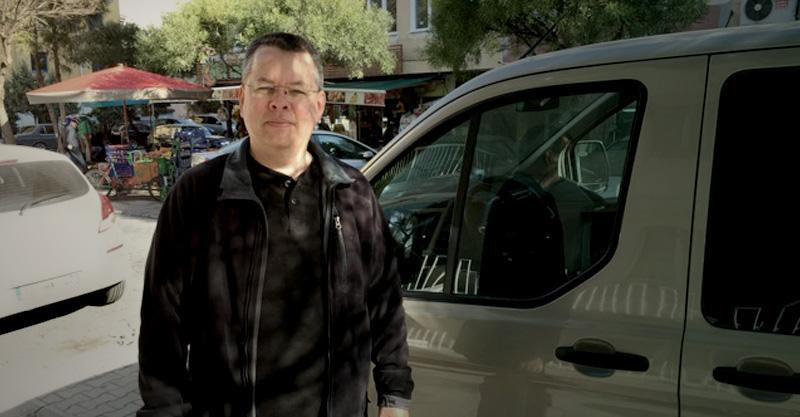 It took more than one and a half years for an American Christian pastor to appear at a court hearing to face a number of charges ranging from “armed terrorist organization membership, coup involvement and espionage against the Turkish state.”

Andrew Brunson, a Presbyterian pastor from North Carolina who lived in Izmir for more than two decades, rejected all charges on Monday. His case became a flashpoint in turbulent relations between Turkey and the U.S., and subsequent pleas from President Donald J. Trump and other senior U.S. senators went so far unheeded.

In a reflection of the importance the U.S. ascribed to the case, Sam Brownback, the U.S. ambassador at large for religious freedoms, and Senator Thom Tillis were present at the court to follow the trial.

“I want the whole truth to be revealed. I reject all the accusations in the indictment. I haven’t been involved in any illegal activity,” Brunson told a packed court.

“I haven’t done anything against Turkey. On the contrary, I love Turkey, I have been praying for Turkey for 25 years,” Brunson added, according to AFP.

The pastor first moved to Izmir in 1993 and had been running a church since 2010 until his arrest in the aftermath of the failed coup.

The prosecutor’s office previously accused Brunson of being a member of Gulen Movement, a Muslim faith-based civil society organization. Brunson rejected any link to Gulen Movement. “That would be an insult to my religion. I am a Christian. I would not join an Islamic Movement.”

In early March, prosecutors demanded life sentence for him over coup-related charges.

Turkey’s authorities hold U.S.-based cleric Fethullah Gulen‘s organization as responsible for the botched coup in 2016 and pressure Washington to extradite Gulen, to no avail.

In an unwitting admission of pursuing a “hostage policy” against its ally, President Recep Tayyip Erdogan even proposed the release of Pastor Brunson in exchange for cleric Gulen. But that offer went nowhere.