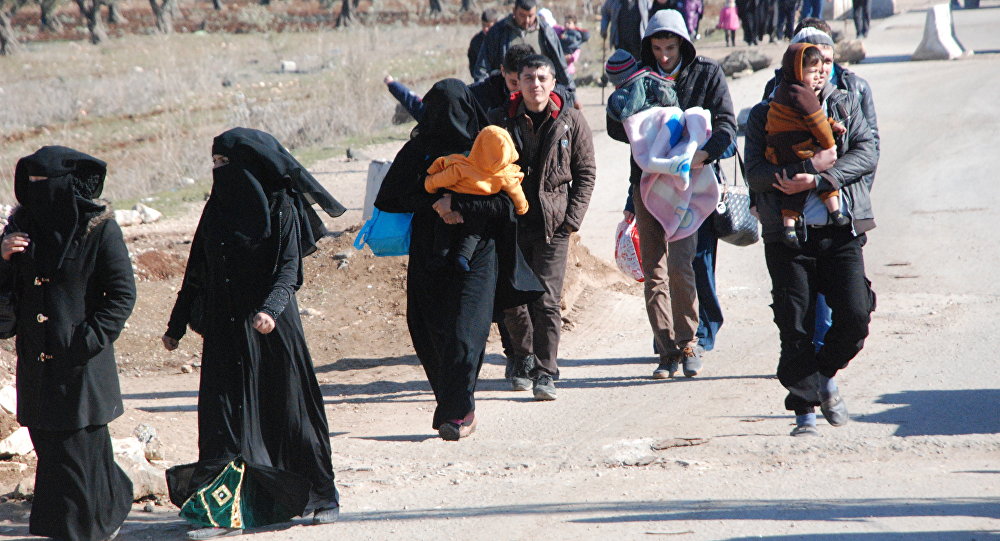 The ongoing Turkish offensive against Kurdish enclave of Afrin has displaced thousands of civilians and refugees in northern Syria, pushing them to find new safe heavens in a conflict zone.

Trapped in a basement for three days with his family as Turkey shelled their northern Syrian hometown, Merhi Hassan fled just in time to escape bombardment that almost killed his elderly father.

The family piled into a rusted pickup truck with whatever they could scavenge from their demolished home and drove north to Afrin, the city at the heart of the Kurdish-held enclave by the same name.

Blinking tears out of his eyes, Hassan clambered out of the small truck in Afrin after the drive from his native Jandairis, a border town.

“The bombardment wouldn’t let us sleep. We spent three nights in the basement,” said Hassan, a red-and-white scarf wrapped around his head.

The man in his late forties had left the underground shelter to try to convince his elderly father to flee the town with his family.

“He wouldn’t accept,” Hassan said. Until a new round of Turkish bombing hit their neighborhood and “I had to pull him out from under (shattered) glass.”

Turkey and allied Syrian rebels have since Saturday been waging an offensive against the Kurdish People’s Protection Units (YPG), which controls the Afrin region.

As part of the push, Ankara has been pounding the canton’s border towns with artillery fire, and thousands of people have reportedly fled, many of them to Afrin city.

“The shells hit every neighborhood, they hit the generators and the bakery. Nothing is left,” said Hassan.

According to the United Nations, more than 300,000 people live in the Afrin canton, including more than 120,000 who have already been displaced at least once.

Those arriving in the city from battered border regions have struggled to find adequate shelter and have settled into squalid conditions.

In one half-finished building, women and children sat cross-legged on mattresses on the earth floor, surrounded by cinderblocks, shoes and camping stoves.

New families were still arriving outside, some pulling kitchen supplies, food and bags of clothes from pickup trucks.

But Zarifa Hussein and her children had no time to pack belongings.

“We didn’t bring anything with us. We fled our house barefoot and spent the night in a bomb shelter,” said Hussein, who was dressed in multiple layers.

The pregnant woman said a cinderblock even crashed on her back as she ran out of her home.

“In the morning, we went to get our things and found the house demolished,” she told AFP.

Another woman came down from the pickup truck angrily waving a pointed sliver of metal in the air.

“As we fled Jandairis, this flew behind us,” she said, her hair wrapped in a green and brown scarf.

“May it strike them (attackers) right between the eyes.”

In Afrin’s main hospital, Arze Sido sat nervously by a hospital bed, where her adult son lay motionless and hooked up to an intravenous drip.

Early this week, Sido and her wounded son, two young daughters and mother-in-law escaped the border town of Midan Akbas and headed southeast to stay with relatives in Afrin.

“I was so scared for my daughters,” she told AFP.

“My son wanted to grab bread but I told him, come, there’s shelling,” said Sido, wearing a pale floral headscarf.

“As he was getting it, the Turkish army shelled us. We had to pull him out and bring him to the hospital. He’s been here for more than three days now.”

Turkey has pressed its offensive despite global calls for de-escalation.

Jumaa Hassan Hassoun, a 56-year-old displaced from Jandairis, said it was time world powers stepped in.

“I left with my children: seven daughters, two boys, and my wife,” said the Jandairis native.

“We want our voices to reach the whole world — save us from this!” he cried.