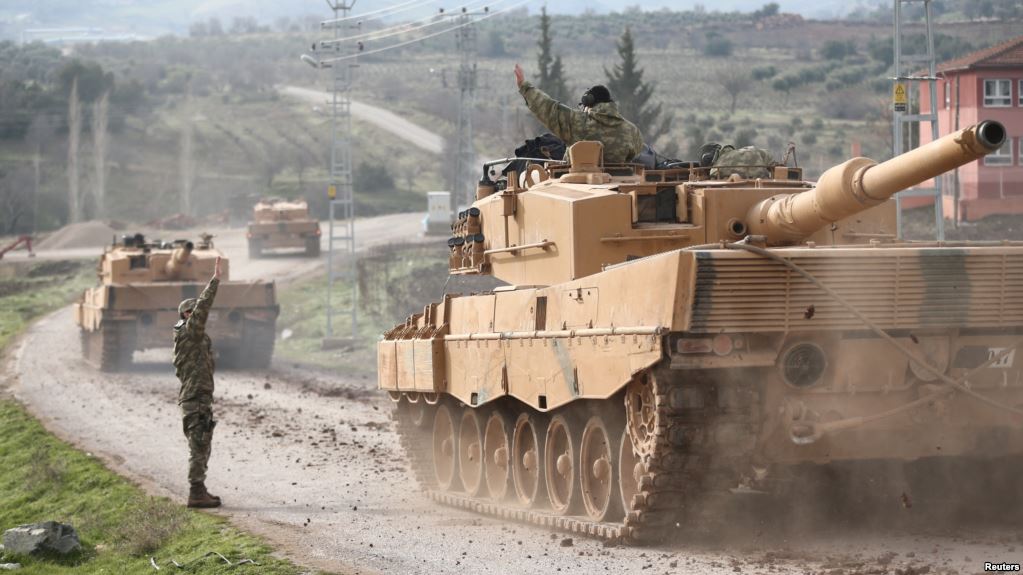 Turkey’s president vowed that Ankara would expand the military offensive against Afrin to other northern Syrian cities as well in an effort to eliminate the presence of a Kurdish militia whose not-too-subtle links to a domestic terror group unequivocally ignited the Turkish military endeavor from the beginning.

“We will continue our fight until there is no terrorist on our border leading to Iraq,” President Recep Tayyip Erdogan said in Ankara on Thursday, elbowing aside the U.S. warnings to “keep the military offensive limited in scope and duration.”

But his threat to expand the offensive to Manbij would set the two NATO allies on a collision course given the presence of U.S. forces in the city. On Wednesday, U.S. President Donald J. Trump, during a phone call with the Turkish leader, called on “Turkey to exercise caution and to avoid any actions that might risk conflict between Turkish and American forces.”

“He urged Turkey to deescalate, limit its actions, and avoid civilian casualties and increases to displaced persons and refugees,” a White House statement quoted Mr. Trump as saying.

The Turkish side later disputed the authenticity of the content of the White House statement.

Manbij is home to U.S.-allied  Syrian Democratic Forces (SDF), a coalition cobbled together by a number of Kurdish and Arab fighting groups but mostly dominated by Kurdish militia People’s Protection Units (YPG).

Ankara regards YPG as a “terrorist” organization due to its links to Kurdistan Workers’ Party (PKK), a formidable guerrilla group that waged a four-decade insurgency to carve up an autonomous region in southeastern Turkey. But such charges are not without merit or totally groundless since YPG itself never shies away from displaying allegiance to jailed PKK leader Abdullah Ocalan whose pictures decorate YPG flags.

The U.S. alliance with YPG-led SDF has, therefore, remained a sore point in turbulent relations between Washington and Ankara. Turkey has never relented on its demand from the U.S. to cease its ties with the Kurdish militia.

Speaking on Friday, the president said the operation would last until reaching Turkey’s goals in Afrin, which lies along the Turkish border.

“Afterwards, we will, as promised, clean up Manbij of terrorists.”

But what is the exact scope of Turkey’s military mission remains to be a riddle despite public remarks from senior Turkish politicians? While Ankara set the takeover of Afrin from YPG militants as the fundamental objective of its military incursion, what will do with the town and how long it will stay there generated a lasting controversy both at home and abroad.

President Erdogan and Foreign Minister Mevlut Cavusoglu signaled a potential swap with Damascus. The Turkish leaders hinted that Turkey would return the region to its “original owners,” suggesting that Ankara might have sealed a tacit agreement with the Bashar al-Assad regime to hand over the town to Damascus.