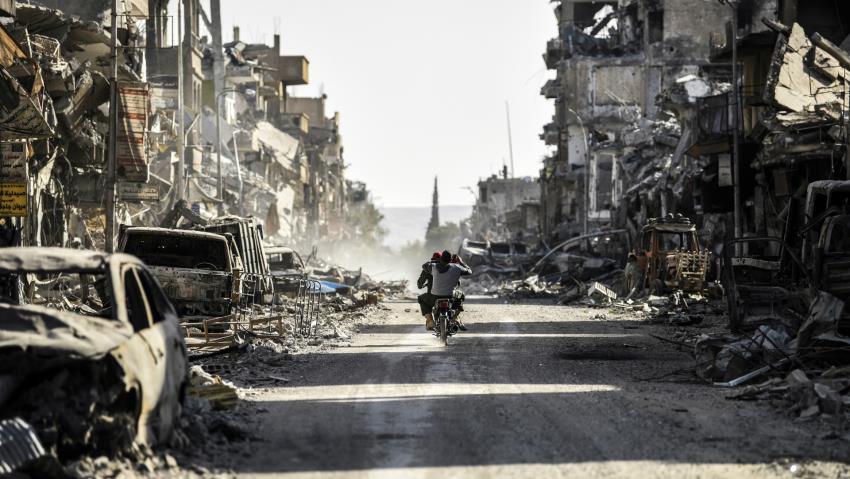 While the risk of an unwitting confrontation between two NATO forces over Kurdish-held city of Manbij in northern Syria has not completely evanesced, a senior Pentagon official has said he sees no indication that Turkish forces are moving toward the city, which is home to U.S. special forces.

The dreadful scenario of an undesired showdown looms large over the thinking of statesmen on both sides of the Atlantic, with officials scrambling to soothe ever-present concerns expressed in media and any platform available.

As recently as Sunday, Turkey’s Deputy Prime Minister Bekir Bozdag again dangled the prospect of a clash if the U.S. forces remain present among Kurdish militia, which Ankara views as its nemesis due to its ties to Kurdistan Workers’ Party (PKK).

The Turkish military offensive against Kurdish enclave of Afrin has only aggravated the delicate situation in northern Syria, created new cracks within the fraying relationship between Turkey and the U.S.

But as Turkish media abuzz with Ankara’s threats to press forward toward Manbij after Afrin, a senior Pentagon official stamped out the talk of a clash between two allies as misplaced and overblown.

“Our cooperation and mil[itary]-to-mil[itary] communication with NATO allies is excellent. I don’t expect that will change at all,” Mark Swayne, Acting Deputy Assistant Secretary for Stability and Humanitarian Affairs at Department of Defense, said on Monday.

“Mil to mil communication will continue. And I have no indication that they [Turkey] are going to move into Manbij,” Mr. Swayne told the audience at an event held by Center of Strategic & International Studies (CSIS) in Washington, D.C.

Karen Decker, Director, Syria Transition and Response Team, Bureau of Near Eastern Affairs, U.S. Department of State, reflected on the recent state of discord over Manbij from a different angle.

“The question is not about Manbij as it is about commentary on the state of Turkish media, which is not a helpful interlocutor in terms of helping the U.S. and Turkey manage its relationship,” she said. “And the Turkish press has served to whip up sentiment,” Ms. Decker added, referring to the deliberate effort by the pro-government media in Turkey to generate anti-American frenzy.

On the speculation of brewing crisis that might some point pave the way for an accidental clash, she offered caution.

“But I think there is a big, huge difference between the popularity of Afrin and the idea that Turkey and the U.S. will be shooting at each other,” she said, depicting media reports as overwrought.

The defeat of ISIS does not spell the end of the fight in northern Syria. It is only one part of a long fight against extremism or the destabilizing forces that swept through Syrian cities, including Raqqa.

Stabilizing Raqqa, rebuilding a ravaged city stands out as the most daunting challenge for the international community and neighboring countries. And in the panel briefing by CSIS, a group of senior U.S. officials overseeing the U.S.-led efforts to stabilize Raqqa shared their firsthand account of what they saw during a visit to the city, once the capital of the self-proclaimed Islamic Caliphate.

Robert Jenkins from U.S. Agency for International Development eyewitnessed the colossal damage inflicted on the city’s urban landscape during the fierce monthslong fighting between ISIS fighters and coalition forces.

Despite the destruction, he also saw a lifted spirit and animated desire from people to rebuild their lives from scratch. People are opening their shops and the life, albeit at a small pace, gradually returns to normalcy.

One point was largely gone unnoticed by media, he underlined, was the fact that the U.S. has spent almost $7.7 billion since the start of the conflict. He said the U.S. is helping five million Syrians, four millions of them inside Syria, every month.