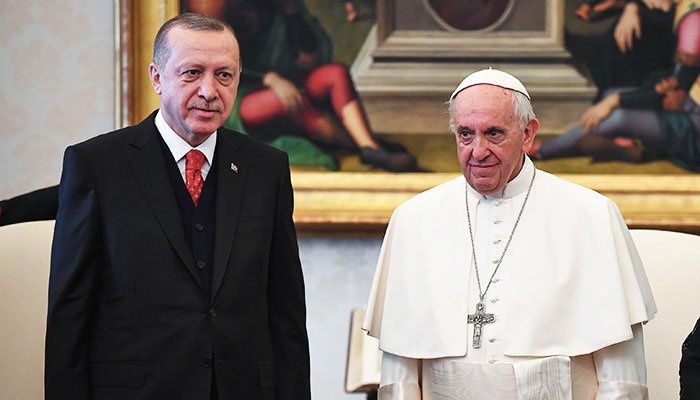 Turkish President Recep Tayyip Erdogan met with Pope Francis on Monday to discuss how to resolve disputes that afflicted relations between the Muslim world and Christendom, and international issues at the center of global affairs.

President Erdogan’s meeting came at a time of a heightened tension between the West and Turkey over the latter’s military foray into northern Syria against the Western-allied Kurdish militia. To avoid protests and other disturbances during the Turkish leader’s visit, Italian police imposed a protest ban in downtown Rome.

For the first visit by a Turkish leader for 59 years, the Italian authorities have imposed a 24-hour ban on demonstrations which covers President Erdogan’s arrival from late Sunday to his departure on Monday evening.

Though the pope’s facial expression and outlook cast an anxious figure, he gave the Turkish leader a medallion embossed with an angel strangling a “demon of war” — a symbol of peace and justice.

Mr. Erdogan’s convoy arrived at a deserted Saint Peter’s Square, which was under heavy security as a total of 3,500 police have been deployed for the visit.

Nevertheless, a small sit-in protest by some 30 people, organized by a Kurdish association in Italy, took place on Monday not far from the Vatican.

Turkey on Jan. 20 launched its “Olive Branch” operation against Syrian Kurdish People´s Protection Units (YPG) militia which Ankara sees as a terror group and a threat to Turkish territory.

The Turkish army and allied Ankara-backed Syrian rebel forces are seeking to oust the YPG from its western border stronghold of Afrin but the operation has faced fierce resistance.

“In Afrin, a new crime against humanity is underway,” the Kurdish association said.

The fighters and civilians killed in the Turkish assault on the region included female combatant Barin Kobani whose mutilated body appeared in a shocking video, prompting accusations by her family and Kurdish officials that she was “defiled” by Turkish-backed rebels.

The YPG, while considered a “terrorist” group by Ankara, is allied to the United States in its battle against Islamic State group militants.

The pope who has railed against the horrors of war and weapons of mass destruction gave President Erdogan the gift of a medallion with “an angel of peace strangling the demon of war.”

“It’s a symbol of a world based on peace and justice,” the pontiff said, according to two journalists present during the meeting.

Mr. Erdogan for his part was expected to thank the pope for opposing the decision by U.S. President Donald Trump to recognize Jerusalem as the capital of Israel.

“We are both in favor of the status quo and we have the will to protect it,” he said in an interview published ON Sunday.

The Turkish leader led an Islamic Summit to denounce the U.S. decision and call for recognition of East Jerusalem as Palestine’s occupied capital.

The Turkish president’s flying visit to Italy was also set to include a meeting with his Italian counterpart Sergio Mattarella and Prime Minister Paolo Gentiloni, with illegal immigration, defense cooperation and EU membership likely on the agenda.

While in Istanbul, the pope acknowledged that current global crises had made Muslims vulnerable to being stigmatized.

Francis denounced those who said “all Muslims are terrorists.”

Relations were not so cordial in June 2016 when the pope, during a visit to Armenia, referred to the 1915-17 mass killings of Armenians by Ottoman forces as “genocide.”

The Vatican was then forced to refute claims from Turkey that Pope Francis had showed a “mentality of the Crusades” over his use of the term.

Turkey – the Ottoman Empire’s successor state – argues that it was a collective tragedy in which both Turks and Armenians died.

On Sunday, Mr. Erdogan also insisted in a newspaper interview that Turkey wants “full membership of Europe” and did not rule out joint Italian-Turkish action in Libya.