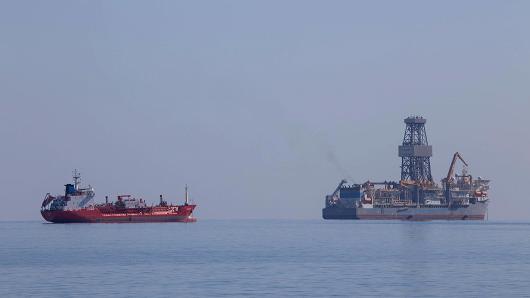 The building tension between Turkey and Greek Cyprus over the latter’s pursuit of gas drilling in the eastern Mediterranean came to a boiling point on Friday when Turkish warships blocked an Italian drilling ship working on behalf of the Greek Cypriot government.

Italy’s energy giant ENI told the Greek Cyprus News Agency that its vessel was ordered to stop by a Turkish ship son Friday over “military activities in the destination area” as it sailed to begin explorations in block 3 of Greek Cyprus’s exclusive economic zone.

Turkey and the Greek Cypriot-majority republic have sparred over resources in the eastern Mediterranean, with Ankara defending rights of Turkish Cyprus it backs on the north of the divided island.

“We are keeping calm in order to avoid any crisis and taking all diplomatic steps necessary so that finally the Republic of Cyprus’ sovereign rights can be respected,” Greek Cypriot President Nicos Anastasiades told reporters on Sunday.

“We are handling the situation by trying to avoid anything that could worsen the situation without ignoring the fact that Turkey’s actions are in breach of international law,” he added.

However, Turkey’s foreign ministry lashed out at Greek Cyprus over the “unilateral hydrocarbon-related activities” by the European Union’s most easterly member.

“It does so in disregard of the inalienable rights on natural resources of the Turkish Cypriot people, who are the co-owners of the Island,” a statement said.

“This unconstructive Greek Cypriot attitude also constitutes a major obstacle to the settlement of the Cyprus issue.”

The island has been divided since 1974 when Turkish troops intervened in its northern third in response to a coup sponsored by the military junta then ruling Greece.

Greek Cyprus announced on Thursday that exploratory drilling by Italy’s ENI and France’s Total had found extensive gas reserves elsewhere off the island in a major breakthrough in its hunt for resources.

It has signed deals with a range of firms for exploratory drilling, with U.S. giant ExxonMobil also planning two drills in the second half of 2018.

The dispute over resources in the Mediterranean is another complicating factor in efforts to reunify the island after negotiations on the 44-year feud collapsed in acrimony last year.

Turkey and Greek Cyprus are not the only countries at odds over resources in the eastern Mediterranean, with Israel and Lebanon also feuding over competing claims.

Turkish Justice Minister: 89 Percent of Arrested Had No Link to 2016 Coup