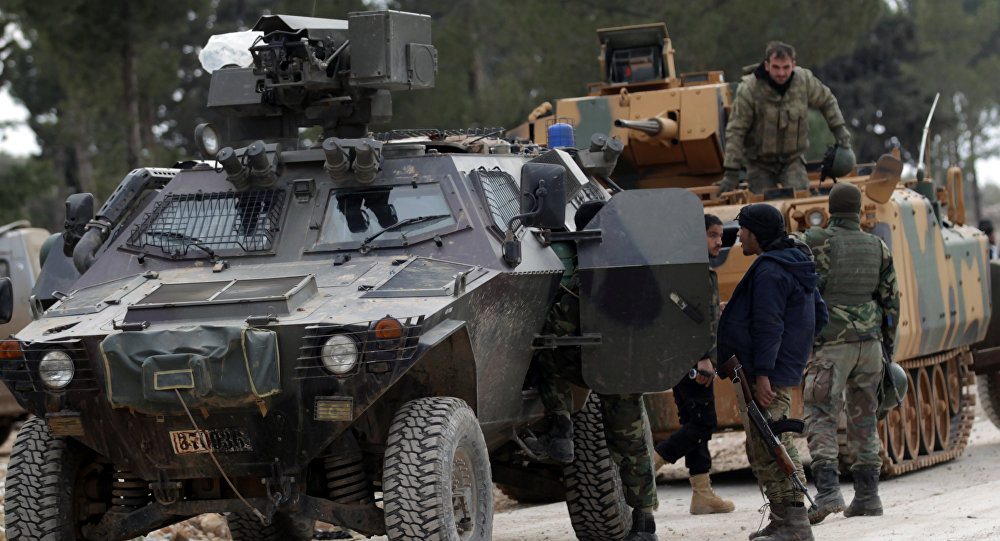 A day after the Turkish defense minister said Turkey’s de facto offensive against the Kurdish enclave in northern Syria with cross-border shelling has begun, the president went one step further and said the de facto ground assault has been launched.

President Recep Tayyip Erdogan said on Saturday that Turkey had “de-facto” launched a new operation on the ground to oust Kurdish militia from Afrin, defying US warnings that the action risked destabilizing the area.

Turkey has in recent days sent dozens of military vehicles to the border area and readied pro-Ankara Syria rebels amid repeated threats from top officials the operation on the town of Afrin was imminent.

The Turkish army has over the last two days shelled camps and refuges used by the People’s Protection Units (YPG) militia in response to fire from the militia group, which Turkey deems to be a terror organization.

“The Afrin operation has de-facto been started on the ground,” President Erdogan said in a televised speech in the city of Kutahya, without elaborating.

“This will be followed by Manbij,” he added, referring to another Kurdish-controlled Syrian town to the east.

Turkey accuses the YPG of being the Syrian offshoot of the Kurdistan Workers Party (PKK) which has waged a rebellion in the Turkish southeast for more than three decades and is regarded as a terror group by Ankara and its Western allies.

But the YPG has been the key ally of Turkey’s fellow NATO member the United States in the fight against Islamic State jihadists, playing a key role in pushing the extremists out of their Syrian strongholds.

AFP correspondents in the area around the Turkish border village of Sugedigi in Hatay province saw several more Turkish military vehicles heading south to the border.

But it was still unclear what form a Turkish ground operation will take amid considerable political and military risks.

Turkey from August 2016 to March 2017 pushed into Syria in its more than half-year Euphrates Shield operation in an area to the east of Afrin against both YPG and IS.

Analysts say that crucial for any major ground operation will be approval from Moscow which has a military presence in the area and a cordial relationship with the YPG.

With conspicuous timing, Turkey’s army chief General Hulusi Akar and spy chief Hakan Fidan were in Moscow on Thursday for talks with Russian counterparts on Syria.

Meanwhile, the Turkish threats of intervention have also raised eyebrows in Washington, which has backed the YPG as it dislodged IS and gained control of the swathe of northern Syria up to the Iraqi border.

The YPG-held enclave of Afrin marks the westernmost extent of its control and Turkey wants to make sure it is kept well to the east of the Euphrates River.

“We do not believe that a military operation… serves the cause of regional stability, Syrian stability, or indeed Turkish concerns about the security of their border,” a senior US State Department official said on Friday.

Skinner said a Turkish operation would be a “serious blow” for the US-led coalition in Syria which still depended heavily on the YPG to stabilize the area after the ousting of IS from major towns.

But Mr. Erdogan accused the United States of not keeping its past promises that the YPG would clear out of Manbij.

“The promises made to us over Manbij were not kept. So nobody can object if we do what is necessary,” said the president, threatening to pursue the operations up to the Iraqi border.

The Turkish leader had reacted furiously this week to an announcement of plans to create a US-backed 30,000-strong border security force in northern Syria composed partly of YPG fighters, describing it as an “army of terror.”

US Secretary of State Rex Tillerson later said the “entire situation has been misportrayed, misdescribed,” admitting “we owe them (Turkey) an explanation.

But Mr. Erdogan appeared to scoff at the mixed messages and lashed out at American military support for the YPG.