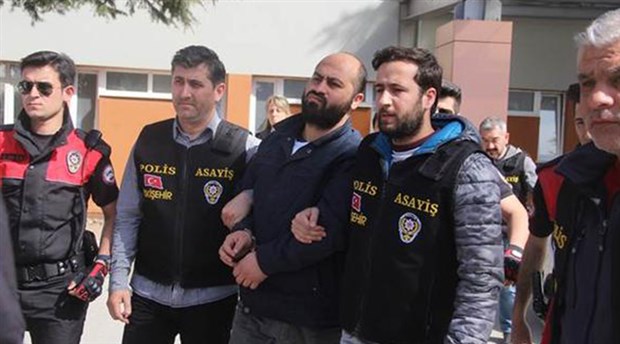 Before storming the faculty dean’s office on a rampage that killed four staff members, wounding three others in an attack that shattered the peace in a city known for its civic and affluent urban life, research assistant Volkan Bayar accused at least 45 academics of having terror ties only in Education Department of the Osmangazi University in the central province of Eskisehir.

He charged scores of academics with alleged links to FETO, a political label used by the authorities in reference to Gulen Movement. Upon his profiling and tips, tens of academics lost their jobs without any investigation, any due process or a court trial. At least 25 academics served prison time after his accusations.

His groundless charges ruined lives of his colleagues and left entire personnel fearful over their future tainted by the ever-present shadow of the purge.

Dozens of staff members pressed for a disciplinary investigation into his behaviors after his threats against other colleagues showed no signs of receding, to no avail.

The incident sparked a blame game over how things evolved to this point and whether the university administration would stop such an act beforehand given the suspect’s problematic background, his troubled engagement with almost everybody at the university.

When he killed Deputy Dean Mikail Yalcin, 33, Faith Ozmutlu, 48, Serdar Caglak, 33, Yasir Aragon, 35, many clung to the conviction that the incident was not a sudden outbreak of rage, but rather was long building out there with all looming signs.

Rattled by the campus horror, Turkey’s academia and press are now loudly asking what went wrong. Critics and opposition parties blame the toxic culture of social witch-hunt created and sponsored by the government during the state of emergency, arbitrary trials and purge in academia and civil service.

More than 150,000 public servants have either been suspended, dismissed or imprisoned on bogus charges without any due process. The latest incident was only a small part of a larger conundrum that shattered pillars of Turkey’s social fabric and exposed the breakdown of basic civic norms and mutual trust among citizens.

Rage and Horror At an Anatolian City

Eskisehir, a city of more than a million people, stands at the heart of railroad network in Anatolia, a key route of land transportation heading to the Turkish capital, Ankara. It appeared as the last bastion to stop an advancing Greek army during the War of Independence (1919-1923) and became the beacon of Kemalist principles after the foundation of the Republic.

It is home to more than 150,000 college students, the largest student population after Istanbul and Ankara. Osmangazi University and Anadolu University, which is the largest institution in the higher education system in the country with more than 100,000 students, are two major drivers of local economy and city’s affluent urban life.

The city also has the only civil aviation school in Turkey, and home to largest Turkish fighter jet fleet. Some of the jets flew to Ankara during the botched coup attempt in 2016 summer and the commander of Eskisehir Air Base currently stands trial over involvement in the coup.

On Thursday, the city’s life came to standstill. The unexpected murder broke down the sense of peace and civic public life that mostly defined the city’s social fabric to this day. 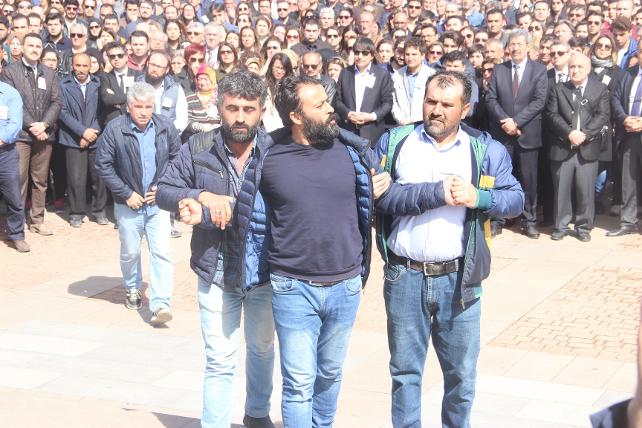 On Friday, a ceremony was held to pay respect to the fallen staff members at the university.

Mourning academics and students protested university rector, called for his resignation.  Angry families of the killed even tried to physically confront the rector. An army of media corps, senior politicians from both ruling Justice and Development Party (AKP) and main opposition Republican People’s Party (CHP) were present at the ceremony.

Upon pro-government media’s initial attempt to portray the suspect as a Gulen supporter, a statement from the university offered an opposite account, revealing a young assistant embarked on a personal crusade to taint anybody, everybody on campus with “FETO” links.

Professor Ayse Aypay, one of the survivors of the attack, pointed to the wreckage wrought by Bayar who gave lists of academics to the office of university administration for purge.

“We lodged complaints many times. After he accused my husband of FETO link, we immediately filed a complaint about that. We suffered a lot because of  Volkan Bayar,” Aypay told Artigercek news web portal.

Bayar’s case is not an isolated one, rather succinctly illustrates a pernicious pattern deeply entrenched among many layers of society and even in academia. Critics note that without the collaboration of some academics with the government, the sacking of thousands of academics would not be possible.

The murder at the university threw the issue of the toxic culture of witch-hunt back to the public spotlight, revealing the existence of human sufferings caused by other citizens over reasons of political affiliation.

President Recep Tayyip Erdogan frequently urged people to spy on their neighbors, relatives, workplace colleagues and friends if they harbor anti-government feelings and if have any link to Gulen Movement.

“You may have friends from the community. I say you have to expose them. You have to inform them to prosecutors and the police. Why? Because this is our patriotic duty,” the president said one month after the coup, according to Associated Press.

Egitim-Sen, the leading union represents teachers and academics, blamed the state of emergency measures, the politically-driven culture of profiling, spying and being voluntary informants for law enforcement, and the debilitating effect of the purge in academia.

It singled out the witch-hunt created by the purge and the push for more dismissals by looking into non-loyalists, the union said, in addressing the cause that triggered the tragic incident in Eskisehir.

Nuriye Gulmen whose year-long partial hunger strike to protest the purge in universities captured national attention also blamed the murder on the social impact of the state of emergency.

“Every university is an AKP republic, an enemy of revolutionaries and democrats. Spying and being informants have been encouraged,” she noted.

“In places where we were absent, where people who defend the truth and justice were not present, rather the opposite is encouraged, such kind of results are not surprising; rather it is quite natural.”

Ayhan Bilgen, the spokesman of pro-Kurdish People’s Democracy Party (HDP), said Eskisehir event is the embodiment of what the state of emergency means.

“If you run universities like this, how can you run the country? Then this picture came to being. Academics, mukhtars (village heads or neighborhood administrators) were encouraged to be informants.”

The tragedy is only bound to deepen as the prospect for legal remedies for those who were condemned to social death by deprivations of livelihood and right to work, either in the public or private sector, remains to be extremely dim. The Commission set up to address the complaints of the dismissed public workers only restored 100 people out of 107,000 back to their posts.

Citing to exhaustion of domestic legal channels, the European Court of Human Rights (ECtHR) also shut down the prospect of a remedy at the Strasbourg- based court.

In a sober analysis and forecast, Gulmen said she expects more incidents like Osmangazi University murder as authorities keep turning a blind eye to the social turmoil caused by the purge.