Turkey urged the United States to pull out its forces from Manbij amid repeated signals of expanding its military offensive against Kurdish enclave of Afrin to other Kurdish-controlled northern Syrian cities.

It is “necessary for them [the U.S.] to immediately from Manbij,” Turkish Foreign Minister Mevlut Cavusoglu said. His remarks signify a looming risk of confrontation between the Turkish troops and the U.S. forces who are stationed in Manbij to assist the local Kurdish militia People’s Protection Units (YPG).

The specter of an accidental encounter is not lost on both sides. On Wednesday, U.S. President Donald J. Trump called on “Turkey to exercise caution and to avoid any actions that might risk conflict between Turkish and American forces.”

On Friday, however, his Turkish counterpart Recep Tayyip Erdogan cast aside any calls, vowing to press ahead with Turkey’s military operations to neutralize the threat from YPG. The U.S.-allied Kurdish militia in Syria has both ideological and organizational links to Kurdistan Workers’ Party (PKK), Turkey’s arch-foe which resiliently waged a four-decade insurgency to establish an autonomous region in southeastern Turkey.

Last Saturday, the Turkish forces launched its offensive to uproot the YPG from Afrin, which lies along the Turkish border. But President Erdogan’s Friday remarks point to potential expansion of the offensive. 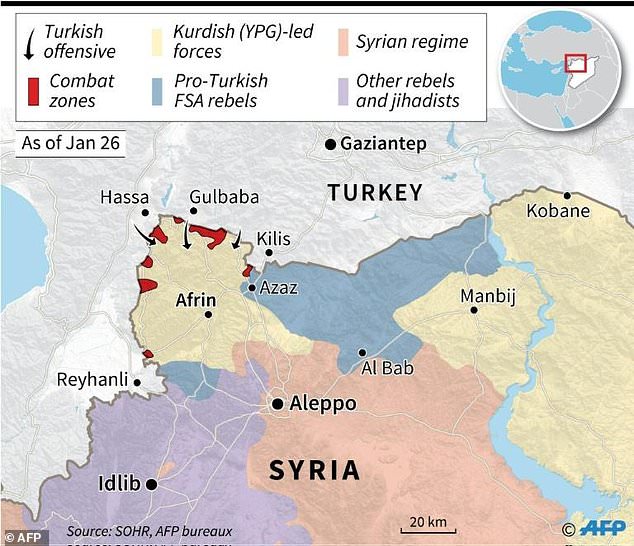 “War and clashes do not contribute to any solution. Ongoing clashes in Afrin must be immediately stopped,” Mr. Barzani said on Saturday.

US Pledges to Cut Arms Supply to YPG

The U.S. promised Turkey that it would no longer supply arms to YPG, the Turkish presidency said on Saturday. In a phone call to President Erdogan spokesman Ibrahim Kalin, U.S. National Security Advisor H. R. McMaster pledged to cut the arms shipment to the group deemed as terrorist by Turkey.

“It was emphasized that Turkey’s legitimate security concerns must be paid attention to. It was agreed that close coordination would be carried out in order to avoid misunderstandings,” a statement by the press office of the Turkish presidency said.

The issue has remained a source of lasting friction between two allies.

Turkish Prime Minister reserved his fires for the U.S., accusing Turkey’s ally of revising territorial designs in the region at the expense of regional countries.

“No country, coming to the region from thousands of miles away, has the right to envisage territorial designs,” Mr. Yildirim said on Friday, referring to the U.S.

“A country which we know as our ally incessantly arms PKK [YPG] in Syria,” the prime minister said.

He lamented that the YPG gets some weapons free of charge while Turkey is unable to purchase them with money from its ally.

Earlier this month, the U.S.-led coalition against Islamic State confirmed that it would establish a 30,000-strong border force. Half of the new force was expected to comprise of Kurdish fighters.

The U.S. plan ruffled feathers in Ankara, stoking flames of tension and fury in Turkey. The rippling effects of the decision, despite partial backtracking and revising the original plan, have still had reverberations that shape the tone of discourse among the Turkish leadership.

“This is open enmity,” the prime minister fulminated, two weeks after the announcement.

Turkish forces and its allied rebel fighters are making some headways in the northwest of Afrin, albeit slowly given the formidable weather conditions and mud that block movement of the vehicles in some parts of the terrain.

The Turkish officials say 394 “terrorists” have been eliminated.

The British-based Syrian Observatory for Human Rights said 111 Turkey-backed rebels and Kurdish fighters have been killed since last week. According to the watchdog which has been monitoring the Syrian conflict since the outbreak of the uprising in 2011, 38 civilians were also killed.

Ankara has denied reports of civilian casualties as propaganda.

YPG press office released videos of destroyed Turkish tanks. It claims that so far four tanks have been destroyed.