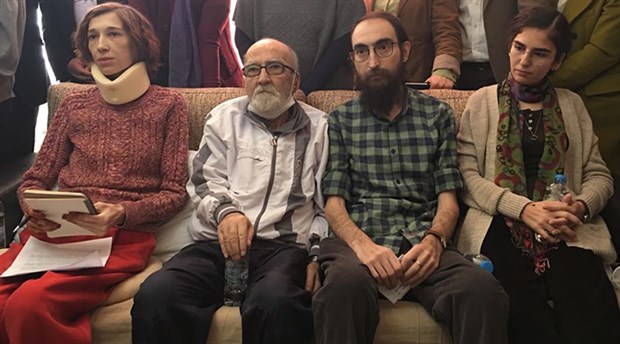 Nuriye Gulmen and Semih Ozakca, one academic and a high school teacher who were observing hunger strike for 324 days to protest their dismissal in the aftermath of the 2016 failed coup, announced that they end the protest after their application seeking to be reinstated to their posts was dismissed by a commission.

Names of Ms. Gulmen and Mr. Ozakca have been associated with peaceful resistance and civil disobedience to protest the sweeping purge carried out by the government since 2016 failed coup.

Last year, they launched a hunger strike to demand their jobs back. Their peaceful protest capped a growing social discontent over the government’s unrelenting purge campaign in civil service and universities.

On Thursday, the two held a brief press conference after their application to the Commission of State of Emergency, which reviews the cases of purged public workers, was overturned by the commission.

The two protesters were brought to a hospital in Ankara for medical treatment after the announcement.

“Our resistance gave us freedom. We love our resistance, which helped break the darkness of OHAL [state of emergency]. We do not have any of our own [TV] channels, so we went out to streets and told [our cause] to people one by one,” Ms. Gulmen said during the press conference.

What started as a small sit-in protest, she underlined, later morphed to be a symbol of resistance known by millions of people.

Mr. Ozakca also extolled the virtues of the resistance. “We faced so much torture, repression to break our will. But this resistance has won,” he said.

“Now people, their heads held high, can proclaim that they faced injustice,” he added, underscoring that at least they battled to the end and eliminated the pervasive nature of despair and fatalism that gripped the society.

The two also said they would appeal the commission’s decision to an upper court in an effort to continue their battle.