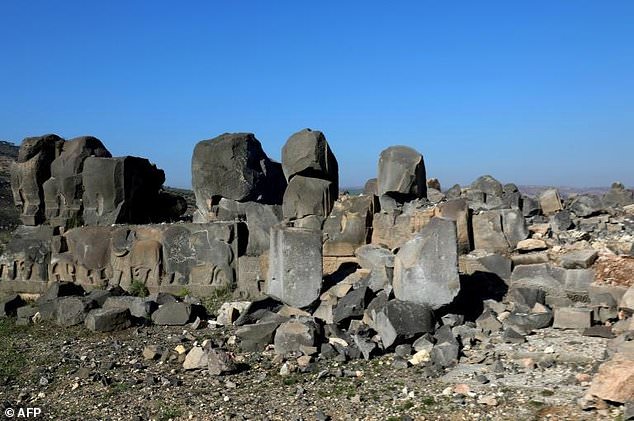 The Turkish offensive takes its toll on an ancient site in northern Syria.

For 3,000 years, the lion sculptures of Syria’s Ain Dara stood as testaments to the Iron Age. But as Turkish bombardment pounds the region, they have little left but their paws.

Syrian and Kurdish authorities have blamed the damage squarely on Ankara’s nearly two-week offensive on Afrin, a Kurdish-controlled pocket of northwest Syria that borders Turkey.

Perched on a hilltop in northern Syria, the neo-Hittite temple of Ain Dara dates back to the Aramaic era from around 1,300 to 700 BC, and is named after a village located in Afrin.

The identity of the deity worshipped there has not been officially determined, but one theory is that it is Ishtar, the goddess of love.

Until last week, the temple stood as “one of the most important monuments built by the Aramaeans in Syria during the first millennium BC,” according to Syria’s department of antiquities.

Today, visitors can barely make out the dark, engraved steps that once led into the temple but are now covered with rocks and debris.

And the frescoes of imposing winged animals carved in black basalt stone have been reduced to indistinguishable piles of rubble.

Only the temple’s rear section was spared, including a basalt sculpture of a lion standing guard, overlooking the green hills of Afrin.

“I was sitting right there,” said Ahmed Saleh, pointing to the steps of his home in the adjacent village of Ain Dara.

“The strike was so fierce that we were really shaken up. Then, the smoke began to rise up from the hill,” said Saleh, his head wrapped in the ubiquitous red-and-white checkered scarf of local residents. 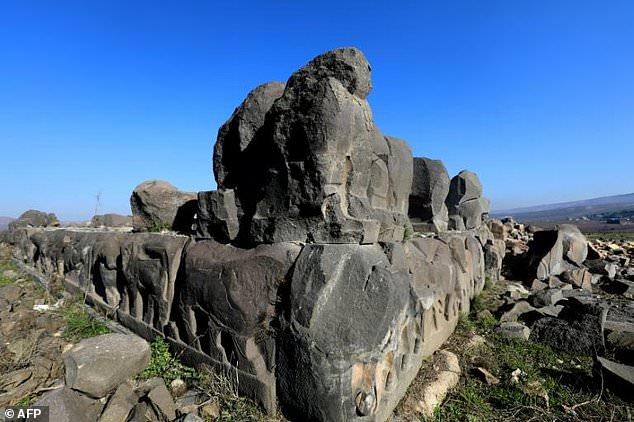 Between 40 to 50 percent of the site was damaged, estimated Salah el-Din Senno, an archaeologist and member of Afrin’s local antiquities council.

Senno pointed to old photographs of the temple hung around the walls of his office.

“The damage began from the entrance and extended to the interior — the legendary animal statues, guardians of the temple, and other sculptures representing the gods were scattered” by the force of the blast, he said.

Ankara considers the YPG a “terrorist” organization and has pledged to oust them from the area.

The Turkish military has insisted that “religious and cultural buildings, historical sites, archaeological ruins and public facilities are absolutely not among the targets of Turkish Armed Forces,

But government authorities in Damascus, Kurdish officials in Afrin and the Syrian Observatory for Human Rights monitoring group have all accused Ankara of damaging Ain Dara.

Speaking on condition of anonymity, a UNESCO official told AFP the Ain Dara temple had been special.

“The temple is an important example of Syro-Hittite religious architecture and the most extensively excavated structure of its kind in Syria,” said the official.

The bombardment caused “heavy damage to the central and southeastern portions of the building” and some features “have been blasted into fragments,” the official said.

Syria has been rocked for nearly seven years by a ferocious conflict that has killed more than 340,000 people and displaced millions.

UNESCO-listed heritage sites around the country have also been ravaged, including Aleppo’s celebrated Umayyad mosque and the desert city of Palmyra.

Islamic State group fighters deliberately destroyed the famed tower tombs in Palmyra, its statue of the Lion of Athena and the main Temple of Bel.

“It is a catastrophe in all meanings of the word. Three thousand years of civilization destroyed in an air strike,” Mr. Abdulkarim told AFP.

He also voiced concern for 40 old villages in Afrin, dubbed the “Ancient Villages of Northern Syria”.

According to the UNESCO, the villages date from the 1st to the 7th centuries and feature the remains of homes, pagan temples, churches and bathhouses.