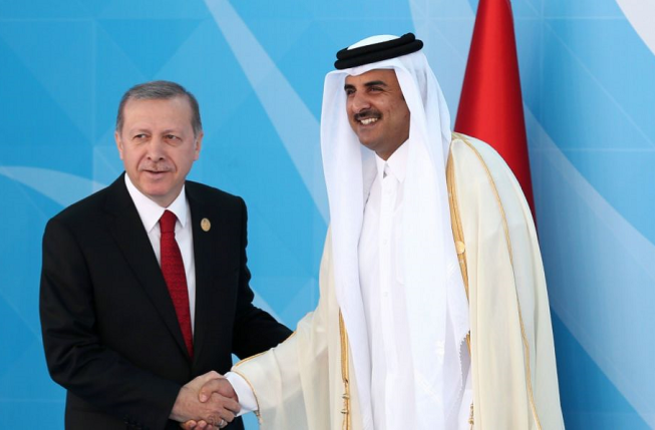 Qatar Emir was in Turkey for diplomatic talks with Turkish authorities to hammer out common responses to regional disputes that concern both countries.

The talks, announced only hours in advance, got underway at Mr. Erdogan’s presidential palace in the capital Ankara, the Turkish presidency said.

President Erdogan has been a major supporter of Doha in the crisis that has left Qatar diplomatically and economically isolated.

On 5 June 2017, Saudi Arabia, Bahrain, the United Arab Emirates and Egypt cut ties with Qatar accusing it of backing extremism and fostering ties with their Shiite rival Iran.

Doha, however, denies the claims and Ankara have insisted there is absolutely no evidence to back them.

In the meantime, Turkey and Qatar hold a joint economic forum in Doha to bolster economic relations on various fields, infrastructure, defense industry, construction and other sectors.

The Turkish Embassy in Doha and project development company Medyacity are organizing ‘Expo Turkey 2018’ from January 17 to 18 at the Doha Exhibition and Convention Centre (DECC), Al Bawaba reported.

The latest meeting between the two men came as the UAE accused Qatar of “intercepting” two Emirati passenger planes en route to Bahrain.

Erdogan has strongly denounced the sanctions against Doha and, in a show of solidarity, Turkey has also sent cargo ships and hundreds of planes loaded with foodstuffs.

In recent years, Qatar has emerged as Turkey’s top ally in West Asia, with Ankara and Doha closely coordinating their positions on a number of issues.

Notably, both are outspoken against Syrian president Bashar al-Assad.

Ankara has a military base in Qatar, a key foothold for Turkey in the Gulf.

But Turkey also does not want to wreck its own relations with regional kingpin Saudi Arabia and its hugely powerful new Crown Prince Mohammed bin Salman.

Erdogan has carefully worked to improve Ankara’s relations with Riyadh, hit in 2013 by the ouster of president Mohamed Morsi in Egypt, a close ally of Ankara.

The Turkish leader has levied only the most veiled criticism against Saudi Arabia during the crisis, although the pro-Erdogan Turkish press has repeatedly bashed the kingdom.

Tensions with UAE, however, flared when UAE foreign minister Sheikh Abdullah bin Zayed al-Nahyan retweeted a post on Twitter last month critical of the former Ottoman rulers of the region.

Ankara in response renamed the street in the Turkish capital where the UAE embassy is located after the Ottoman governor of the time.

In Sign of Resentment, Erdogan Says Does Not Consider Calling Trump