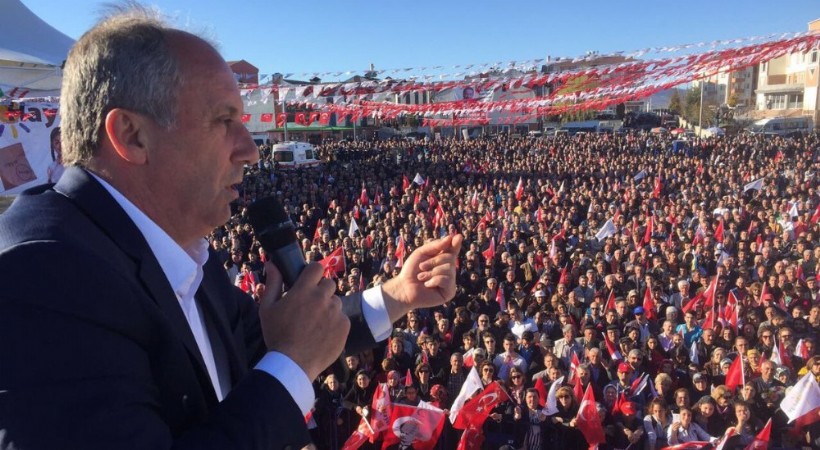 As Turkey’s economy shows signs of a crisis, corruption and nepotism emerge as the central elements upon which presidential candidate of main opposition Republican People’s Party (CHP)  mostly dwells. And as people rail against pernicious effects of the prolonged state of emergency on their daily life, Muharrem Ince, a former teacher and school principal who built his political career within the ranks of CHP, vows to end the emergency rule on the day he is elected.

Only months ago, Turkey’s secular opposition CHP saw a tussle for party leadership between Ince and its current Chairman Kemal Kilicdaroglu. The latter’s grip over the party has become a major driving force for an intra-party insurgency after a building discontent over a history of poor performance at the ballot box. Ince even accused Kilicdaroglu of building a dictatorship within the party to stifle dissent. The bad blood between them, however, evolved into a different form of relationship when Kilicdaroglu named Ince, the same man whom he defeated in party congress in February, as CHP’s presidential candidate.

“The first step to be taken for the rule of law will be the removal of emergency rule,” his manifesto reads.

“Necessary reforms and regulations will be made for the relevant state institutions, particularly the Constitutional Court, to fulfill their duty of carrying out impartial and democratic inspection. Competent and impartial judges will be able to inspect elected officials,” he says in the manifesto.

After coup attempt on July 15, 2016, two members of Constitutional Court and more than 3,500 judges and prosecutors have been arrested and sacked in the government crackdown. The purge left Turkey’s judiciary in a state of disarray, as political pressure over courts compromised its workings.

With the purge, nearly 160,000 people have either been dismissed or sacked. Same number of people have been detained.

Ince slams President Recep Tayyip Erdogan for meddling in Central Bank’s policy-making. The CHP candidate also accused Erdogan of driving the country to the edge of the cliff.

“He is taking the country to the cliff. The Central Bank needs to be independent and other economic bodies need to be autonomous. The rules need to operate,” the candidate told Reuters last week.

His remarks came after the president told Bloomberg that he would seek a greater say in determining monetary policy. Erdogan’s signal for potential intervention in monetary policy sent shudders among international markets and investors. In a statement on Tuesday, Fitch warned that Turkey’s sovereign credit profile would come under pressure if the independence of Central Bank is curtailed after the June 24 elections.

The soaring inflation causes a dramatic rise in the prices of basic goods. On Tuesday, Turkish lira fell to 4.80  against the U.S. dollar. Later on the day, it bounced back to 4.75 liras.

Ince first and foremost pledges to fight against corruption. He vows to raise Turkey’s minimum wage to 2,200 liras from the 1,603 liras.

“Within three-and-a-half years we will create at least five global brands. And within five years unemployment will drop to five percent,” he said.

Turkey’s media is in bad shape. At least 180 media outlets have been shut down and more than 150 journalists are currently in jail.

As recently as Friday, Turkey’s Transportation Minister Ahmet Arslan noted that the ban on Wikipedia, an online encyclopedia, will remain in place until the platform removes content claiming that Turkey supported the Islamic State (ISIS) in Syria.

“You will tweet freely. I will open Wikipedia. I will shut down Passolig,” the candidate said on Tuesday.

Ince noted that citizens’ freedom to criticize the president of Turkey is a must in order to remain creative and productive.

He also embraced the idea of a strong parliamentary system and pledged to relinquish some of the powers accrued to the president in the new executive presidential system.

“No mortal should be given such authority. It shouldn’t be given to me either,” he told Reuters.

In his manifesto, he proposes some form of decentralization of policy-making with handing some of the powers to local government and administrations across the country.

He builds his manifesto on five major components or pillars: justice, democracy, economy, foreign policy and education. The candidate vows to tackle problems emanating from the lack of rule of law, a deteriorating economy and a misguided foreign policy.

Among opposition candidates, CHP emerges as the strongest one in poll standings. To his advantage, Good Party (IYI) Chairwoman and presidential candidate Meral Aksener pledged to support Ince if he goes to the second round of elections against Erdogan.

Whether he would stand a chance against the incumbent president, it remains to be seen.