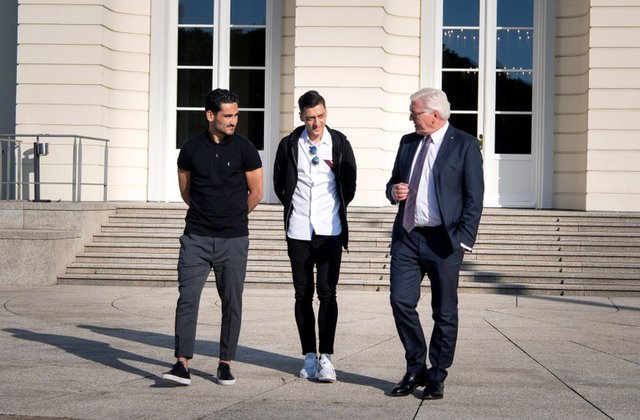 A week after being entangled in a political controversy for a picture taken with Turkish President Recep Tayyip Erdogan in London, Germany’s soccer stars Mesut Ozil and Ilkay Gundogan met with German President Frank-Walter Steinmeier to end the debates over their commitment to the country.

When both players, who are of Turkish descent but play for the German side, met with Erdogan and posed a for a photo, it produced a deluge of criticisms from all parts of the German political landscape. The players suddenly found themselves at the center of political conversation over immigration, assimilation and integration, issues that redefine the boundaries of German politics.

Politicians and senior officials of the German Football Federation (DFB) were quick to denounce players for allowing themselves to “be exploited” by a politician whom Germans are united to loathe.

“The two players contacted us and the DFB and wanted to clear this issue up,” German national team coach Joachim Low told media members.

“The German president suggested they meet with him as well. There was a discussion. Now we can start talking about other things,” the coach said, according to Reuters.

During their meeting with Erdogan in London, both players gave Arsenal and Manchester City jerseys to him.

DFB President Reinhard Grindel who harshly reacted to the photo incident said both players assured them that “they had not wanted to send any political signal with that action.”

The Turkish leader’s post-coup crackdown and squelching of media put Turkey-Germany ties at a difficult spot.