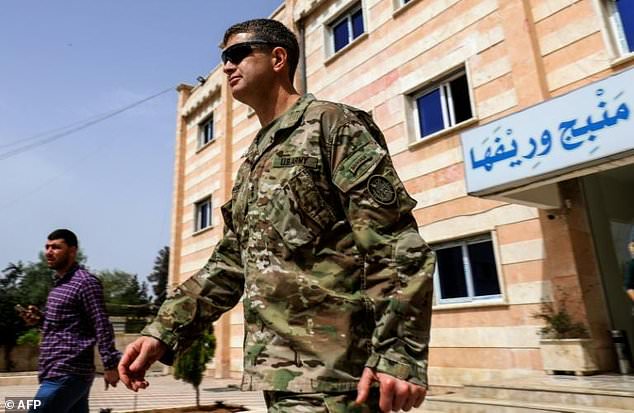 An anxious waiting takes place in Kurdish-held city of Manbij after the fall of Kurdish enclave of Afrin to Turkey-backed forces, with locals fearing of a potential new Turkish offensive against their city.

In Manbij, salesmen shout as customers bustle through the city’s packed marketplace — an everyday scene that masks residents’ deep fears of a Turkish attack.

Despite the presence of the U.S. troops nearby, Manbij could become the next target of a Turkey-led battle against Kurdish militia in Syria’s north.

“Everybody’s scared, me included,” said Hameed al-Damalkhi, 50, bent over a sewing machine as he stitched the sole back onto a used trainer at his shop in Manbij’s covered market.

He said he was still shocked by images of pro-Ankara fighters looting in Afrin, breaking into shops and homes and heading off with food, blankets and even motorbikes after Kurdish fighters retreated.

“What we hear about them is they’re all thieves. You saw, they looted the whole (Afrin) area,” he said, wearing a stained grey robe and greying beard.

Turkey has said it aims to dislodge the Kurdish People’s Protection Units (YPG) militia, which it labels a “terrorist” group, from the length of its border with Syria.

“Where does he think he’s going?” Damalkhi said, referring to Mr. Erdogan. “There are men here who can protect the area.”

The YPG has gained a reputation as a formidable force, especially as the backbone of a U.S.-backed alliance that expelled the Islamic State group from much of Syria.

‘Guarantees’ From the US

Rebels overran the town in 2012. ISIS seized it two years later, turning it into a key transit point for fighters, weapons and cash between the Turkish border and its then de facto capital of Raqa, further southeast.

The U.S.-backed and YPG-led Syrian Democratic Forces (SDF) took control of Manbij last year, handing the city’s management over to a Civil Council.

Dozens of American troops have since been stationed on the city’s outskirts, with additional troops deployed there around a year ago.

Their presence offers some comfort to residents, especially after a delegation from the State Department and the US-led coalition visited the city council this week.

Ali al-Sattaf, 50, who works at a money exchange, said the presence of US troops nearby was reassuring.

“It makes us feel that nothing will rain down from the sky,” he said.

The YPG retreated from Afrin in the face of formidable Turkish and rebel firepower, including air strikes that pounded the Kurdish enclave.

The U.S.-led coalition stayed out of the battle for Afrin, but its presence outside Manbij has raised the specter of a potential conflict between two NATO allies should Turkey attack the city.

The aim of the visit was “to reassure the population”, council co-chair Ibrahim al-Kaftan said after the meeting.

“There will be no attack on Manbij, and we received guarantees from the delegation on this matter,” he said.

In Manbij’s Martyrs Square hang portraits of SDF fighters — women and men — killed in the fight against ISIS.

Some of the city’s wall still bear the marks of the jihadists’ brutal rule, its slogans and infamous black flag.

In the market, a man wearing a red-and-white scarf walked by carts piled high with apples. Another man darted past on a motorbike, while women in long black robes inspected shoes in a shop window.

Rim, a veiled 30-year-old mother who had come shopping, said she didn’t want to see fighting in Manbij.

“We live in safety now, but we fear for our kids,” she said, as she clutched the hands of her two children.

“We’re tired and our kids are tired from all the fear, the planes and the war,” she said.