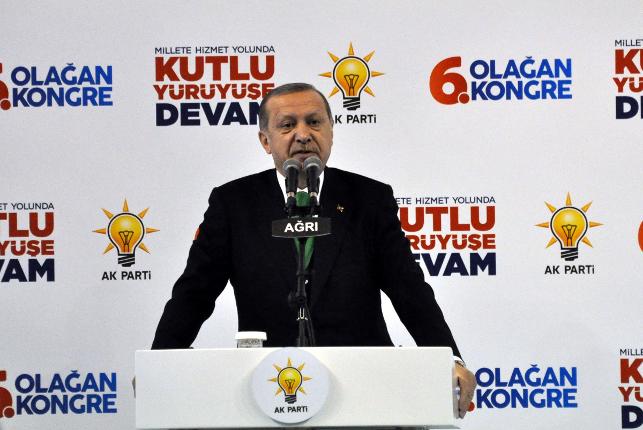 In a surprise turnaround, Turkey’s President Recep Tayyip Erdogan urged the militant group, Kurdistan Workers’ Party (PKK), to stick with the political path rather than armed struggle, leaving door open for the resumption of political dialogue after three years of bloody fighting following the collapse of ceasefire and peace process in 2015.

“If you properly remain in Parliament, then remain. If those who are in the mountains enter politics with the right mindset, then [let] them do it,” President Erdogan said on Friday.

“If they [PKK] challenge the Turkish Republic, these places will be graves for them,” he said in a dire warning to the militant group which has waged a decades-old insurgency against the Turkish state in a bid to carve up an autonomous zone in southeastern Turkey.

The first line of his sharp criticism aimed at pro-Kurdish People’s Democracy Party (HDP) whose members and a dozen of lawmakers have been placed behind bars.

His remarks came as he informed ruling Justice and Development Party (AKP) supporters on Friday about the latest situation in northern Syria, the aftermath of Afrin offensive and the fighting against PKK.

Bragging the military success after the takeover of Afrin from PKK-related People’s Protection Units (YPG), President Erdogan praised the Turkish forces over targeting terrorists in their caves, cells and wherever they are.

Still, unexpectedly he hinted a potential move for reviving freezing process aimed at finding a political settlement to the protracted Kurdish conflict that consumed more than 40,000 people’s lives in the past four decades.

The bloody fighting condemned southeastern parts of Turkey into relative underdevelopment in comparison to other advanced regions of the country in economic terms.

Mr. Erdogan’s ruling AKP led groundbreaking reforms to enrich cultural and social rights of Kurds neglected by many governments in the past. The Turkish leader also took a robust initiative, holding talks with jailed PKK leader Abdullah Ocalan, and later PKK leadership in northern Iraq for a lasting resolution of the armed conflict.

PKK announced the withdrawal of its guerrillas from Turkey in March 2013. The two-year fragile ceasefire abruptly ended in June 2015 after pro-Kurdish People’s Democracy Party (HDP) entered Parliament, depriving AKP of its parliamentary majority for the first time since 2002.

The war broke out again. This time, the militant group adopted urban warfare and brought the fighting to cities, sparking displacement of hundreds of thousands of people from their homes when the Turkish security forces responded to PKK presence in cities with a heavy-handed approach.

Divergent Views on Display at Turkey-EU Summit in Bulgaria