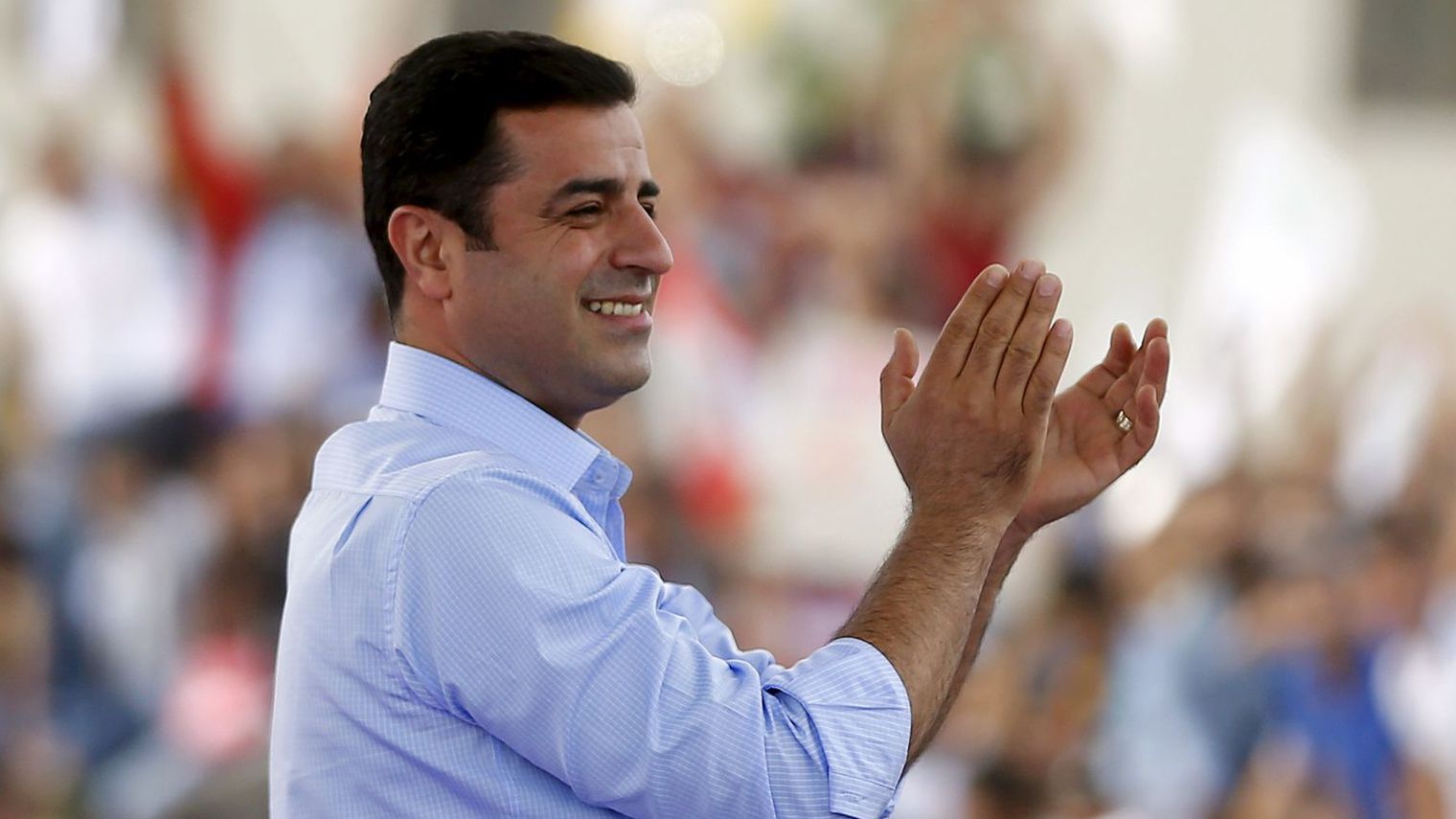 “I’ll bring together a Turkish mother and a Kurdish mother who lost their sons during clashes [between Turkish security forces and Kurdish militants] and will ask their support for peace as my first action,” said Selahattin Demirtas, a candidate of pro-Kurdish People’s Democracy Party (HDP) running in presidential elections.

Demirtas who is currently in jail pending trial over a number of charges fights against a myriad of odds from his prison cell. The politician is still upbeat despite unfavorable conditions that beset his campaign.

Turkey’s presidential race takes place in an atmosphere, distinctively and vividly different from the previous elections. There are five major candidates running for the top post in the executive system — the presidency which has become ever important especially after a switch to the executive presidential system with a constitutional amendment last year.

It is hard to talk about a fair and free competition under the state of emergency. Zeid al-Hussein, U.N. High Commissioner for Human Rights, said that “it is difficult to imagine how credible elections can be held in an environment where dissenting views and challenges to the ruling party are penalized so severely.”

The media is virtually under the government’s control, with mainstream and pro-government media outlets accruing an unrivaled amount of time to President Recep Tayyip Erdogan while his rivals get little space from media.

There is more plurality in terms of candidates, and there is hope in the air for all flaws and unpromising prospects of the current emergency rule.

But among all candidates, Demirtas provides a different tale. While other candidates, be it nationalist Good Party (IYI) leader Meral Aksener, or main opposition Republican People’s Party (CHP) candidate Muharrem Ince or Islamist Felicity Party leader Temel Karamollaoglu, are able to hold rallies without restriction, an election rally is off-limits to Demirtas.

His wife Basak Demirtas said after visiting his husband that Demirtas will hold a one-man rally in his prison cell.

Outside, his party is doing Demirtas’ campaign bid on his behalf. Last week, he laid out an ambitious program in an interview with a journalist. Peace, among other things, is the central pillar of his election promises and he vows to end the decades-old conflict in southeastern Turkey, a region that has been buffeted by a war between the Turkish state and outlawed Kurdish militants.

In a gesture of comity, CHP candidate Ince visited him in Edirne prison while Good Party candidate Aksener called for his release to run his campaign freely, uninterrupted. It was an unusual step from Aksener who has a hawkish stance regarding resolving Turkey’s Kurdish conflict.

Demirtas lamented about the limitations imposed upon him. He said he can only send messages to his constituency and supporters through his lawyers and via mail.

“I’m sorry for this absolutely unfair and unequal situation on behalf of my constituency. But personally, I’m very high spirited and strong,” he said, rejecting resignation over his situation.

He vowed to end the state of emergency and restart frozen EU membership negotiations.

“We will take a more peaceful stance in foreign policy and resolve the Kurdish conflict through peaceful means. All of these will also inject breath to the economy,” he told German WDR.

He added: “We would be able to kickstart a locally driven development model so as to reduce current account deficit, inflation and unemployment.”

Turkey witnessed the rise of the Kurdish politician, a human rights lawyer, in 2014 when he first became a presidential candidate against Erdogan and Ekmeleddin Ihsanoglu in the presidential election. His wide sense of humor and witty swipes against Erdogan who was then ensnared in a sprawling corruption scandal endeared him to larger segments of society.

The next year, he cruised HDP to Parliament, the first time in the history of Kurdish political parties. To circumvent Turkey’s notoriously high electoral threshold, the Kurdish parties normally proposed independent candidates to be represented in Parliament. Embracing the risk of total exclusion, the HDP entered June 2015 elections as a party and garnered more than 80 seats.

Its rare feat of success sealed ruling Justice and Development Party’s (AKP) first electoral debacle by losing its parliamentary majority for the first time since its ascension to power in 2002.

But things for Demirtas as well as his party quickly fell apart with the resumption of the fighting between the Turkish security forces and outlawed Kurdistan Workers’ Party (PKK) militants across the southeast after a two-year lull in the conflict due to peace process and truce.

The return to war dented Demirtas’ abilities as he found himself torn between Erdogan’s relentless assaults and PKK’s urban warfare. In the next election held due to lack of formation of a government, HDP lost nearly half of its seats as the ruling AKP won back nationalist votes due to the intensification of the fighting in the southeast.

The July 2016 coup became a turning point for the HDP and Demirtas. A full-scale crackdown followed the failed coup and Demirtas, along with other co-chair Figen Yuksekdag, have been remanded. At least 12 Kurdish lawmakers and thousands of its members are currently in jail pending trial.

It is against this backdrop, Demirtas tries to ensure his voice hear in the society. He appeared at several hearings after 400 days of pretrial imprisonment. Prosecutors accuse him of abetting a terrorist organization. Charges countless. He faces up to 140 years in prison if convicted.

His lawyers appealed to the Ankara 19th High Criminal Court, seeking his release on the ground that his ongoing imprisonment is a blatant violation of “free and fair campaigning.” But the court on Monday rejected that request, the Turkish media reported.

“We condemn this lawless decision which prevents an equal and fair election. Every day that Demirtas, the candidate of millions, is not with his voters will cast a shadow on the June 24 elections and put into question its legitimacy,” the HDP said, according to Reuters.