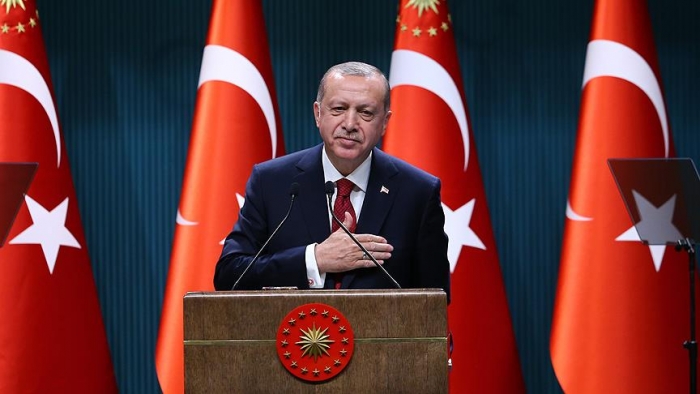 President Recep Tayyip Erdogan’s Wednesday announcement of snap election to elect the next president and Parliament on June 24 has sparked mixed reaction across wide segments of the political spectrum and the society, with opposition equating the move with a “political coup.”

“Although the president and government are working in harmony as much as possible, the diseases of the old system confront us at our each step,” the president said at a press conference after a meeting with his nationalist ally, Nationalist Movement Party (MHP) leader Devlet Bahceli, to discuss the proposal raised by latter the previous day.

“Turkey’s cross-border operation in Syria, and the situation in both Syria and Iraq forced Turkey to overcome uncertainties as soon as possible.”

“Developments in Syria and elsewhere have made it critical to shift to the new executive system so that we can take steps for our country’s future in a stronger manner,” he added, explaining the motives that pushed him and his party to seriously mull Bahceli’s suggestion to change the election date.

Caught flat-footed by President Erdogan’s sudden change of heart about an early election, the opposition mostly deemed the move as a coup, a sign of distress and fear of a possible electoral defeat for the president.

Main opposition Republican People’s Party (CHP) welcomed it but showed signs of confusion within the party over naming its candidacy.

Chairman Kemal Kilicdaroglu said his party council will nominate the CHP’s candidate for the presidency and vowed that CHP will bring peace and prosperity to Turkey in June.

Newly established nationalist opposition IYI (Good) Party has found itself at the center of a political controversy from a different point. According to the Turkish electoral law, a party must prove that it is up and running for at least six months since the first party congress before entering an election.

The air of confusion, therefore, appears to be prevalent among Good Party’s rank and file, with its spokesman and leader offering two conflicting accounts over its eligibility for participating the election. Party Spokesman Aytun Ciray previously said Good Party held its first congress on Dec. 28, a date which makes impossible for the party to join June 24 elections.

But on Wednesday, Good Party Chairwoman Meral Aksener said it was Dec. 10 when the party held the first congress, therefore, it is eligible to take part in these upcoming presidential and parliamentary elections.

She also announced her presidential candidacy. The controversy is bound to prolong after Supreme Election Board (YSK) head Sadi Guven’s opaque statement about whether authorities would allow Good Party to run in the elections.

The matter is of grave importance since rising popularity and prospects of Aksener seem to spook ruling Justice and Development Party (AKP) over an emerging contest to woo nationalist votes.

“They are alarmed and scared. But this rush to early elections would not save them from their inevitable defeat,” an upbeat Aksener told her supporters in the western province of Mugla on Thursday.

With the latest development, Turkey waded into another election wilderness. So far now, five people have announced their presidential candidacy.

Perincek who forged an alliance of convenience with President Erdogan to purge their rivals in the judiciary, the military and other sectors of bureaucracy, voiced strong objection to the move, which he called a “political coup.”

“Recep Tayyip Erdogan and Devlet Bahceli have no authority to call for a snap election. You can only take decision for a coup, or an illegal policy,” he said, reflecting a consensus on the side of the opposition. “It is only Turkish Parliament that can call for an early election.”

“Ther are two motives here. One is to not leave enough time to the opposition to name a common candidate for the second round of elections. Second is to roll back the rise of Felicity Party and Good Party,” he wrote on Wednesday.

To Gunay, no president was as much associated with a political party as the current one, pointing to the blurring lines between the supposed impartial status of the presidential office and other political parties.

Even between 1946 and 1960, when presidents Ismet Inonu and Celal Bayar faced charges of too much association with their respective parties, CHP and Democrat Party, it was never plain and brazen as today, he noted.

There was at least a semblance of respect for the integrity and neutrality of the presidential office, and presidents paid a great deal of attention to the public perception of their standing for equal distance to all parties.

Since last year’s controversial referendum, Gunay argued, Erdogan has shown no such scruples when acted as leader of a political party, thanks to a change by the constitutional amendment that spawned the era executive presidency. According to the new system, the head of state could also retain its status of a political party.

“The situation of Parliament appeared as another grave reality today. Parliament is the authorized institution to call for an election. Unless Turkish Parliament makes a decision, all other statements are nothing but proposals or expectations,” he said, registering his dissent with the election call over legal disputes.

“It is very telling that all public institutions acted, heeded in response after the president’s announcement as if Parliament made a decision.”

There are mounting speculations coalescing around the name of former President Abdullah Gul for running in the race. But the veteran politician showed no signs of returning to politics.

The June 24 election also unleashed a new torrent of forecasts and questions over the prospects of candidates, even though Erdogan is seen as the frontrunner.

Abdullatif Sener, one of the founding fathers of the AKP who later broke away from the party after a public split with Erdogan in the late 2000s, said Turkey’s Kurds will be kingmakers to shape the outcome of the presidential vote.

“With the rush for a snap election, it seems that the government wants to leave the opposition unprepared and in shambles,” he said.

21 Months on, Emergency Rule Creates ‘Empire of Fear’ in Turkey