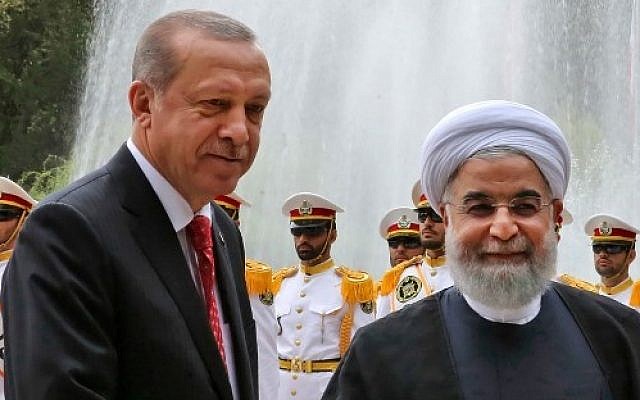 In a display of endorsement, Turkey’s president expressed sympathy and approving remarks for embattled Iranian president’s statement regarding sprawling protests by disgruntled and disaffected middle class and the working class over a stumbling economy.

President Erdogan underlined the importance of preservation of “peace and stability” in Iranian society and expressed endorsement of Mr. Rouhani’s statement that protests should not lead to “violations of the law.”

The Turkish leader survived month-long nationwide protests against his rule during 2013 summer over a government project in Istanbul’s Gezi Park is not fond of expression of discontent through mass public rallies.

Protests, which broke out in Mashad, Iran’s second largest city, last Thursday have not been roiling major Iranian cities, including Tehran, while death toll rose to 21.

In his conversation with Mr. Erdogan, Mr. Rouhani said protests would end in a few days.

“President Rouhani thanked President Erdogan for his sensitivity and expressed hope that the protests would end in a few days, a statement by a Turkish presidential source said, according to AFP.

Turkey — which was hit by street protests against Erdogan (then premier) in 2013 — had already said it was concerned by the protests and warned against any escalation.

The almost week-long unrest in Iran, the biggest challenge to the Islamic regime since the 2009 mass demonstrations, has so far claimed 21 lives.

Turkey, whose rivalry with Iran goes back to the regional battle for supremacy between the Ottoman Empire and imperial Persia, has had on occasion tricky moments in relations with Tehran.

Erdogan has repeatedly railed against “Persian imperialism” in the Middle East but relations have warmed in the last months as Moscow and Tehran work tightly with Ankara to bring peace to Syria.

Turkey’s conservative press has sounded grave unease over the protests, accusing the United States and its allies of fomenting the unrest as part of a plot to transform the Middle East.