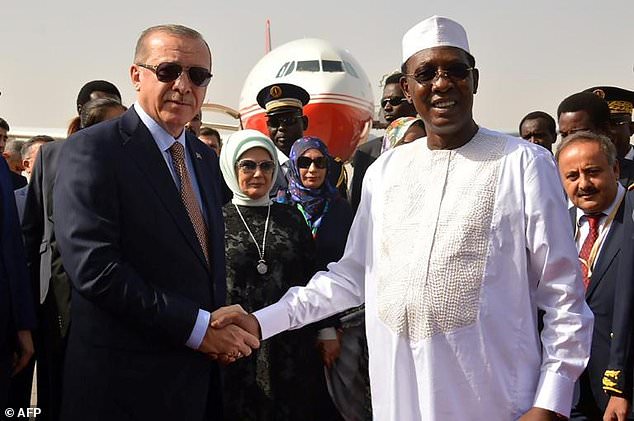 President Recep Tayyip Erdogan is expanding Turkey’s reach in Africa as he signed a number of trade deals with Chad on Tuesday, on his first visit to the country.

After landing at the airport in the capital N’Djamena, where he was met by his counterpart Idriss Deby, the two leaders made deals in a number of areas, including income tax, cooperation on youth and sports, technical development, investment and information-sharing, according to a statement by the Chadian presidency.

President Erdogan headed a delegation of a dozen ministers, including defense and foreign affairs, as well as 100 Turkish businessmen.

On a trip which the Chadian presidency said would “open a new page in the deepening of relations between the two countries”, the two leaders also expressed agreement on key international issues, such as terrorism and the Israeli-Palestinian conflict.

As fresh tensions simmer in the Israeli-occupied West Bank following US President Donald Trump’s recognition of Jerusalem as Israel’s capital, Erdogan and Deby said the move could have a negative impact on peace and stability in the region and would entail a risk of completely destroying the foundations for peace.

The Chad visit is part of the Turkish president’s three-country African tour and follows a visit to Sudan on Sunday, where he signed military and economic deals aimed at boosting two-way trade from the current level of $500 million a year to $1-billion.

Austrian PM Says Turkey Has No Place in European Union