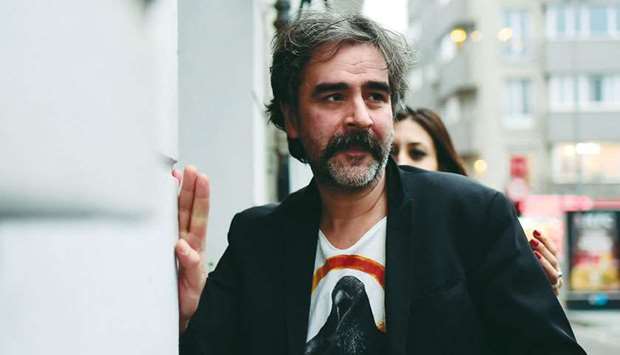 Turkish-German Journalist Deniz Yucel‘s release on Friday has unleashed a sense of relief and joy, but the way how he was freed cast doubt on the workings of the Turkish judiciary, generating political controversy over judicial independence in Turkey.

On Thursday, German Chancellor Angela Merkel and his Turkish counterpart Binali Yildirim met in Berlin. The hosting chancellor renewed her urge for the release of the journalist, a matter that bedeviled bilateral ties over much of the past year.

President Recep Tayyip Erdogan was adamant in his refusal to let Mr. Yucel, who was imprisoned last year on charges of “espionage and terror propaganda,” go. “As long as I’m in power, he will not be released,” he vowed, expressing no contrition over Turkey’s policy.

#German–#Turkish journalist #DenizYucel returned to his #Istanbul home after his release from over a year in jail on #terror accusations that strained ties between #Ankara and #Berlin
Yucel arrived at his home accompanied by his wife, smiling but looking tired pic.twitter.com/TIaLCiLvq5

But on Friday, all of a sudden, Mr. Yucal was on a diplomatic plane en route to Germany. He was freed by an Istanbul court. His abrupt release generated new debates over the machinations of the legal process in Turkey, bringing the question of political interference into sharper focus.

What made the discussion more pertinent was the aggravated life sentences given to six other journalists on the same day, fueling suspicion on the independence of courts.

It even surprised Mr. Yucel himself. In a video message, he said he was a given a court document saying that his detention would continue.

“Why I was released today and why I had been arrested a year ago; I still don’t know,” the journalist said, looking perplexed and confused.

Still, there were looming signs over Mr. Yucel’s potential release before Berlin meeting between two politicians. Ahead of the visit, Mr. Yildirim said he hoped that Journalist Yucel would be released soon.

“The courts are independent. But our job is to expedite and help their work.”

His remarks were read as an unwitting admission of political meddling in the judicial process in Turkey.

Garo Paylan, a lawmaker and senior politician from Turkey’s pro-Kurdish People’s Democracy Party (HDP), said Journalist Yucel had been kept as a hostage and was used in an international diplomatic bargaining.

He also drew a clear distinction between Mr. Yucel’s case and diplomatic wranglings of the past.  While states held back-channel dialogue in the past, the lawmaker argued, bargaining over Mr. Yucel’s release played out in plain sight, in a very obvious way.

“Days before the release of Mr. Yucel, this move by the Turkish side was expected. After only one year in office, Mr. [Sigmar] Gabriel, the acting foreign secretary, is fighting to keep his job in the new government to be formed in March,” Thomas Jager from the University of Cologne told Globe Post Turkey.

“The release of Mr. Yucel was this point to make to show his own party that he is indispensable,” he said, explicating how the domestic considerations drove German efforts to secure the journalist’s release before the formation of the coalition government in Germany.

Mr. Jager said Mr. Gabriel and others negotiated long for the release of Mr. Yucel.

The issue was so important for the German foreign minister that he even abruptly left the security conference in Munich, skipping a meeting of the Normandie group on Ukraine to participate in the press conference on Mr. Yucel’s release in Berlin.

Mr. Gabriel underlined that there was no back-channel deal regarding the release of the journalist, Mr. Jager noted.  But the remarks of German foreign minister met with skepticism in Turkey as well as in Germany.

“It is unthinkable that Ms. Merkel was not informed before the release. So she must have known about it when she held a press conference with her Turkish counterpart, Mr. Yildirim,” Mr. Jager said.

And it is unimaginable that this case was not solved on the highest level, he added with a caveat.

Mr. Yucel’s release may have a profound impact on the question: who will be the next foreign secretary of Germany?

When Mr. Yucel reunited with his wife outside the Silivri Prison in Istanbul, there was a mixed reaction from the Turkish public and colleagues. The sense of jubilation was negated by another disheartening news, the aggravated life sentences handed to prominent journalists.

The case of Turkish-German journalist has, according to many observers and critics, illustrated the politicized nature of judiciary in Turkey.

“It is power politics, stupid!” prominent political scientist and columnist Nuray Mert wrote in her column.

“I’m normally very happy when a journalist is freed from jail. Not so for German-Turkish journalist Deniz Yucel,” Ms. Mert wrote.

Instead, she added, “I felt bitter, not only because many more journalists still languish in prison, but also because the rapid “implementation of justice” came shortly after a meeting between Angela Merkel and Binali Yildirim, as if to highlight the influence of political power over the judiciary in Turkey.”

Ozgur Ozel, a senior politician from the Main opposition Republican People’s Party (CHP), was also critical of the way the journalist was released. He said the case was a proof of lack of judicial independence in Turkey.

“In Turkey, President Erdogan is the one who decides who would go to jail while it is European leaders to decide who would be released out of jail.”

On Friday, well-known journalists Ahmet Altan, Mehmet Altan, Nazli Ilicak, Fevzi Yazici and two others were sentenced to life in prison on “coup and terror-related charges.” The decision spurred international condemnation and widely regarded as a death blow to media freedom in Turkey.

“The release was politically useful I suppose,” he told Globe Post Turkey. Life sentences for three other journalists, he, however, argued, serve as a warning to everyone that those in control of the state can do whatever they want.