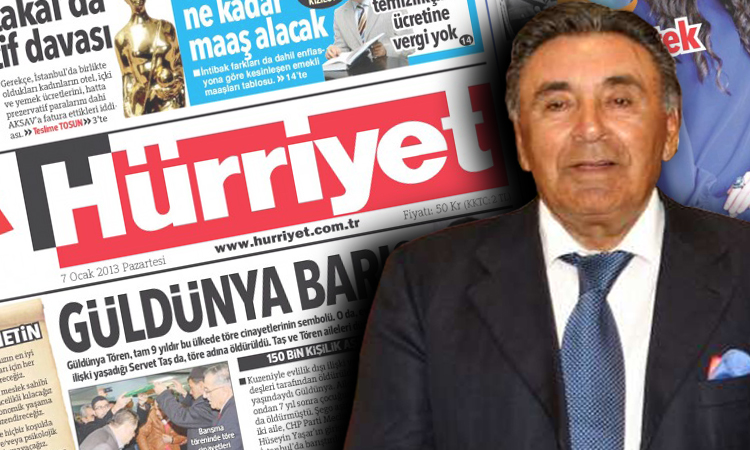 Turkish media tycoon Aydin Dogan reached a deal with another leading media boss to sell Hurriyet newspaper, the most influential outlet of Turkey’s mainstream media, and other outlets of Dogan Media Group after facing incessant political pressure, the Turkish media reported on Wednesday.

Erdogan Demiroren who bought Vatan and Milliyet dailies from Mr. Dogan in 2011 sealed the deal this week in a surprise move. Mr. Dogan who over the past decade scaled back its media empire after falling out with President Recep Tayyip Erdogan and sold several newspapers and TV channels.

Hurriyet daily was the flagship outlet of his media group and he never showed signs of willingness to sell it.

The news stirred frenzy in social media as government critics saw the sale as the expansion of government control over Turkey’s media landscape.

Turkey’s media has a history of turbulent relationships with the Justice and Development (AKP) government over the past decade. As the AKP cemented its rule with a string of election victories, the media landscape saw a gradual but steady change.

Dozens of newspapers and TV channels faced ownership changes. Since 2013, the government has openly begun to wield pressure on oppositional media.

Months before the coup attempt in 2016, it seized Zaman newspaper, which then had the largest circulation in the country. In the aftermath of the botched coup, more than 160 media outlets have been shut down and around 150 journalists have been placed in pre-trial detention.

According to Birgun daily, with the sale of Dogan Media Group to a pro-government media boss, the government’s direct control of Turkish media reached to levels unseen before. It, the daily reported, now controls nearly 90 percent of Turkey’s media.

In #Turkey, with the sale of the quasi-independent #Doğan media conglomerate to government-mouthpiece #Demirören group, 21 of the 29 dailies & 90 percent of the circulation will be under the direct control of #Erdoğan cronies, reports @BirGun_Gazetesi.https://t.co/8sGk13NEOX

“Following this acquisition, Turkey’s print and visual media, with the exception of a few dailies, will be entirely under the direct control of Erdogan’s cronies,” said Aykan Erdemir, former Turkish lawmaker and a research fellow at Washington-based Foundation for Defense of Democracies (FDD).

“It seems that the Turkish president no longer feels the need to maintain even the semblance of independent media in the country,” he said in an emailed statement to Globe Post Turkey.

He added: “The silver lining is that the handful of independent outlets that have managed to survive until now will see an increase in their readership as Turkish citizens desperate for real news will scramble to find alternative sources.”

The incident, without a doubt, marked a watershed moment for Turkey’s media in an unfavorable atmosphere for conducting journalism during the protracted state of emergency that shredded media freedom and individual liberties.

As recently as in February, three leading journalists have been sentenced to life in prison in a fatal blow to the profession. Earlier this month, more than a two dozen journalists received different amounts of jail terms.

According to the New York-based media watchdog, Committee to Protect Journalists (CPJ), Turkey is the leading country with 73 journalists are behind bars. The situation only gets worse despite mounting international criticism and calls from world organizations, rights groups and EU leaders over imprisoned journalists.

A Turkish court released prominent journalist Sahin Alpay after Constitutional Court ordered his release for the second time over violation of the right to fair trial. An Istanbul court, which oversees cases of Altan brothers and Mr. Alpay, however, ignored the top court’s order in January, igniting an uproar over the collapse of central pillars of Turkey’s judicial system after a lower court dismissed Constitutional Court whose rulings are binding and ultimate.

As Mr. Erdogan amassed more and more power both as prime minister and president, he managed to build a media ecosystem friendly to his political cause. In the late 2000s and early 2010s, he forced pliant businessmen to acquire certain outlets in mainstream media to enable his political agenda with a favorable editorial line.

As part of this particular strategy, Mr. Erdogan oversaw an ambitious takeover of leading newspapers and TV channels, once seen as touchstones of secular opposition media critical and suspicious of the Islamist AKP’s political trajectory, through his business cronies.

Sabah daily, which was part of Turkuaz Media Group, ATV, A Haber, Haberturk, Milliyet, Vatan, the pillars of mainstream secular media were purchased by pro-Erdogan businessmen. Changes in ownership of those media outlets marked a significant shift in the balance of power in the media landscape, tilted the equilibrium toward then-Prime Minister Erdogan’s government.

Mr. Erdogan’s fallout with Gulen movement pushed him to adopt a tougher stance against the press as authorities moved to seize Gulen-affiliated newspapers. The brewing contest between opposition media and the government culminated in an outright crackdown on critical outlets, a process that took an accelerating pace before and after the 2016 coup.

In 1998, then-Istanbul Mayor Erdogan was sentenced to several months in prison over reading a politically-tinged poem on charges of inciting social hatred and violating secularism. He was banned from politics for five years.

Then Hurriyet daily ran a headline Mr. Erdogan has never forgotten. “He Even Cannot Be A Muhtar [Village Head].” 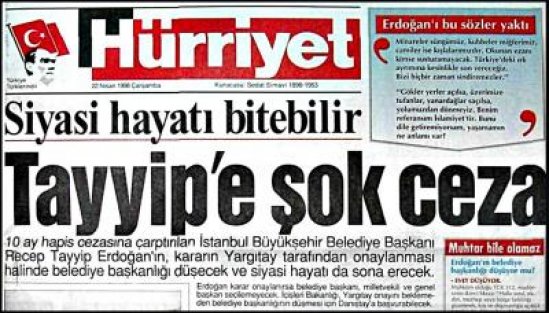 After reporting that former Istanbul mayor’s political career ended, the daily went further to note that he even would not be a muhtar, a neighborhood administrator or a village head in the hierarchy of Turkey’s administrative bureaucracy.

Though Mr. Erdogan, a rising political figure in the late 1990s, received mostly negative coverage by the secular Hurriyet during most of the period, that headline struck a particular chord. He never forgot the headline.

As if to respond to the newspaper two decades later, Mr. Erdogan, after becoming president, invited Turkey’s muhtars for more than 20 occasions in his presidential palace in Ankara. Last year, a leaked audio tape revealed the level of pressure Mr. Dogan had faced from political authorities over the past few years.

He told his editors to be less critical of the government. Not surprisingly, the last two years saw a more favorable coverage of the government in the Hurriyet newspaper, which emerged as the ardent supporter of colossal purge campaign in civil service.

Mr. Dogan reportedly told his close associates that he had no longer the stamina and eagerness to weather the political pressure and he was ready to give up. During a long career spanning more than four decades in the media business, Mr. Dogan managed to survive while others not. His long spell in media saw two military interventions and long periods of fragile coalition governments from 1991 to 2002.

He reached his apogee in the late 1990s and 2002 when he tried to steer political alliance talks between representatives of center-right politicians Tansu Ciller and Mesut Yilmaz, both served as prime ministers in 1990s, in his private mansion in the Greek island of Rhodes.

His media group was a staunch backer of the military memorandum that removed Islamist Welfare (Refah) Party from power in 1997 and mostly represented the worldview of military and secular business establishment of modern Turkey.

That career came to an abrupt end on Wednesday when an Erdogan associate purchased his entire media outlets after what seems a murky deal.