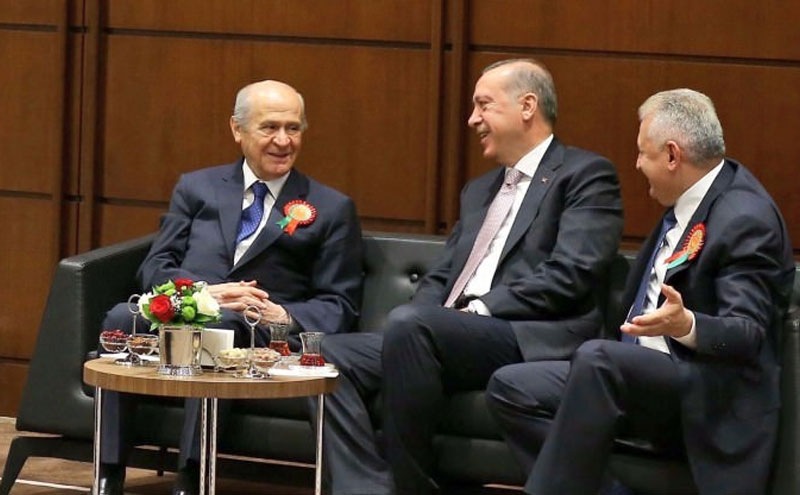 Although Turkey has been a year away from parliamentary and presidential elections, political horse-trading and wrangling for alliances are taking place to reshape the configuration of the political realm. In one such noticeable incident, President Recep Tayyip Erdogan‘s ruling Justice and Development Party (AKP) sealed a new electoral alliance with nationalists, solidifying the party’s drift to the nationalist wing of the right in the political spectrum.

After weeks of intense negotiations, the AKP finalized its agreement with Nationalist Movement Party (MHP) while it came closer to finishing talks with a junior nationalist party, The Great Unity Party (BBP).

The AKP, displaying a sense of alarmism after poor survey results over its fortunes, even elbowed aside concerns of losing its Kurdish base in southeastern Turkey, a major voting bloc split between a center-right Islamist-rooted AKP and pro-Kurdish, secular People’s Democracy Party (HDP).

The tilt toward a nationalist fold risks alienating religious Kurds who mostly supported Islamist-oriented Turkish parties against leftist Kurdish parties since the days of former Prime Minister Necmettin Erbakan in the mid-1990s.

The MHP, the major opposition party represents Turkey’s nationalists, has increasingly felt threatened by thrust of IYI (Good) Party into the political scene.

Led by former Interior Minister Meral Aksener, a nationalist firebrand, IYI Party threatens to undercut MHP’s prospects in next elections. A recent poll shows MHP below 10 percent electoral threshold. According to an Istanbul-based polling firm, MHP only gets 6.3% of the votes if a snap election is held today.

The issue is of great political consequence for Turkish politics. Looming signs of an electoral debacle were long brewing and prompted MHP leader Devlet Bahceli to call for lowering the threshold, which is notoriously high and was mostly designed to keep pro-Kurdish parties out of Parliament in the past.

“The MHP is not worried about the 10 percent threshold,” Mr. Bahceli said. He, however, warned that the possibility of staying below the threshold puts pressure on the society.

In November last year, he said 10 percent is too high for Turkey.

The case for the alliance with MHP also makes sense for President Erdogan’s AKP, which gets only 41.5 percent of the votes according to a Wednesday poll. The average of the recent surveys shows support for AKP and Mr. Erdogan’s bid for 2019 presidential elections hovering around 44 to 47 percent. With these figures, the president falls short of 51 percent to fulfill his life-long dream after a constitutional change ushered in the executive presidency as the new system of the land.

“The AKP’s “alliance” with the MHP is reflective of Erdogan’s efforts to consolidate control over traditional nationalists and is part of long-standing strategy of assimilating weaker parties of the right,” said Howard Eissenstat, a Turkey expert at St. Lawrence University and Nonresident Senior Fellow at the Project on Middle East Democracy (POMED).

“I think that the alliance represents a realization that the next election represents a sort of “end game” for Erdogan’s consolidation of power,” he told Globe Post Turkey.

One thing stands as the stumbling block for Mr. Erdogan is that even an alliance with MHP and BBP would not be enough.

“Whatever they do, they will not be able to succeed,” HDP’s newly elected co-chair Pervin Buldan said this week, expressing skepticism over the prospect of the grand nationalist-center-right alliance.

Main opposition Republican People’s Party (CHP) also slammed both AKP and MHP for the alliance. The CHP regards the deal as a bailout of MHP whose prospects are in steep decline.

The AKP and MHP held talks for months to hash out differences and hammer out a common strategy for elections. There will be a joint commission to elect a list of candidates both for parliamentary elections and local elections, giving say to MHP.

Both parties offered a draft bill in Parliament to lay the ground for a legal chance that could make their plan possible.

The news of the alliance generated a wider political controversy while stirring resentment within AKP base according to media reports. Some AKP lawmakers loathe that MHP politicians were already acting as if they were partners of the government.

In return for his favor, a pliant local court in Ankara blocked party congress in MHP, which could have removed Mr. Bahceli from his seat. Since then, he has emerged as an unflinching backer of President Erdogan in all platforms.

The party congress quarrel triggered splits within MHP, prompting Ms. Aksener and a team of senior figures to break with Mr. Bahceli. They later found IYI Party in late 2017.

“Clean or dirty, the results of the next election are a foregone conclusion,” Mr. Eissenstat said.

“Though unfair press coverage, use of government funds in support of the AKP, and harassment of opposition parties are now so routine that they will be employed as a matter, of course, I think Erdogan would like to avoid an obviously rigged election,” he noted, elaborating on the president’s push for a clear-cut mandate in next year’s election.

Alliances with the BBP and MHP, he argued in that regard help ensure that he won’t have stoop to the most obvious forms of manipulation.

The military offensive against Kurdish enclave of Afrin has galvanized nationalist fervor in the western parts of the country, with wide segments of society closing ranks behind the country’s leadership.

The support among Turks hovers around 85 percent.  On the other hand, Turkey’s military endeavor against People’s Protection Units (YPG), which is affiliated with the domestic insurgent group, Kurdistan Workers’ Party (PKK), has created a quandary for AKP regarding its relationship with its Kurdish constituency.

So far now 786, mostly Kurdish, people have been detained over critical remarks about ongoing Afrin operation. Many Kurds see the offensive as a war against Kurds, not against “YPG terrorists” as framed by Ankara.

Sociologist Mehmet Yanmis, a purged academic based in the southeastern province of Diyarbakir, told T24 news web portal that majority of Kurds in the city do not endorse the military campaign. Though they kept their criticism mostly private due to the toxic atmosphere of the emergency rule, social media became a platform to express anti-war feelings.

How Afrin operation would shape Mr. Erdogan’s and AKP’s standing in Kurdish-majority southeast remains a matter of controversy. According to Mr. Yanmis, AKP is losing Kurds whose emotional attachment to the country has taken constant hits in post-coup crackdown.

The collapse of fragile peace talks in 2015 and the subsequent outbreak of fighting between outlawed PKK militants and the Turkish security forces in the cities brought a new type of urban warfare that laid waste to urban centers, displacing hundreds of thousands of people.

PKK’s decision to bring the war to cities has drawn criticism from locals and residents who were most affected by the street clashes. It pushed them into the fold of AKP, which won back many votes in Nov. 1, 2015 parliamentary elections.

The post-coup crackdown has produced new lines of divisions among the Kurdish community. HDP co-chairs, lawmakers and thousands of members, political activists have been caught up in an ever-expanding clampdown to crush the Kurdish political movement.

“As best as I can tell, the AKP has the solid support of about half of Kurdish voters,” Mr. Eissenstat noted.

“Afrin might dampen support, but I don’t see the basic dynamics of the Kurdish vote changing. It remains an open question if the HDP, with its leadership largely imprisoned, will be able to rise above the 10% threshold,” he said in conclusion.

The party has elected new co-chairs two weeks ago after its iconic leader Selahattin Demirtas last month announced that he would step down to pave way for a leadership change, citing his imprisonment.