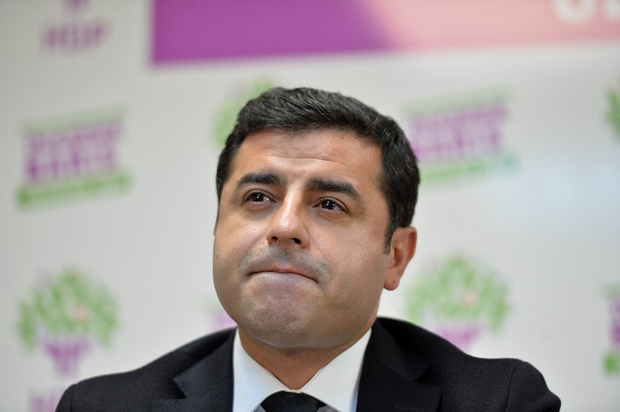 The promising career of jailed Kurdish leader has been inhibited during the state of emergency which unleashed the forces of authoritarianism with the erosion of pillars of democracy.

The jailed co-leader of Turkey’s main pro-Kurdish party has said he is not planning to run in any further elections, effectively ending a political career that threatened to shake Turkish politics.

Selahattin Demirtas is the best-known face of the Peoples’ Democratic Party (HDP) and a passionate speaker who led his party into parliament for the first time in June 2015 after setting the election campaign alight with his fiery rhetoric.

His political charisma, for many in Turkey, rivals that of President Recep Tayyip Erdogan and some observers have even dubbed him the “Kurdish Obama” after the former US leader.

But Demirtas has been imprisoned since November 2016 when he was among 12 HDP lawmakers rounded up under the state of emergency imposed after a failed coup in July that year.

He had previously run against Erdogan in the August 2014 presidential elections.

But Demirtas told Agence France-Presse in an interview that he would not run in the next elections in November 2019, when the executive presidency approved in a controversial referendum last year will come into force.

“I am not concerned about a political career. My only stance is to fight for democracy, freedom, human rights and peace,” he said in a written response to questions from AFP passed through his lawyers.

“I am determined to defend this stance always and everywhere. That’s why I do not have plans to be a lawmaker, party chief or presidential candidate.”

Following the interview with AFP, Demirtas separately confirmed last week that he would resign as HDP’s leader at the party congress on February 11 on grounds that he would likely remain in detention.

A former human rights lawyer, he is currently being held at a prison in Edirne, northwest Turkey, telling AFP he was sharing a cell measuring 12 square metres (130 square foot) with another detainee.

He is only able to see his family for one hour every week, he said, adding: “I try to keep my will strong with a lot of reading and writing.”

While in prison, Demirtas has managed to tweet through a third party but has also written poetry, produced artwork and penned a selection of short stories entitled “Seher” — or “Dawn” in Turkish.

‘Trying to Break my Will’

Among the charges against him are “managing a terrorist organization”, “making propaganda for a terror group” and “inciting criminal acts” in a case denounced by the HDP as “political”.

If convicted, he faces up to 142 years in jail.

Although his trial opened on December 7, he has yet to appear in court with supporters saying the aim is to silence him.

Demirtas and the HDP are accused of links to the outlawed Kurdistan Workers’ Party (PKK) which has waged an insurgency in Turkey since 1984 and is blacklisted as a terror group by Ankara and its Western allies.

Both Demirtas and his party strongly deny the allegations.

“The justice system in Turkey was always bad but right now, it is completely finished, helpless,” he said.

“They are trying to break my will by turning my detention into an actual punishment.”

There are a total of 96 cases against Demirtas, party officials say.

“Of course one day I will be freed, but this won’t be because of a fair judicial ruling but because of political developments,” he said.

Eight other MPs remain in jail including the party’s former co-leader Figen Yuksekdag who was stripped of her MP status in February 2016.

She stepped down in May last year as co-leader and was replaced by Serpil Kemalbay.

They were among over 55,000 arrested under the state of emergency imposed after the failed coup of 2016 — a measure which is likely to be renewed for a sixth time.

Barely a month after the HDP’s success in the June 2015 elections, the two-year ceasefire between the PKK and the Turkish state fell apart and intense fighting resumed.

Demirtas denounced the government’s approach to the “Kurdish problem”, telling AFP that Erdogan had always taken an “opportunistic” approach.

“They never handled the issue with an honest democratic understanding,” he said.

Kurds continue to be “pressured, restricted using violence and war,” he said, adding: “This is why the chance of a political solution looks very difficult.”