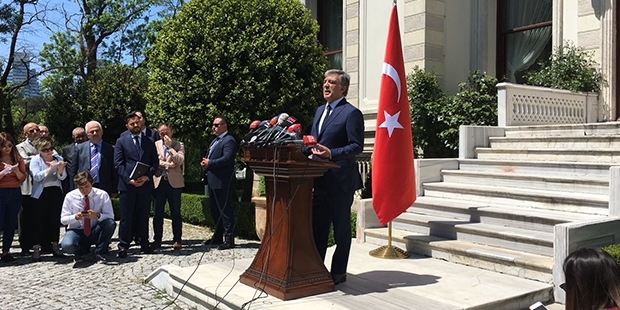 After a week of wild rumors and speculations, former President Abdullah Gul finally announced his decision on Saturday and said he will not run in the June 24 presidential elections, citing the lack of consensus among opposition parties around his name as the joint candidate.

President Gul emerged as the most credible figure who stands a chance against incumbent President Recep Tayyip Erdogan. Touting him as a potential joint candidate kept the political suspense at boiling pitch for a week. But he finally ended speculations around his name.

“Felicity Party leader Temel Karamollaoglu suggested me as a presidential candidate in the upcoming election. I told him that I would take the necessary steps if a very strong consensus was reached, but that wasn’t the case,” he said at a press conference.

During his address to reporters, the former president said Turkey faces great difficulties in internal and external conditions. At a time “when peace and security are needed,” he noted, “there is more polarization and anxiety.”

He steered clear of the offer when he saw other parties, main opposition Republican People’s Party (CHP) and Good Party seemed to be reluctant to endorse him. Good Party proposed chairwoman Meral Aksener as the party’s presidential candidate, while CHP is still looking for a strong figure for the party’s choice in line with demands of its base.

Part of the intransigence prevalent among party elites emanates from a disquieting experience of 2014 presidential elections.

Both the CHP and Nationalist Movement Party (MHP) agreed on a joint candidate, Ekmeleddin Ihsanoglu, former head of the Organization of Islamic Cooperation (OIC), against Erdogan in 2014 summer. With his Islamic credentials, the CHP hoped that he would have appealed to pious voters and some supporters of the ruling Justice and Development Party (AKP) as well.

That plan fizzled out.  The CHP base is, therefore, repulsed by the idea of having another political outsider as a candidate. Given that Ihsanoglu now announced his endorsement of Erdogan in repudiation of his past as a challenger to him, secular quarters of the political spectrum are extremely cautious to go through a similar process.

“We face serious survival problems of our history. We see that economic problems have reached serious levels,” Gul added during his address to reporters.

His speech also contained critical elements directed at his former comrades in AKP. The former president criticized incendiary language used by some AKP lawmakers against him.

He would not engage in mutual recriminations with his former friends, he said but urged AKP elites to make self-assessment and criticism.

Gul also said he shared his concerns and reservations with President Erdogan on several occasions about the direction of the country, adding that he endorses plurality in the country, highlighting democracy and rule of law.

Though Gul is seen a moderate and amenable figure in comparison to Erdogan, he is no reassuring figure. His record and image of being in cahoots with then-Prime Minister Erdogan during last years of his presidential spell in early 2014 when AKP government enacted anti-democratic laws undermining rule of law and the integrity of institutions have not been forgotten.

CHP Deputy Chairman Engin Altay praised Gul for his frankness and emphasis on the rule of law, democracy, separation of powers and social peace.

But AKP side appeared unsatisfied with Gul’s rationale for his rejection of the candidacy. Senior AKP figures, including Justice Minister Abdulhamit Gul, criticized the former president for not outright refusing candidacy offers.

The nature of the relationship between Gul and Erdogan, he noted, would require saying No to every offer from the beginning, the justice minister noted, expressing dismay over Gul’s engagement with other political parties.