Turkish Foreign Minister Mevlut Cavusoglu shrugged off criticism over Turkey’s purchase of the Russian S-400 missile system while addressing leaders of member countries during NATO Summit in Brussels and placed the blame on Ankara’s allies for failing to meet its pressing demands for critical weapon systems.

Speaking at a panel discussion before the summit, Cavusoglu said that Turkey tried to buy air defense system from the U.S. for the past 20 years.

“It is my urgent need and I tried to buy from many other countries — including China, but I get the best deal from Russia, and I bought it,” Cavusoglu said. “I tried to by from my allies.”

Our greatest strength within #NATO is solidarity and unity. We must act in line with these principles without exception. This is also the case regarding Turkey’s fight against all forms of terrorism. In this fight, we expect full solidarity from our allies. #NATOSummit pic.twitter.com/8dlFC3Cn7o

NATO previously warned that the S-400s would not be interoperable with its systems.

A number of U.S. senators broached the idea of sanctions against Turkey and even introduced a bill that was accepted by both chambers of the U.S. Congress. Despite its actions, Lockheed Martin, with approval from Pentagon, proceeded ahead with scheduled delivery of the first F-35 fighter jet to Turkey in a rollout ceremony in Texas last month.

He called on other NATO members to double their military spending. 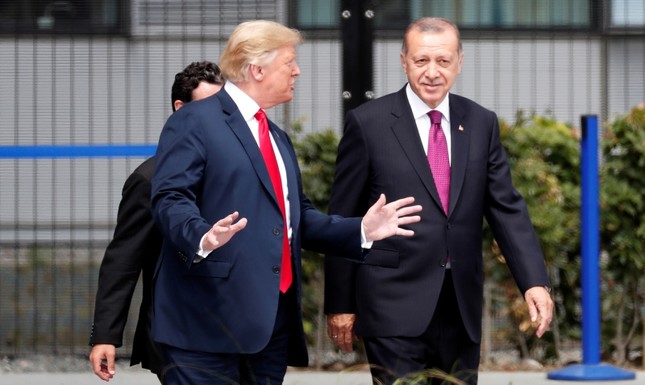 President Erdogan and his U.S. counterpart had a chance for brief conversation and chat on the sidelines of the NATO meeting.

NATO Pledges to Support Turkey Against Security Challenges From Syria

NATO pledged to provide essential measures for Turkey against potential challenges from Syria.

“Assurance measures continue to provide the fundamental baseline requirement for assurance and deterrence,” statement by NATO said. “In addition, tailored assurance measures for Turkey to respond to the growing security challenges from the south contribute to the security of the Alliance as a whole, and will be fully implemented.”

The statement pointed to the ongoing conflict in Syria and the challenges allies.

“Syria has a significant inventory of short range ballistic missiles whose range covers part of NATO’s territory and some of our partners’ territories. Syria has used these missiles extensively against its own population,” the statement reads.

It added: “We remain concerned that Turkey has been hit three times in the last four years by missiles launched from Syria. We continue to monitor and assess the ballistic missile threat from Syria.”