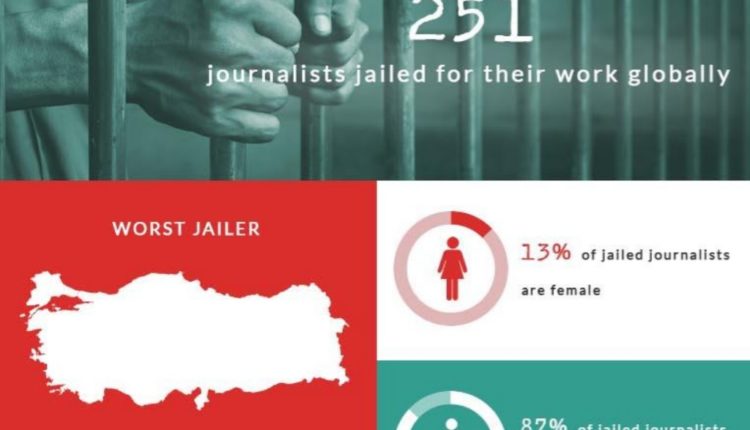 U.S.-based Committee to Protect Journalists (CPJ) released its annual report for 2018 on Thursday, naming Turkey as the largest prison of journalists with at least 68 media employees kept behind bars.

According to the report, Turkey, China, and Egypt were responsible for more than half of those jailed around the world for the third year in a row, while over 251 journalists are imprisoned around the world in connection with their proffesional work.

China, Egypt and Saudi Arabia imprisoned more journalists compared to last year, whereas Turkey has slightly decreased the number of jailed journalists this year, the report determined. However, it did not affect Turkey’s position as the “worst jailer of journalists”.

CPJ pointed out that around 70 percent of those imprisoned globally are charged with “anti-state” crimes, which typically signifies being member or supporter of groups designated as “terrorist organizations” by a particular government.

Saudi Arabia, which has come under the spotlight since the the murder of dissident journalist Jamal Khashoggi in the country’s Istanbul consulate, was also mentioned in the report. CPJ stated that the Saudi government stepped up its repression on media and had 16 journalists behind bars as of December 1.

“Even as Turkish President Recep Tayyip Erdogan has been the fiercest critic of Saudi Arabia for the murder of Khashoggi, his government continued to jail more journalists than any other on the planet,” the CPJ report commented, adding that every journalist imprisoned in the country is facing “anti-state charges, for the third consecutive year.

The report highlighted that Turkey intensified its crackdown on the media following 2016’s failed coup attempt, shutting down more than 100 news outlets.