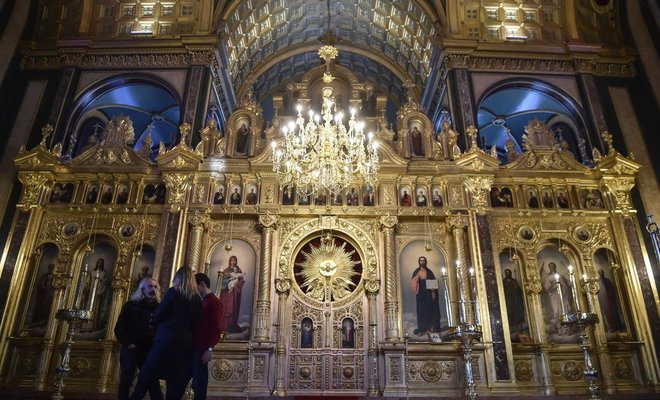 In a display of gesture, Turkey re-opened iconic ‘Iron Church’ in Istanbul on Sunday following seven years of restoration.

The leaders of Turkey and Bulgaria came together for the opening ceremony of the Bulgarian St. Stephen’s Church in Istanbul, a gesture of harmony in an often turbulent relationship between the two neighbors.

The Bulgarian Orthodox church in Balat, a historic Istanbul neighborhood on the shores of the Golden Horn traditionally home to Christians and Jews, was built in 1898 after its original wooden structure was destroyed in a fire.

Made out of cast iron, the iconic ornate building has been dubbed the “Iron Church.”

For President Recep Tayyip Erdogan, who hosted Bulgaria’s conservative Prime Minister Boyko Borisov, the ceremony was a riposte to charges that Turkey’s Islamic-rooted government does not do enough to protect the rights of Christian minorities and their heritage.

“Istanbul has shown once again to the entire world that it is a city where different religions and cultures peacefully co-exist,” President Erdogan said.

He said it was the “states’ responsibility to safeguard freedom of worship for all people regardless of their faith or ethnic origins.”

In an appeal to minorities in Turkey, Mr. Erdogan said: “You are free to practice your religion and you are under our protection.”

Bulgaria, which holds the rotating EU presidency for the next six months, shares a 270-kilometer (165-mile) border with Turkey.

Speaking during the ceremony, Mr. Borisov said: “Today, I am sure, the whole of Europe and the Balkans will see how the ethnic tolerance is an example to follow in one Christian and in one Muslim country.”

“The symbolism of this day is a symbolism towards Europe. Turkey is the biggest neighbor of the EU, with the biggest army in Europe,” he said in his first visit abroad only days after Bulgaria took over the EU presidency.

“We must make in 2018 the relations between the EU and Turkey such as they were several years ago, to normalize them.”

Turkey is home to more than 200,000 ethnic Turks with Bulgarian passports who left Bulgaria during the communist era.

Bulgaria, meanwhile, is home to a 700,000-strong ethnic Turkish minority, a legacy of the Ottoman empire.

The reopening of the 120-year-old church is also seen as a sign of appeasement after a spat erupted ahead of Bulgarian elections last March and a Turkish referendum on expanding Erdogan’s power.

Sofia had accused Ankara of meddling in its polls, summoning Turkey’s ambassador and recalling its own envoy from Turkey for consultations.

But in a show of cooperation, Bulgaria and Turkey co-funded St Stephen’s restoration, one of the world’s oldest prefabricated cast iron churches. It cost over 15 million lira (3.3 million euros, $4 million).

The iron elements were produced in Austria in the 19th century and shipped to Istanbul via the Danube and the Black Sea.

Vasil Liaze, president of a foundation overseeing the church, told Turkish media the church had been restored under so-called rules of reciprocity.

This means Sofia has given the green light for the Cuma (Friday) Mosque in Bulgaria’s second city of Plovdiv to be restored in return.

Mr. Erdogan said he hoped that the church’s reopening would be “source of inspiration” for future cooperation with Bulgaria.

His government insists it has passed reforms to improve minorities’ rights including legislation allowing minority groups to buy and renovate their properties.

In June 2014, when prime minister, the Turkish leader said the government had returned to minority foundations confiscated assets worth over $2 billion.