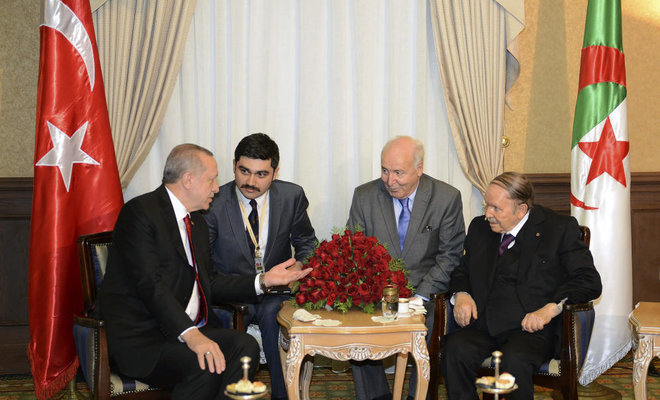 President Recep Tayyip Erdogan‘s five-day trip to African countries aims to expand Turkey’s influence in the rapidly developing continent and diversify its economic engagement amid strained ties with the West. But as Ankara extends its reach especially in the eastern part of Africa, it raises eyebrows in the Arab World, fuels doubts on Turkey’s ambition and the exact nature of its deepening ties.

On Monday, the Turkish leader landed in Algeria. During the visit, Turkish and Algerian firms signed a deal worth of $1 billion to build a polypropylene production plant in Turkey. The initiative will be jointly carried out by Algeria’s state-run energy and chemicals company Sonatrach and Turkish firms Ronesans and Bayegan.

“We see Algeria as an island of political and economic stability in the region. Our first trading partner in Africa is Algeria,” President Erdogan said, praising the developing trade between two countries.

“But the investments and trade will gain in volume as the work of our businessmen in Algeria is facilitated,” the Turkish leader said, according to AFP.

The current trade deal hovers around $3.5 billion and both countries are eyeing to target $10 billion in the years to come.

The Turkish leader’s next stops will be Mauritania, Senegal and Mali. The trip stands as a complementary to the president’s East Africa tour late last year. His visit to Sudan in December stirred up a tension with Egypt after a deal to build a naval dock and military base in a Sudanese island in the Red Sea.

It is in this area where a new regional jostling for influence has emerged.

“Except for Egypt, Turkey is viewed – in the Arab Sunni world – as a balancing force against Iran and its allies (Iraq, Syria, and Lebanon),” Riyadh Mohammad, an expert on the Middle East affairs, told Globe Post Turkey.

“Nevertheless, and since 2013 coup in Egypt, Turkey became involved in a regional struggle of influence with the Saudi – Egyptian – UAE axes. Turkey’s great relations with Qatar, the Muslim Brothers, and now Sudan are making a de facto counter axis to the Saudi -Egyptian reign of influence,” he said.

Mr. Mohammad thinks that Turkey’s involvement in African affairs and the Red Sea makes the Egyptians, the Saudis, and the Israelis uneasy and concerned. This means a pro-Muslim Brothers regional power is now in their backyard – after dealing with it in other areas.

Turkey’s involvement in the Red Sea could lead to further instability in the region and might cement the Saudi – Egyptian alliance and could lead to more cooperation with Israel. The new gas agreement with Egypt might be an indirect result of an increasing Turkish role in the region, he argued.

Turkey’s relations with the African continent, and especially North Africa, has dramatically increased over the past decade. Ankara has opened dozens of embassies in countries where it previously lacked diplomatic representation.

At the moment, both Saudi Arabia and Egypt are wary of Turkish geopolitics, because of the realignment of Sunni powers over the Qatar dispute, said Muqtedar Khan, Professor of Islam and Global Affairs at the University of Delaware.

He noted that Turkey has aligned itself with Qatar to some extent. Turkey and Egypt remain in a tense relationship ever since the counter-revolution against the Morsi government.

“So the expansion of Turkish influence in Syria and Qatar, and now in the MENA region will be seen as a move towards the establishment of regional hegemony,” he told Globe Post Turkey. “Until now Saudi Arabia was the leader of the Islamic World and Egypt of the Arab World, but Turkey’s entry in the MENA region challenges both those positions.”

Turkey under the Erdogan leadership is reorienting its foreign policy in a way to reduce its dependence on economic ties with the West. The simmering row with the U.S. over Turkey’s military offensive in northern Syria and the tense relations with the EU push Ankara to engage in other regions, develop ties with Asian and African countries.

But its ambitious agenda stirs backlash regional countries, especially when Turkey announced the building of a military base on a Sudanese island in the Red Sea.

“Although both Sudan and Turkey denied any plans for a military base in Suakin (Sawakin), Egypt and Gulf monarchies are likely to see the Turkish move through the prism of their struggle with the Muslim Brotherhood in the region in the wake of the “Arab Spring,” said Musa Murawih, an expert on media, politics and history of the Arab World at the University of Denver.

He told Globe Post Turkey that these Gulf countries are now allied with [Abdelfattah] Sisi of Egypt, with the apparent goal of not only keeping the pre-Arab Spring regimes in power but also preventing the Muslim Brotherhood from coming to power in any future change in this restive region.

Turkey and Sudan, both seen as ruled by the Muslim Brothers, do not necessarily have the same goals, he added. “Turkey is probably thinking more trade with inner Africa (via Sudan) and the Red Sea region, with any push for direct political influence in the continent coming secondary at this time.”

Sudan, on the other hand, is likely scoring points with Egypt, on a few fronts, chief among them the dispute over the Halayib Triangle, which is located close to Suakin, he said, explaining the motive drove Sudan’s closer engagement with Turkey.

While Erdogan’s visit this week takes place in Western African countries, what concerns the Arab world and regional powers such as Saudi Arabia and Egypt is Ankara’s ambitious outreach in the Red Sea and MENA region.

So I would say it is likely all part of the shifting alliances and the uncertainty currently engulfing the region. Regimes are trying to rethink their old strategies and alliances in an attempt to secure their existence in an unpredictable political environment, Mr. Murawih added in conclusion.