Trump to Erdogan: US Will No Longer Send Arms to Kurdish YPG 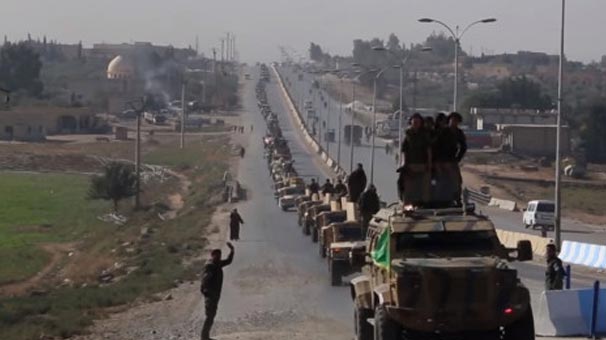 Turkish Foreign Minister Mevlut Cavusoglu, who was present at the Turkish president’s office during the phone conversation between two leaders, informed media about Mr. Trump’s pledge.

The U.S. military alignment with Syrian Kurds remains to be a source of enduring friction between the two NATO allies. Ankara sees People’s Protection Units (YPG) as a terrorist group due to its links to Kurdistan Workers’ Party (PKK), which is listed a terrorist organization by the U.S., E.U. and Turkey.

“Mr. Trump clearly stated that he had given clear instructions and that the YPG won’t be given arms and that this nonsense should have ended a long time,” he said.

A readout released by the press office of Turkish Presidency said Mr. Erdogan and Mr. Trump exchanged views on Syria and Sochi summit.

“The leaders discussed bilateral issues between Turkey and the U.S., and regional developments. Both leaders agreed to improve ties and jointly fight against all terrorist groups,” the statement read.

“President Trump reaffirmed the strategic partnership between the United States and Turkey, particularly in combating terrorism in all its forms and fostering regional stability,” a White House statement said about the content of the phone call.

“Consistent with our previous policy, President Trump also informed President Erdogan of pending adjustments to the military support provided to our partners on the ground in Syria, now that the battle of Raqqa is complete and we are progressing into a stabilization phase to ensure that ISIS cannot return,” the statement said, confirming the Turkish foreign minister’s remarks about suspending arms supply to the Syrian Kurds.

“President Trump and President Erdogan underscored the need to end the humanitarian crisis, allow displaced Syrians to return home, and ensure the stability of a unified Syria free of malign intervention and terrorist safe havens.”

Turkish Prime Minister Binali Yildirim visited the U.S. in early November. Turkey-U.S. relations have plunged into a series of disputes that bedevil a meaningful cooperation in Syria and construct a healthy diplomatic dialogue.

Turkey’s demand for the extradition of U.S.-based cleric Fethullah Gulen, a trial in a Manhattan court where nine Turkish citizens, including former Economy Minister Zafer Caglayan, deputy CEO of state-run Halkbank and prominent businessman Reza Zarrab were indicted for evading U.S. sanctions against Iran, and the U.S. alignment with Syrian Kurdish militia appear to be major points of discord between two allies.

Erdogan Does Not Rule Out Cooperation With Damascus Against Syrian Kurds

Erdogan to Become First Turkish President to Visit Greece Since 1952