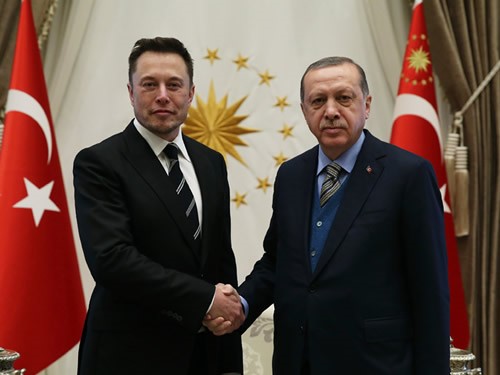 Last week, a consortium of five Turkish companies coalesced around a long-standing project to a produce Turkish-made car, an ambitious dream testimony to the country’s aspirations for being a technological prowess.

President Recep Tayyip Erdogan announced the move in a ceremony with great pomp, demanding a pledge from firms to finish the project of a local electric car by 2019.

Only a week after, Elon Musk, the wizard of high technology in the automobile industry and founder of Tesla, met with the Turkish president in Ankara on Wednesday.

Mr. Musk, who is also CEO of SpaceX, is expected to attend Global SetShow in Turkey, a global event scheduled for November 9 and 10.

President Erdogan’s office informed the Turkish media about the meeting in Presidential Palace in Ankara.

Turkey has long harbored a strong desire to have a locally produced car. That ambition took a particular character and urgency when President Erdogan pushed leading Turkish companies to launch a joint venture to fulfill his political dream.

He wants to completion of the project before 2019 presidential elections when he seeks to secure another term, this time for an executive presidency after constitutional amendment accepted in a referendum this year heralded a new system.