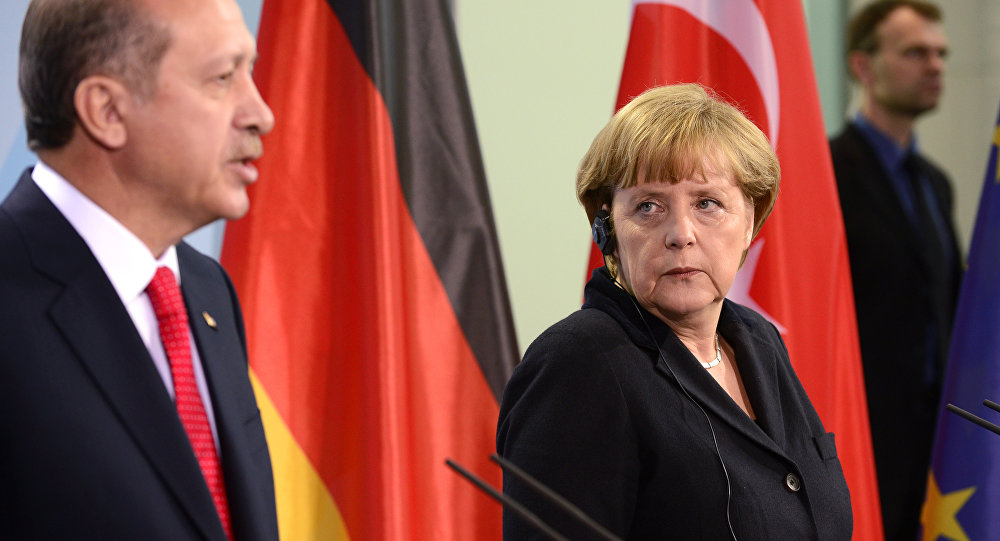 German Chancellor Angela Merkel said on Friday that more evidence and objective findings are needed in order to designate the Gulen movement as a “terrorist organization” in the face of Ankara’s request, during a joint press conference after talks with Turkish President Recep Tayyip Erdogan.

Responding to a reporter’s question about Turkey’s appeal for Germany to declare the Gulen movement, which the former blames for 2016’s failed coup attempt, a “terrorist group”, and its call for support against the outlawed Kurdistan Workers’ Party (PKK), Merkel was quoted as saying:

“I can tell you that the PKK is banned in Germany, as well as all of its activities. We did not go into details today. But we did in our previous meetings [with Erdogan]. As for FETO [Fethullahist Terrorist Organization – a name coined by the Turkish government in reference to sympathizers of U.S.-based Islamic cleric Fethullah Gulen], of course we take Turkey’s arguments very seriously, but we need more information and objective findings. We need more evidence before we can equate it with the PKK. There are wanted people in Germany, as well. We weren’t successful in some cases. We are not sure whether some of those people are in Germany, investigations are ongoing.”

The German chancellor emphasized that in some instances, Turkish prosecutors have not even drafted an indictment. With regards to the 2016 coup attempt targeting Erdogan, she reiterated that Germany has strongly condemned the incident that claimed over 200 lives. However, she implied that there is need for more evidence about the Gulen movement’s connection to it.

Speaking at the joint press conference, Erdogan told the media that “thousands of PKK members” and “hundreds of FETO members” live in Germany. Referring to the bilateral extradition treaty between the two countries, he added that it would make things easier if German and Turkish intelligence units work together to find and extradite wanted individuals to Turkey.

Merkel, on the other hand, pointed out that there are still German citizens who are under arrest in Turkey, adding that the two countries have disagreements in terms of press freedom and rule of law.

Another highlight of the press conference was when a journalist was thrown out of the hall after asking a question relating to judicial independence in Turkey.

Commenting on the issue, Erdogan claimed that Turkish judiciary is independent and that courts sometimes rule in ways he does not agree with.

Praising Erdogan’s performance in Syria’s Idlib, Merkel also said that she and the leaders of Turkey, Russia and France planned to hold a summit next month on the situation in war-ravaged Syria.

Erdogan asks for extradition of journalist, calls him a ‘spy’

Leading Turkish journalist Can Dundar, who is wanted by Turkey for “espionage” and currently based in Germany, was also a key topic of discussion at the press conference.

Erdogan called Dundar “a spy, who disclosed classified information”, saying that it is perfectly normal that Turkey is asking for his extradition. He asserted that if Germany asked to get a German citizen extradited, he would send them “without even thinking”.

Dundar, who was the editor-in-chief of prominent daily Cumhuriyet, was sentenced to five years and 10 months by a Turkish court, after releasing footage allegedly showing weapons carried in two trucks en route to Syria belonging to the country’s National Intelligence Organization (M.I.T.).

Dundar later announced that he would not participate in the event, saying: “Erdogan was going to cancel this press conference using me as a pretext. I did not want to be a tool for this.”

Merkel, commenting on the Dundar crisis at the conference, clarified that it was the journalist’s decision not to attend. “I can confirm that my opinions are different from those of Mr. President regarding him [Dundar],” she added.

Berlin Police Officer Under Investigation Over ‘Spying For Turkey’